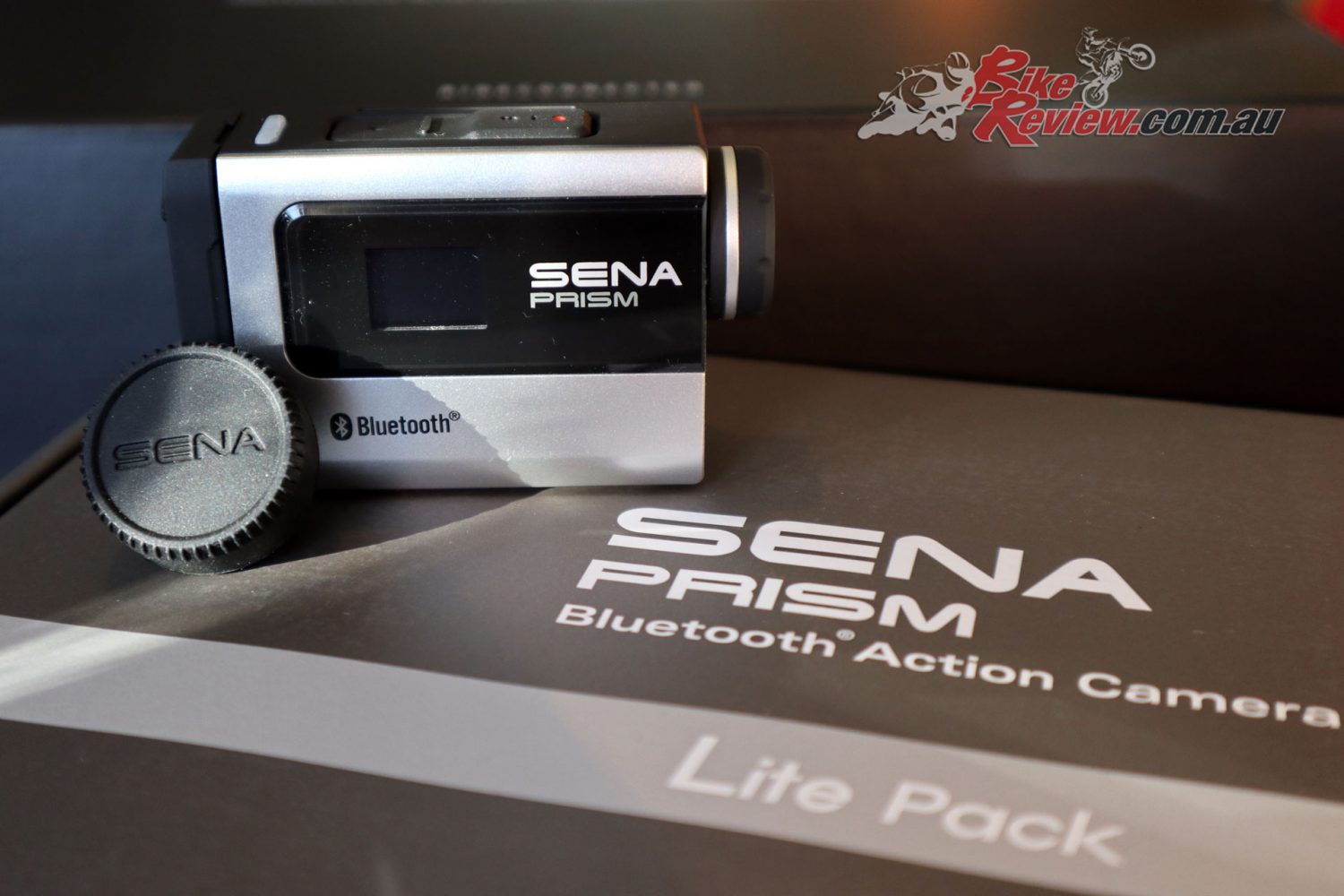 Sena's Prism Action Camera offers a great option for those looking to record on board voice audio over footage, in an easy seamless way, while still providing strong video quality and battery life...

If you’ve been following our review of the Shoei Neotec II modular helmet, as well as the Sena SRL Communication system designed specifically for it, then you may have also realised I’ve added an additional piece of Sena gear to the setup – the Sena Prism action camera. 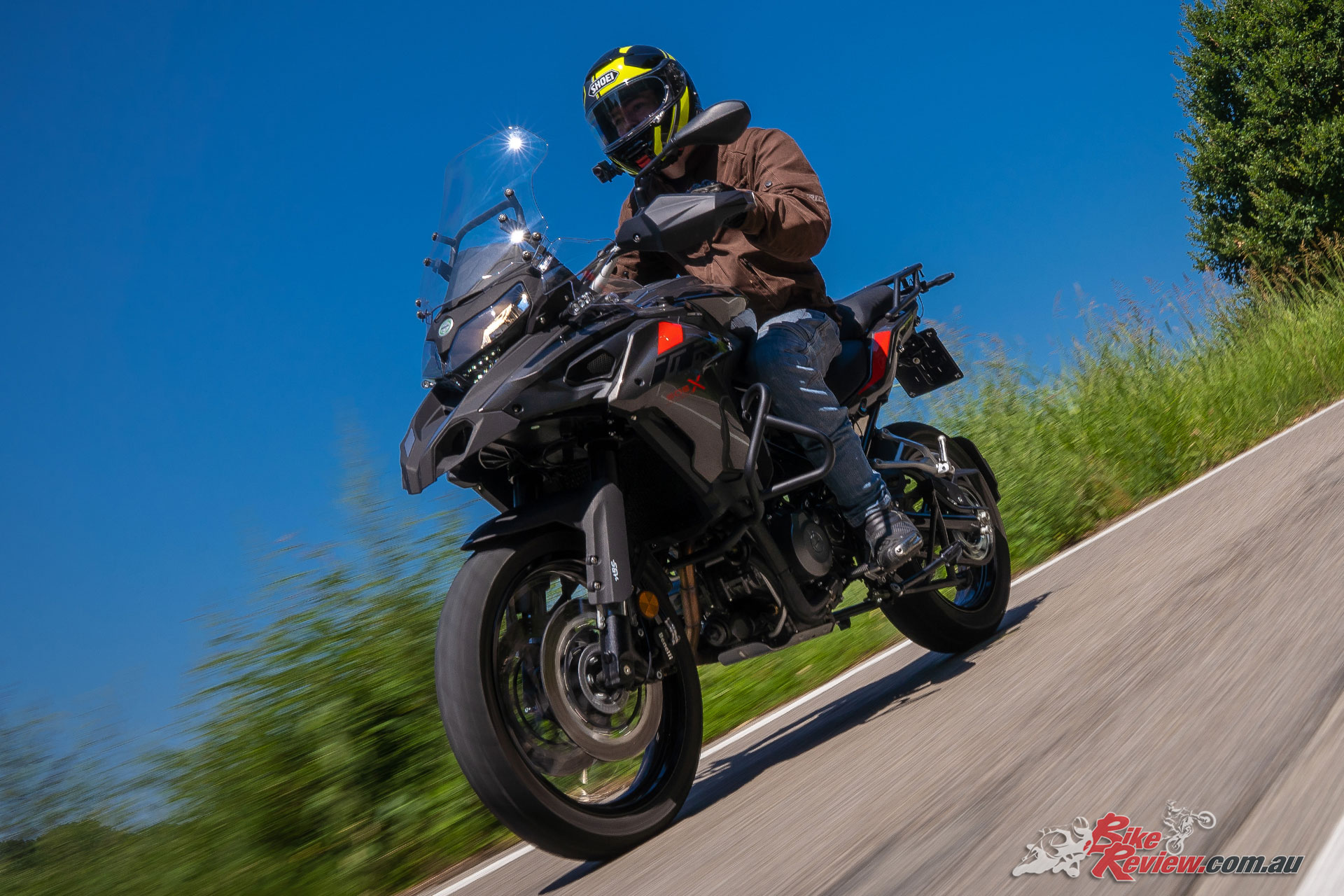 Testing out the Shoei Neotec II, with the Sena SRL and Prism in Italy on the Benelli TRK 502X

While we normally run a GoPro Hero5 Session, or Contour cameras, the Sena Prism is capable of recording from Sena communication systems audio for your video, which means you can record your thoughts while riding, or in our case record high quality audio over on board footage, without having to do later voice-overs, and complicated audio mixing. 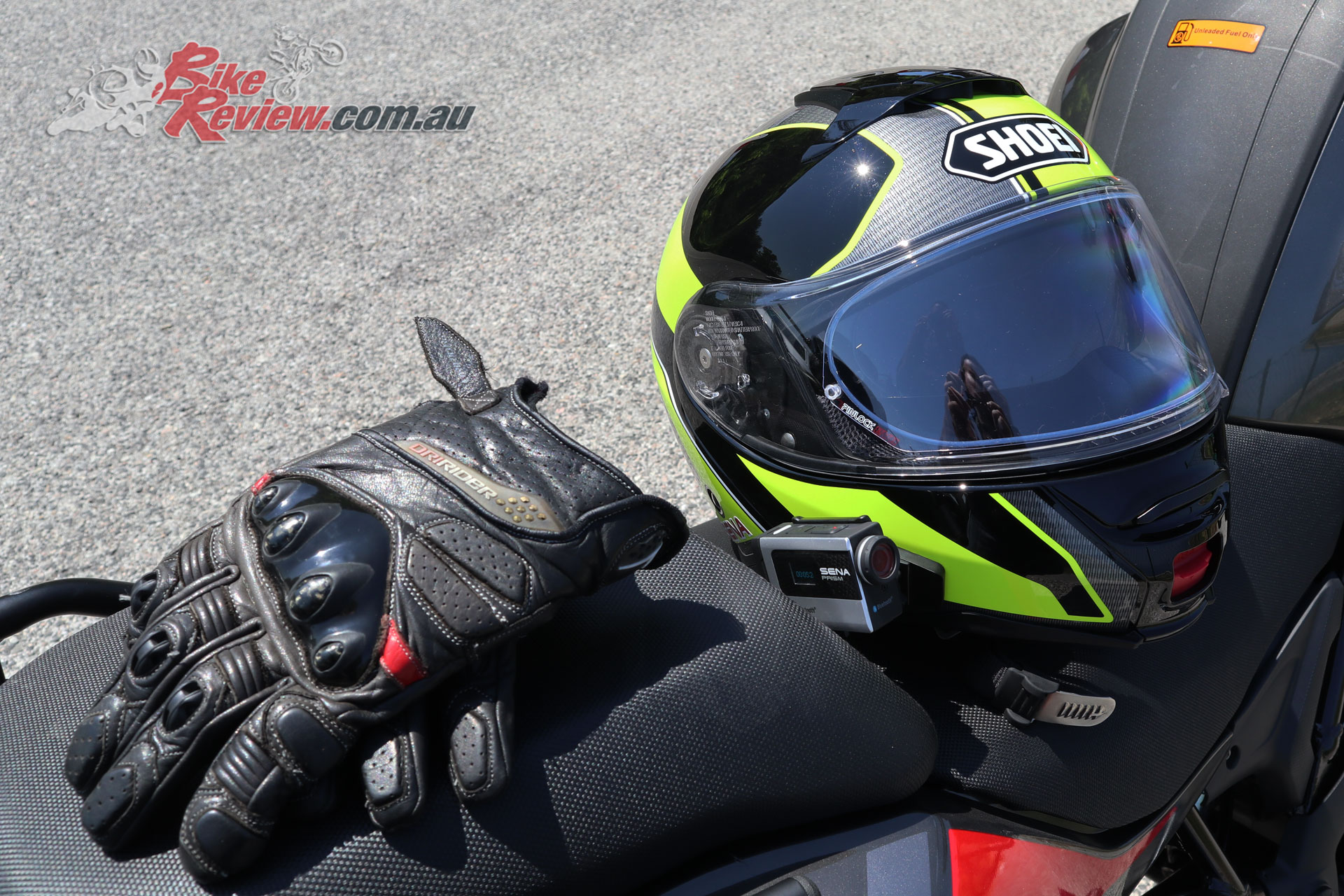 This all works through the Sena SRL communication system which boasts wind canceling and ambient noise reduction technology for capturing quality audio, which is what is also required for phone calls and intercom duties. 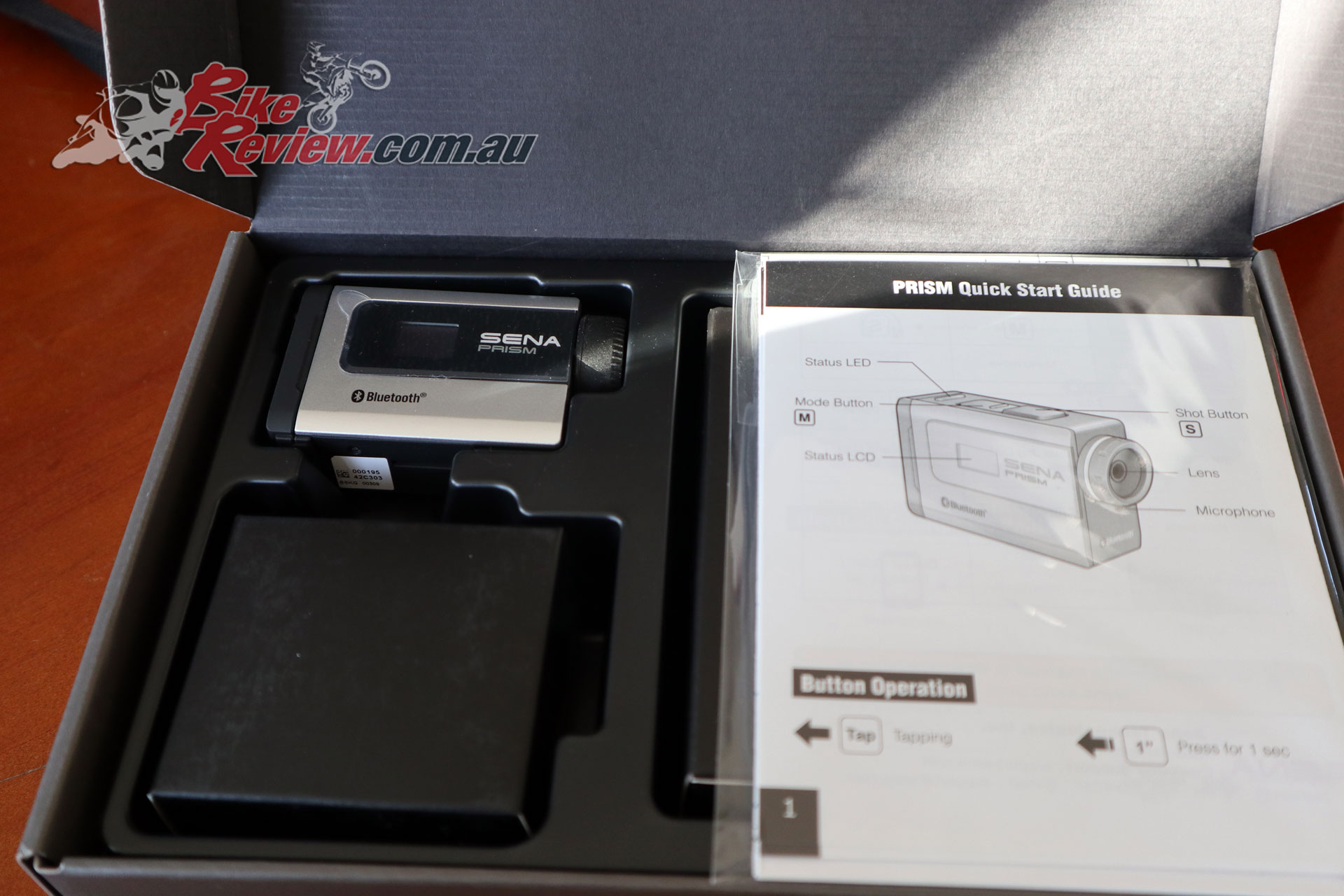 The Sena Prism Lite pack offer a smaller variety of mounts, but is good value

It’s worth mentioning when the Prism first arrived the Sena SRL software didn’t yet support this feature, but getting in contact with Sena Australia they were extremely helpful and chased it up, with a software/firemware update coming out shortly after and getting everything working. Contacting the International Sena help centre website on the other hand… lets just say they should take some tips from their Aussie distributor and leave it at that! 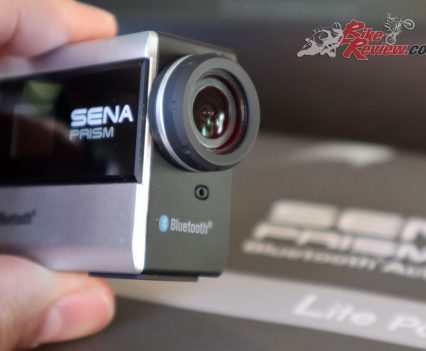 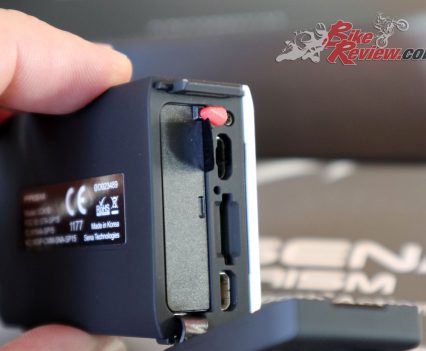 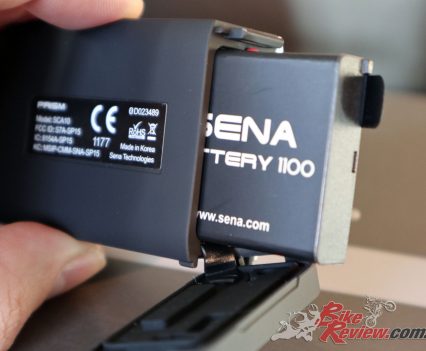 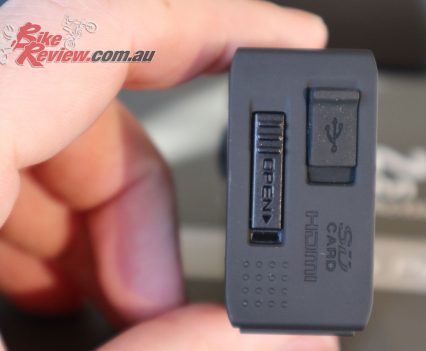 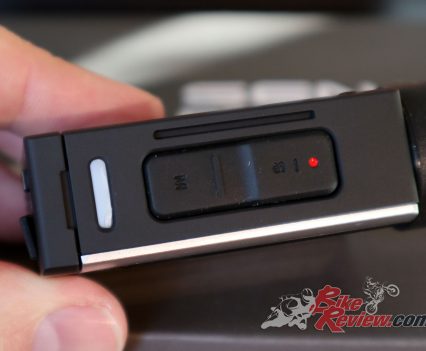 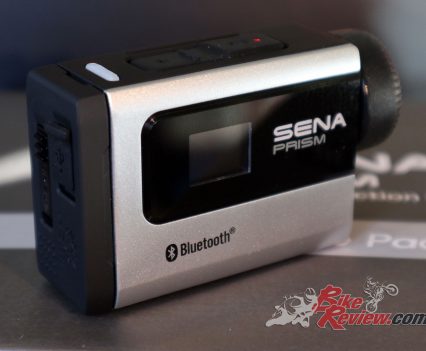 I bought the Sena Prism Lite pack which comes with a few less fixtures, but to be honest there’s good variety provided, especially for mounting to a helmet, while the camera features a traditional camera mounting thread, for use with a tripod or other generic mounting systems.

I run the camera mounted to the side of my helmet with the provided system, which I put on upside down, but works a treat and I’ve also got another mount I’ve been meaning to add to either the Project Ninja 400 or my Daytona 675R for some extra viewpoint options. 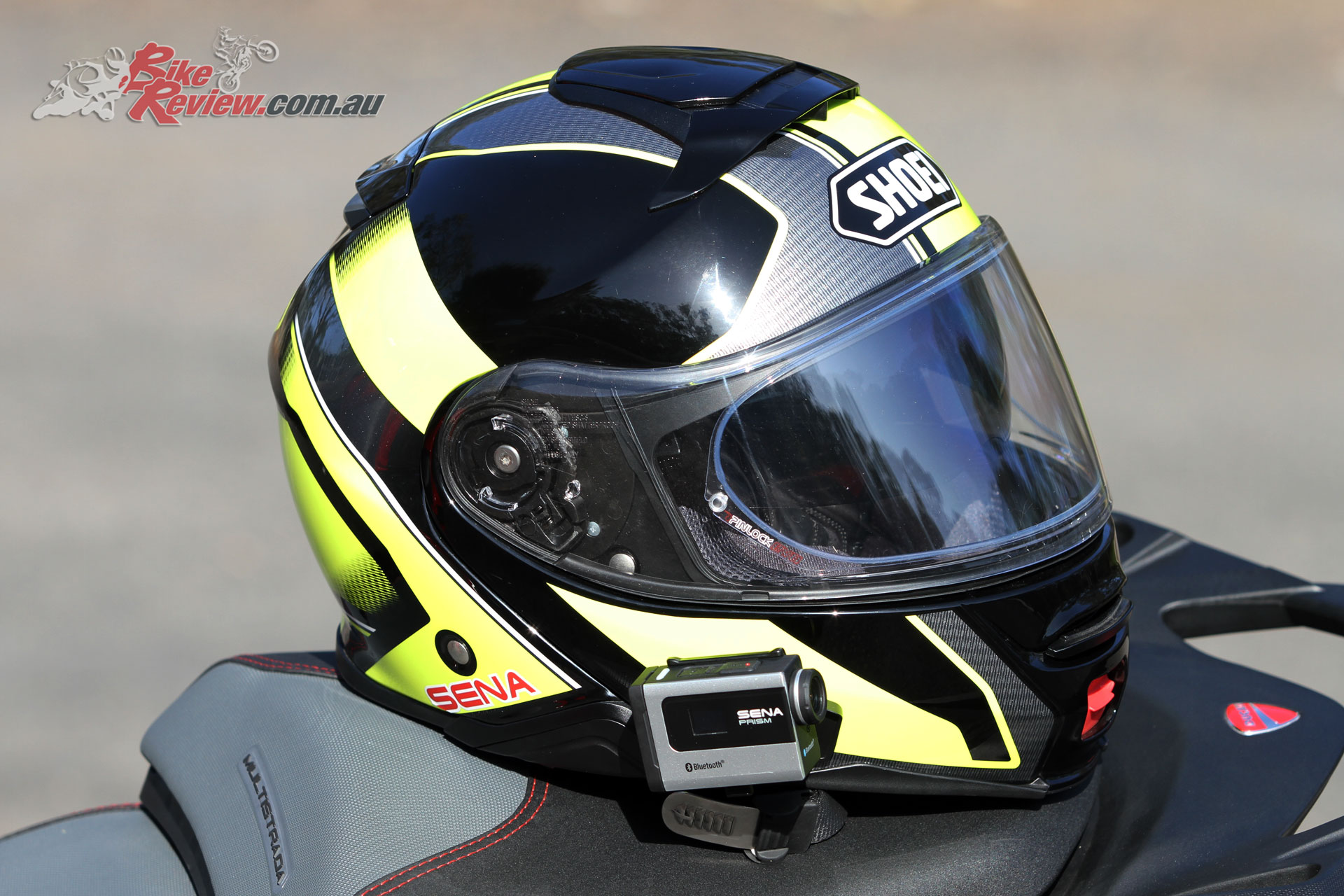 Audio quality is good, although having the visor or vent slightly open can cause a bit of wind noise, which becomes more noticeable at highway speeds. With everything closed up however it’s good, and adding a dead cat wind protector should further help here. 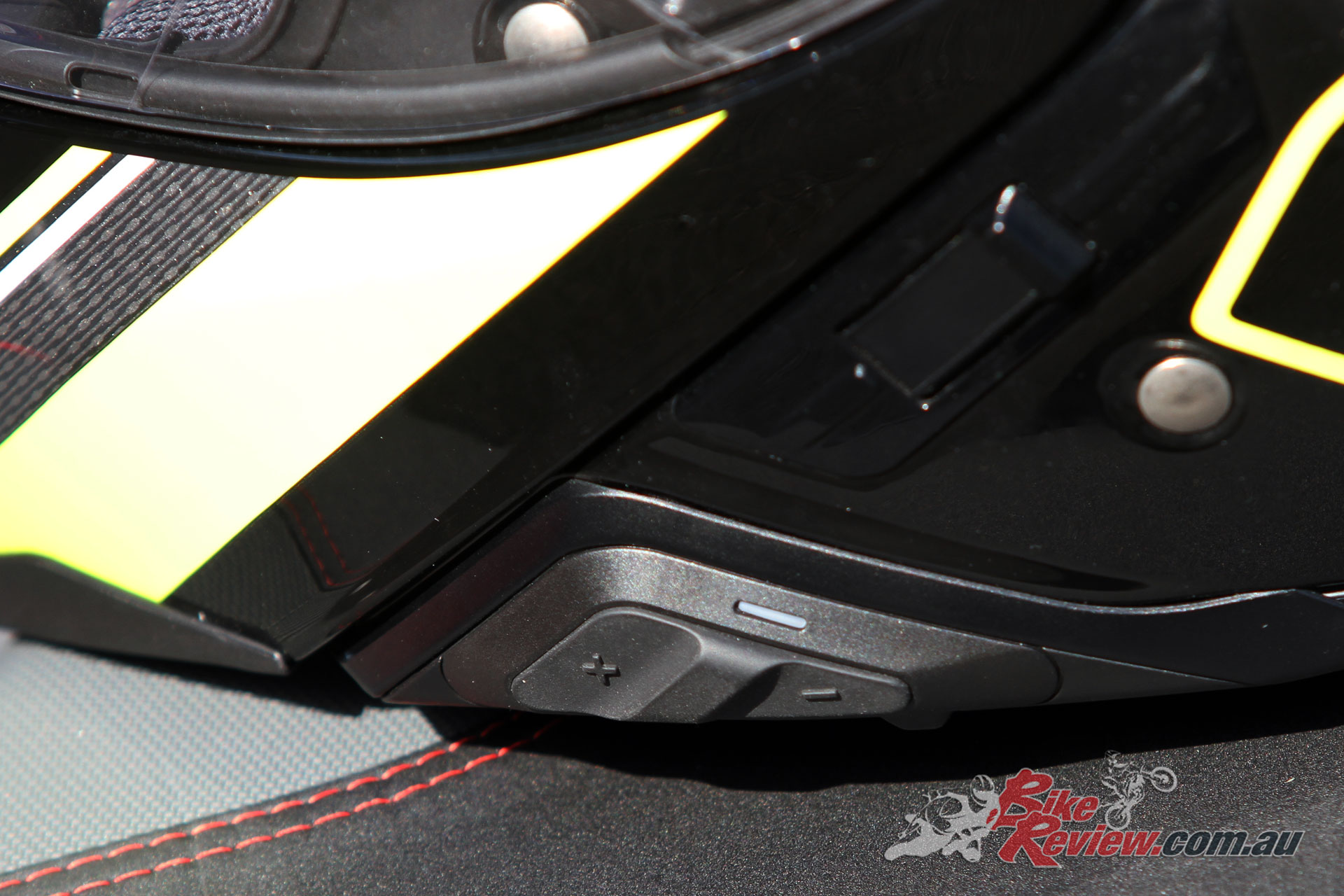 The Sena Prism can also be activated by the Sena SRL control if it’s turned on (using the central button). The SRL will also inform you when recording starts and ends, and low battery.

Video quality is actually really good as well, not quite at the GoPro level, but still offering good quality at FHD (1920 x 1080), with clear footage, good low light performance, and good clarity/detail. You don’t get quite the variety of shooting modes like 4k or higher FPS unless you drop quality to 720 for 60 FPS, but the trade-off is of course the audio syncing. There’s also a variety of other settings that can be set up for time-lapse or photo modes, and being tripod mountable means there’s good versatility for using the camera creatively. 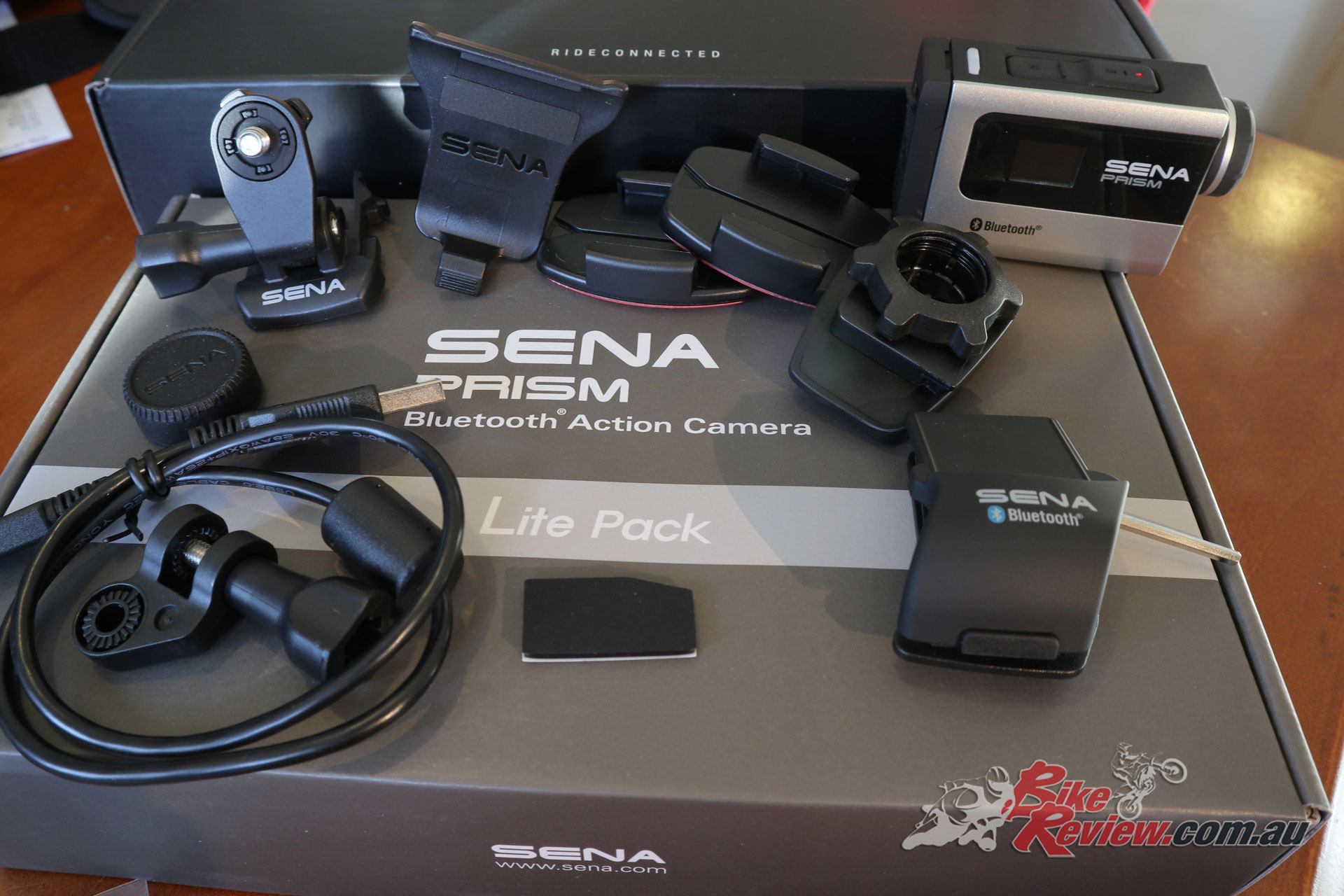 A variety of mounting options make for versatile fitment choices, although the ‘Whole Kit & Kaboodle” version features significantly more mounts for around $70 more.

Battery life is also impressive, normally recording up to two hours of FHD footage, while synced with the Sena SRL, and there’s a removable battery, so you can swap these out and get a lot more footage on a single trip, especially if you’ve got extra cards. Four gigabyte of card space is also around the 45 minute region, so it’s quite efficient as far as storage and optimisation. Our higher quality GoPro Hero5 Session records 4gig per 15 minutes for comparison. 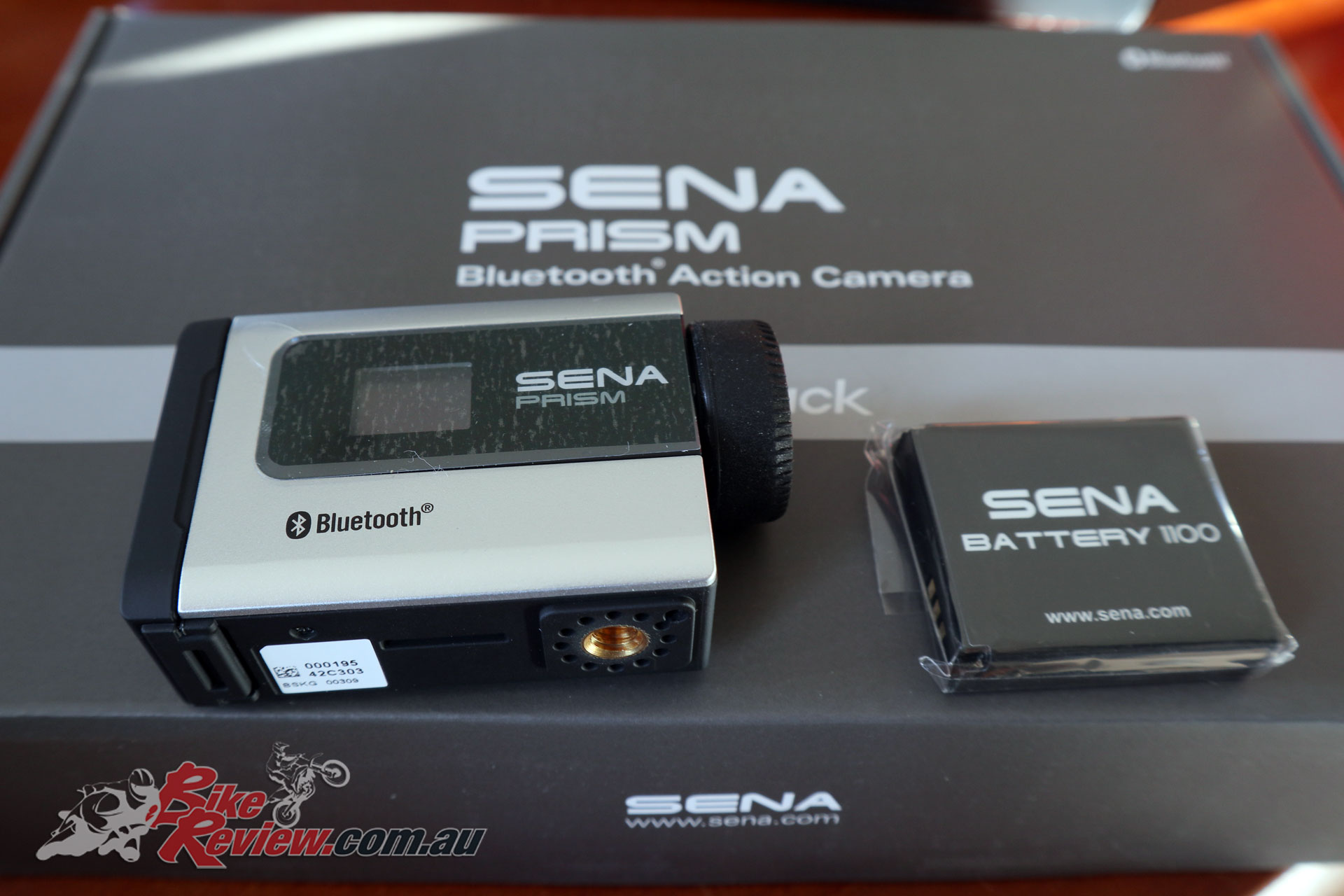 A removable battery makes long days of recording possible, while the standard camera mounting thread is a great feature

Recording starting and stopping is also announced via the Sena SRL comms system in the Shoei Neotec II, which is another nice feature, as is low battery, with the Sena SRL offering plenty of battery life itself.

The Sena Prism action camera in the Lite package is available for $299.99 at a slight discount at the moment, so you’ll probably be able to find something higher spec for a similar price is only video is a concern. However if you’re wanting to sync to your Sena communication system this camera is a great option, and it should also sync with other generic Bluetooth comms systems as well. 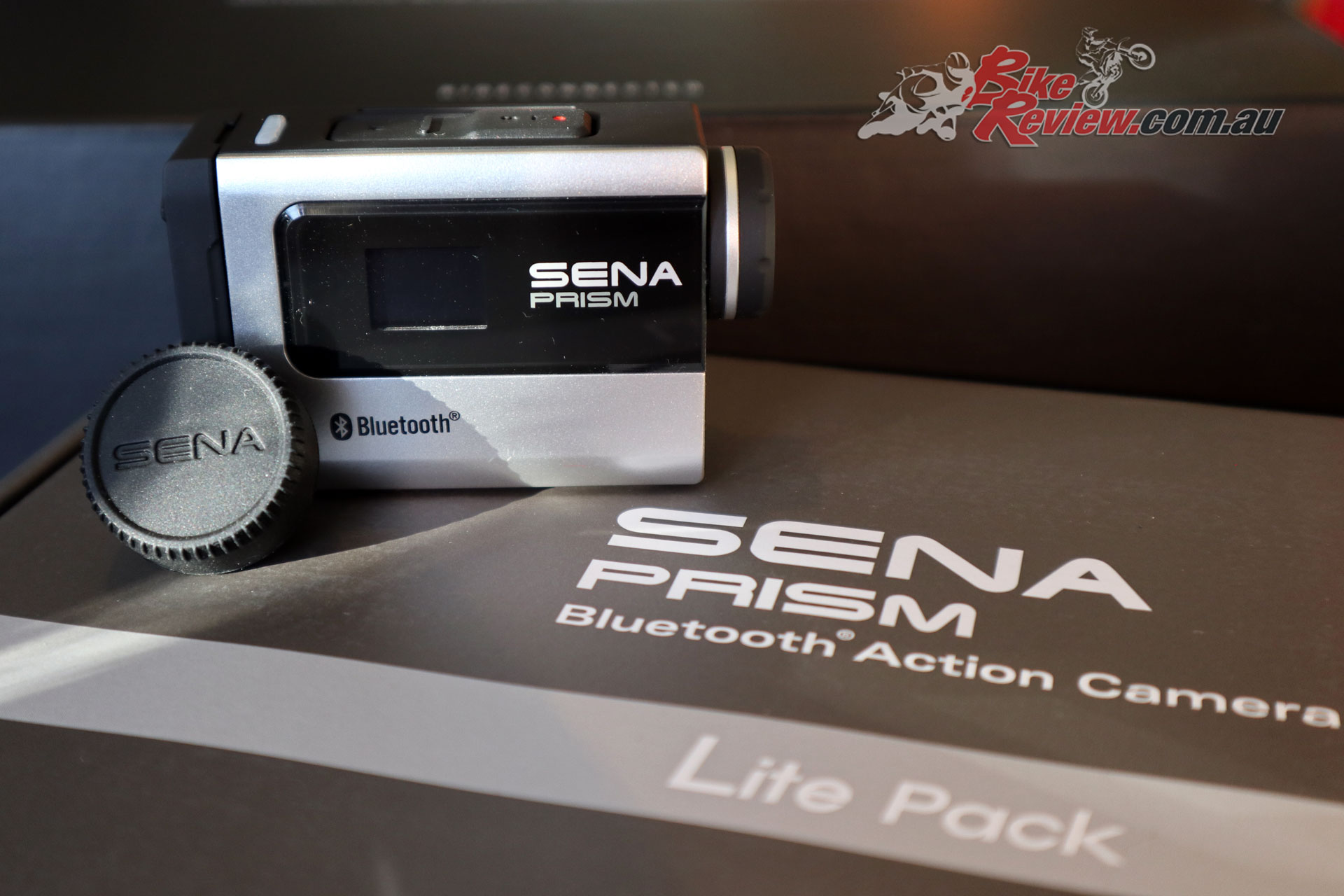 The Sena Prism Action Camera is obviously a bit of a niche choice, but in that niche is absolutely excels and offers great value

Overall I’m highly impressed with the overall setup, and the Sena Prism makes a great addition to my Shoei Neotec II modular helmet, and the Sena SRL communication system. Obviously this is somewhat of a niche use, but if this is what you’re after then it may well be a great option for you! 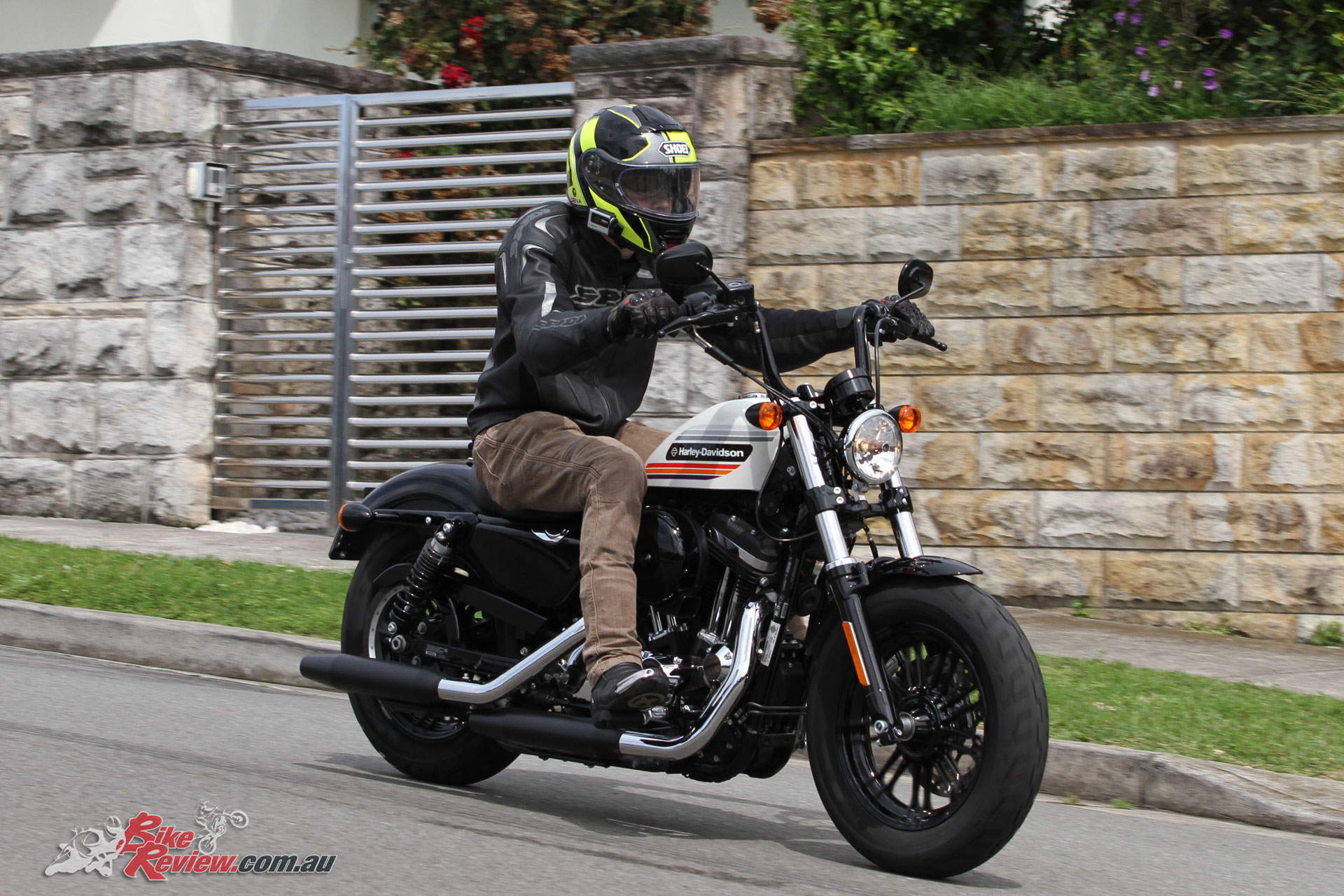 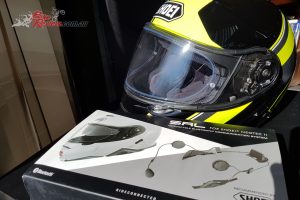 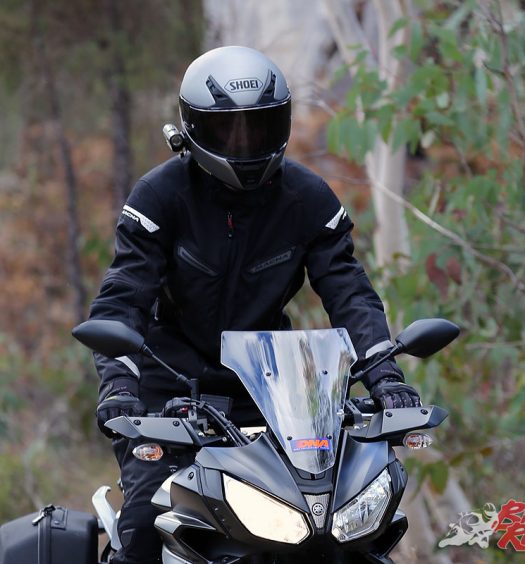 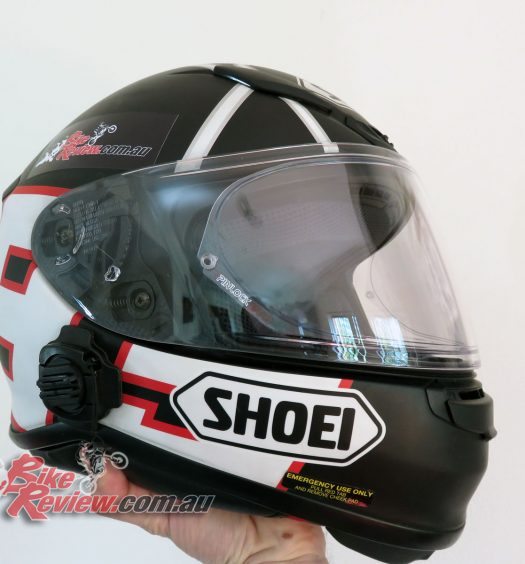