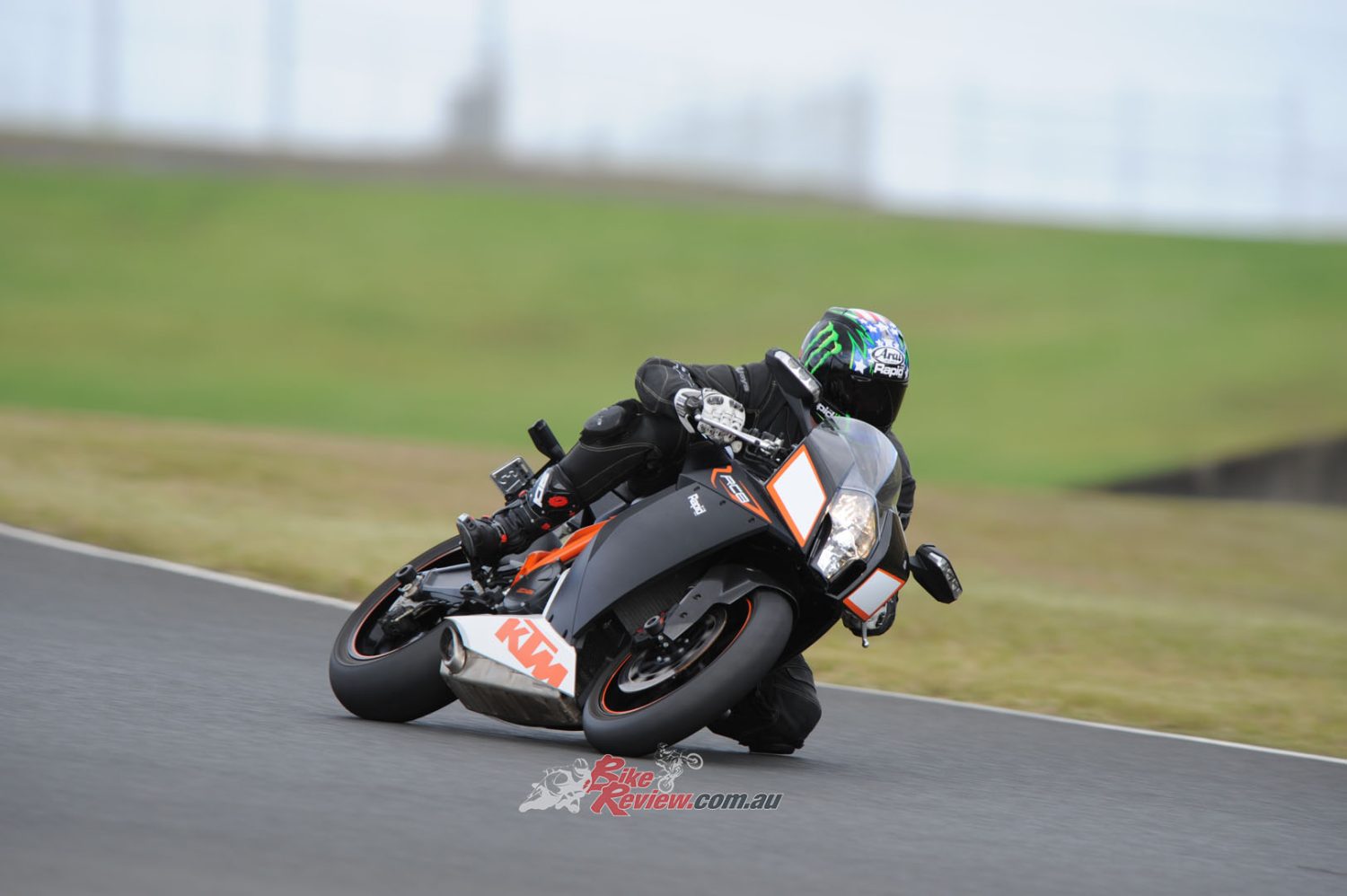 Throwback Thursday: 2009 KTM RC8R, Changing A Lemon Into An Orange

Back in 2008 KTM released the RC8 to the disappointed world’s motorcycle media. A year later the bike was fixed. Here’s a look back at the short-lived RC8R… Photos: Keith Muir

As we celebrate Remy Gardner winning the Moto2 Championship on a KTM and now riding MotoGP for the brand, along with Jack Miller signing for two-years, over a decade on and Jeff reflects on how KTM turned a lemon into an orange in just 12 months with the RC8R. 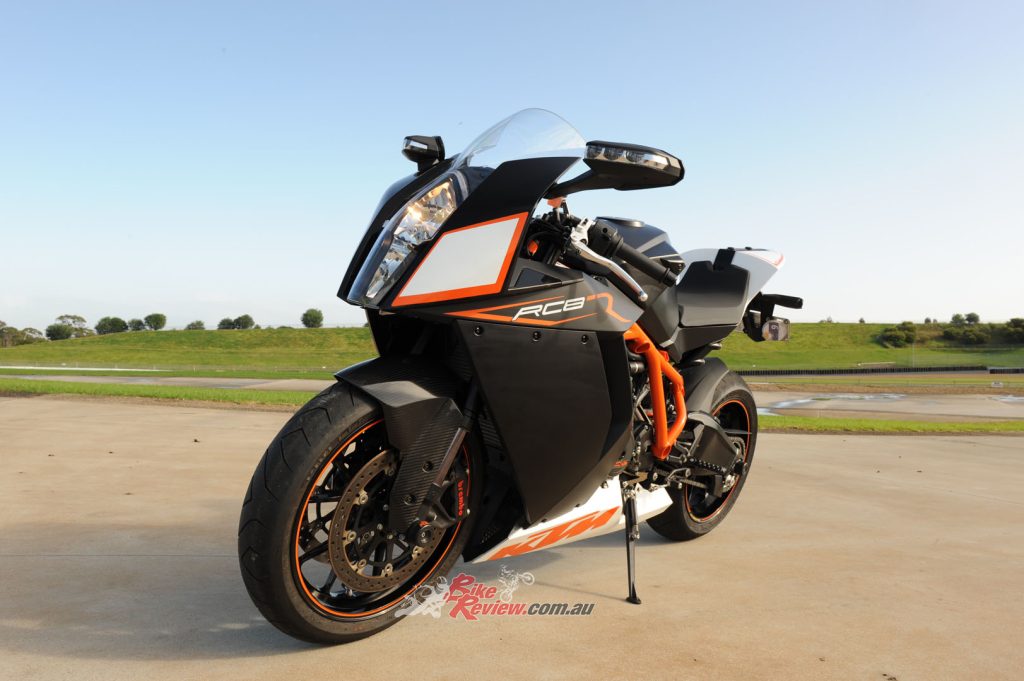 The RC8 was far from “well received” when it landed back in 2008. There were so many critical errors made on KTM’s part that it got a full redux in 2009, enter the RC8R…

To say that the 2008 KTM RC8 was a flop is an understatement. I still remember riding it at the official Australian launch, a few months after we had attended the World Launch in Portugal, and as I lapped Eastern Creek, I just could not believe how badly the bike handled. Thankfully, the engine stopped, and I didn’t have to keep riding the bike. It was a massive shock and needless to say, the bike got beaten in all of our Sportsbike Shootouts that year, even by the Buell 1125CR…

Check out our other Throwback Thursdays here…

Fast forward to 2009 and some subtle but well learned changes were made to the up-spec new KTM RC8R and wow, did KTM come back with a vengeance… It was fantastic! Chalk and cheese… and definitely destined to be a good bike to collect if you can find one out there… 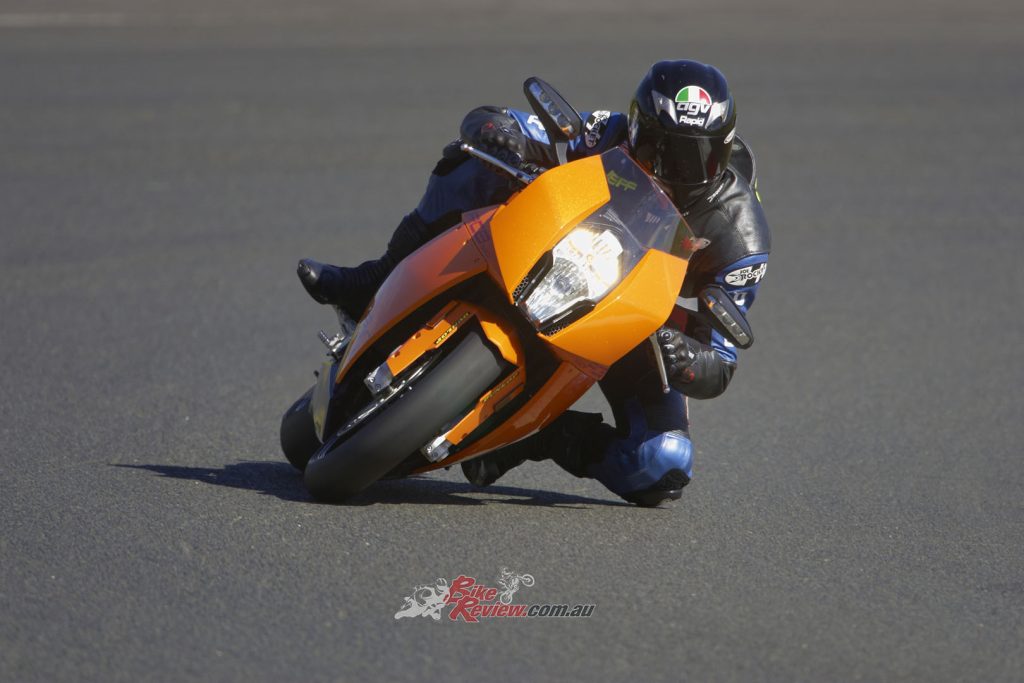 KTM’s first ever road bike was criticised by much of the world’s media for lacking top end power, suffering gearbox issues and many handling problems.

From the outset, KTM declared the first RC8 a road-based machine, designed to be a good comfy torquey sportsbike on the street. Unfortunately for KTM, the bike was not quite ready and 2008 was a disaster for the Austrian manufacturer. Their first ever road bike was criticised by much of the world’s media for lacking top end power, suffering gearbox issues and many handling problems. It was a hard time and must have been tough on company moral. So, to stick to their plans of a follow up race version and come back as strong as they did with the RC8R, was an outstanding achievement. 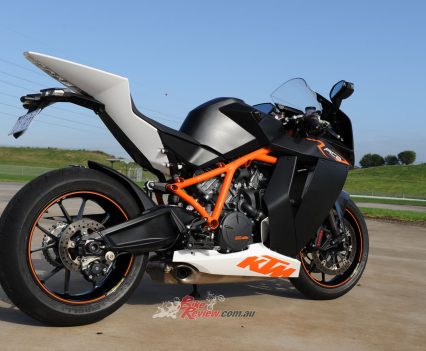 At the time, KTM were the must-have brand if you were into motocross. 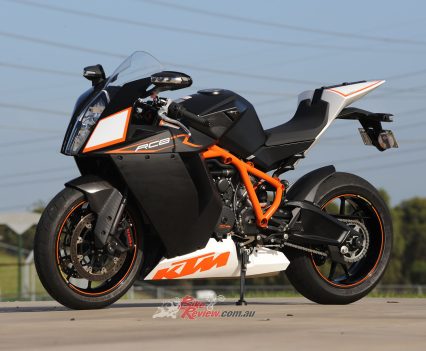 So the bar for their dive into the superbike category was set super high.

The RC8R was not your run of the mill R version – too many manufacturers stick some nice suspension and wheels in and slap a few stickers on to gain that R status. This bike was designed purely for the track day rider, serious sportsbike owner or racer. It’s all performance and high-end kit but cost over thirty grand! 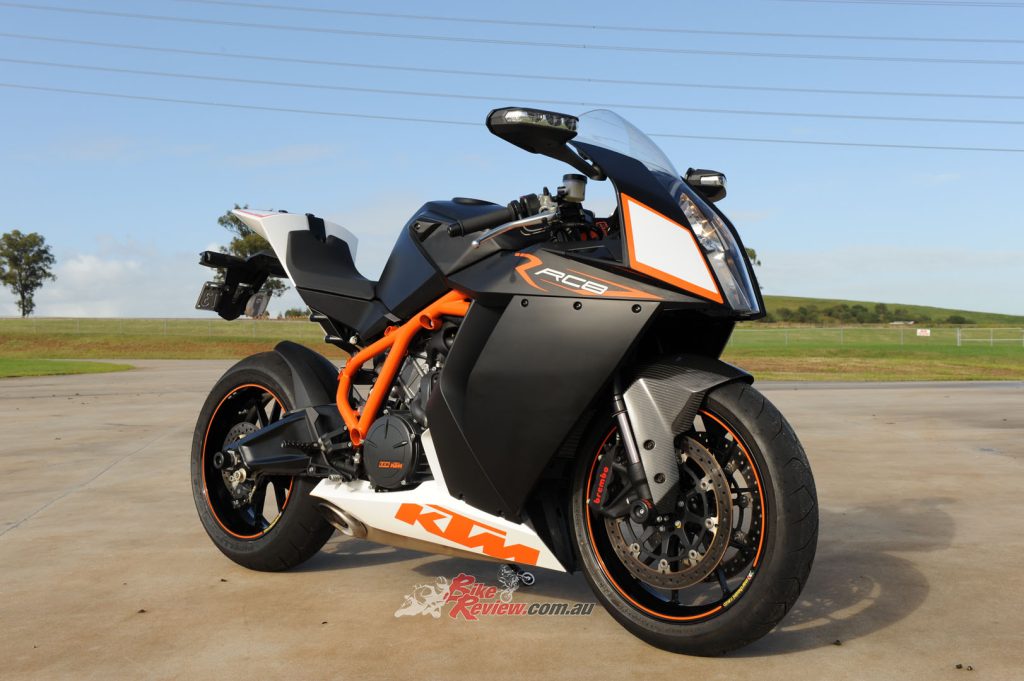 The KTM RC8R wasn’t just a bike with a few new stickers and a premium price tag over the standard model. It had some serious equipment on it… 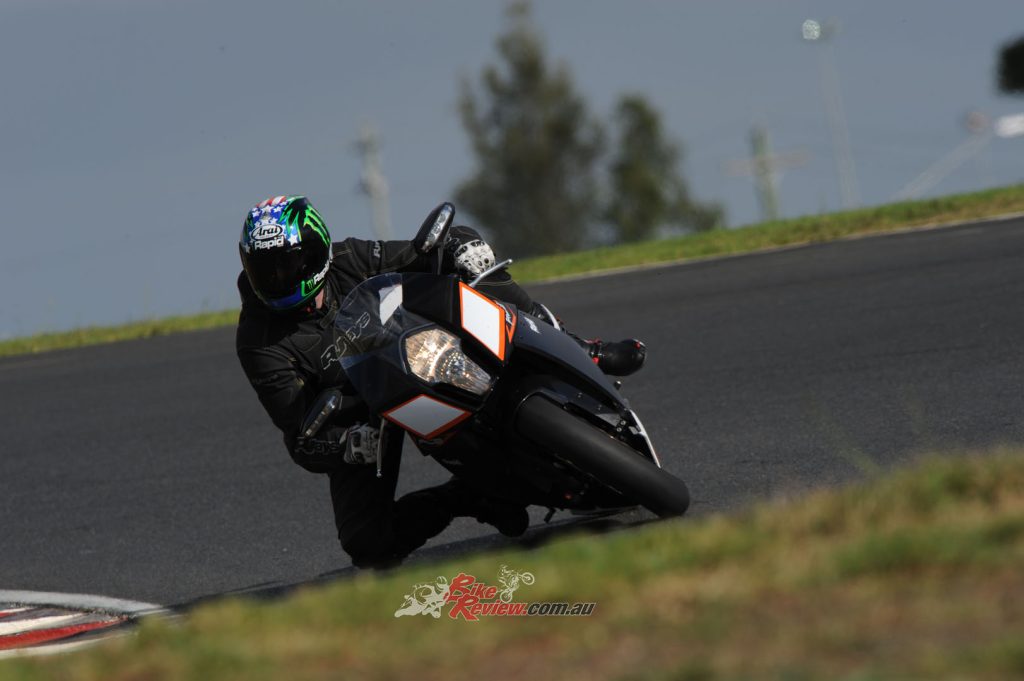 SMSP was the perfect testing ground for the revised KTM. Long sweeping turns with plenty of heavy braking.

My first outing on the RC8R was at the former (now SMSP) Eastern Creek Raceway in Sydney. The bike was delivered to me by KTM Australia for an exclusive test and set to the recommended track settings – five out for rebound and comp and three out for preload on the forks, 10 clicks out for rear comp, one turn for rear high-speed comp, five clicks for rebound and 8mm of spring preload. 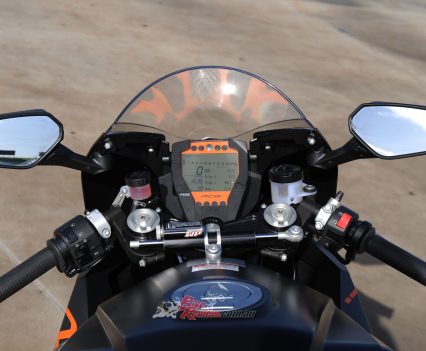 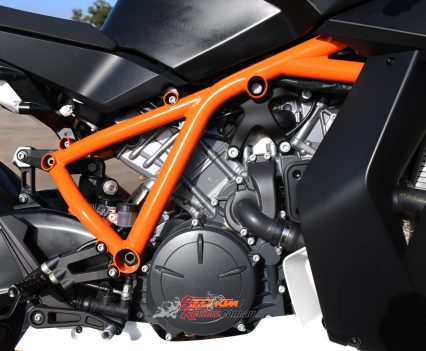 KTM upped the bore size for the RC8R.

This equates to approximately 50 per cent firmer on the front and 25 per cent firmer on the rear compared to street settings and worked well with no further changes required at the track on the day.  The bike also had a brand-new set of Pirelli Diablo Supercorsa SP tyres – the rear being a 190/55 section, which is standard fitment. Gearing was also standard.

“The 2009 KTM RC8R looked fast standing still, no doubt about that, but out on the track was the real surprise. “

After a few laps to scrub the tyres I got stuck into it. Being 185cm and 90kg meant I was often cramped on the current crop of superbikes. Not so on the RC8R. There was so much room around the bars and tank, plenty of legroom and knee room, it was easy for me to tuck behind the screen and the bike feels very natural. This is important to me – I’m one of those riders that needs loose leathers and lots of movement to feel confident and limp on a bike to get up to pace. That was instant on the RC8R… 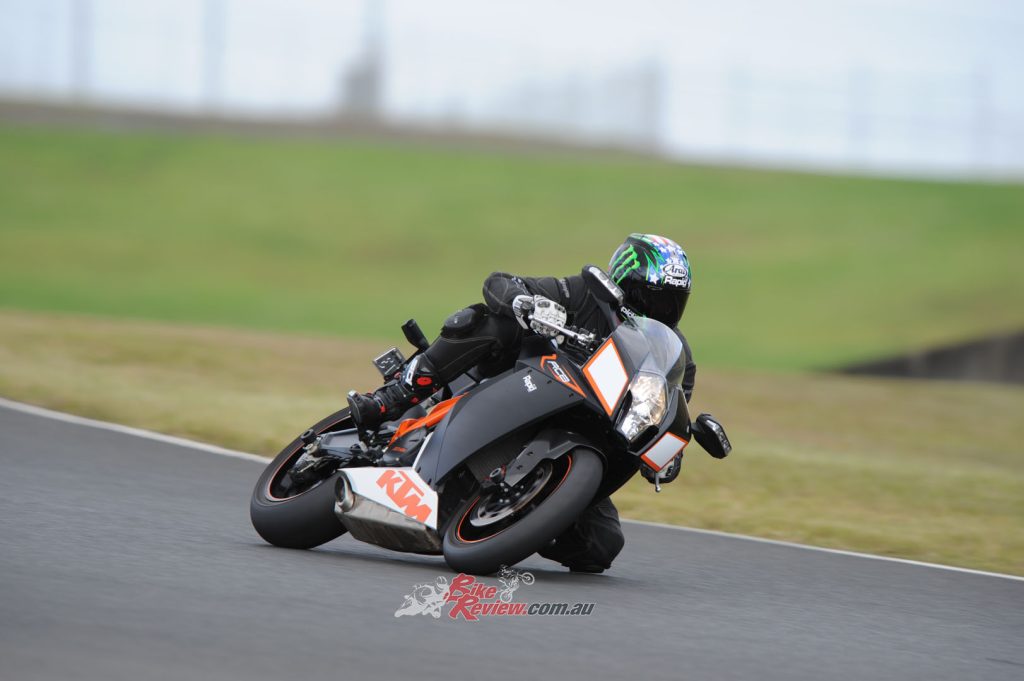 Jeff mentioned that the second he hopped on the RC8R, he felt at home and comfortable to give 100% on the track.

The standout was the power increase. The bike pulled from 4000rpm but really hauled from 6500rpm to just over 10,000rpm where the limiter kicked in. The mid-range felt stronger than a Ducati and the top end much closer than it was. As a result, top speed on the long chute at Eastern Creek was up and the bike was much more raceable.

The gearbox action was smooth and precise, and I had no missed gears whatsoever. The clutch action was light and very controllable. I’m old fashioned and use a lot of clutch slip into turns. Combine this with the improved ECU control of the rear cylinder butterfly on closed throttle (the ECU opens the rear throttle valve slightly on corner run in to de-vacuum and reduce engine braking – called Engine Braking Moment Compensation), which is extremely effective, and the RC8R was one of the best behaved superbikes into turns I had experienced. 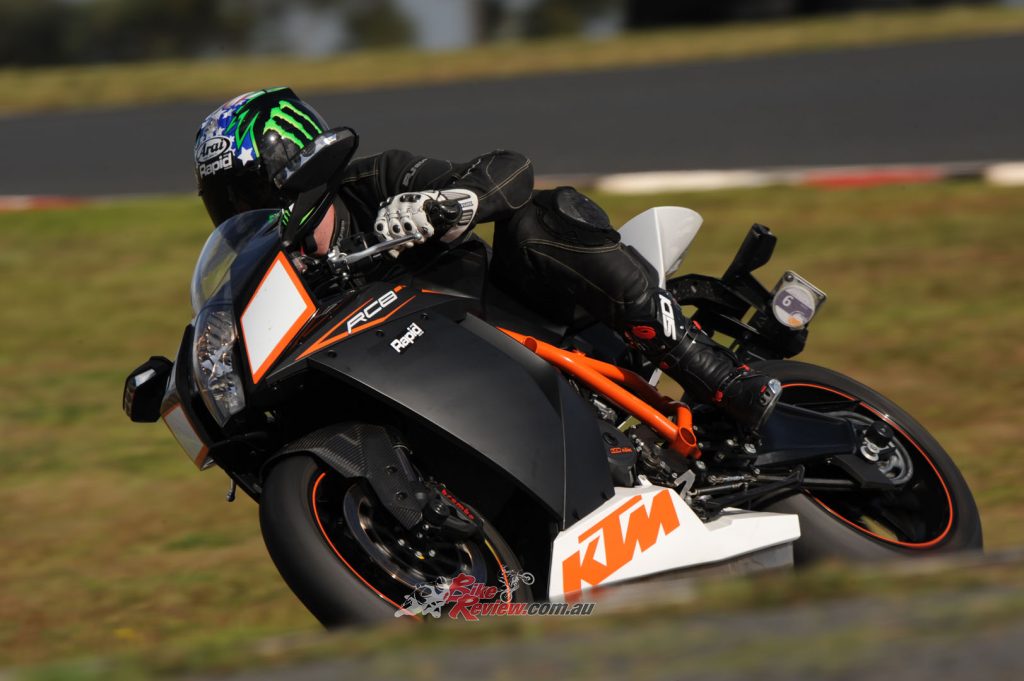 Initial turn-in was sharp, in fact, the RC8R was more nimble than the opposition despite the stability of the increase in trail. Turn-in on the brakes was great. The Brembo package offered good feel and reaction to small inputs to give good control. Front tyre feel was improved in this situation over the RC8, however, I still didn’t feel 100 per cent comfortable there.

“The RC8R was one of the best behaved superbikes into turns I had experienced.”

The bike tipped in with grace and control but needed slightly more lean angle than other superbikes to carry the same speed through a turn, or to effectively execute a turn without running wide. It was when on this extreme lean angle that I wanted more front feel. The increase in trail, however, did give me some reassurance that there is a bit more tyre on the track than on the RC8. Ground clearance was not an issue and the bike was very settled and comfortable on its side. 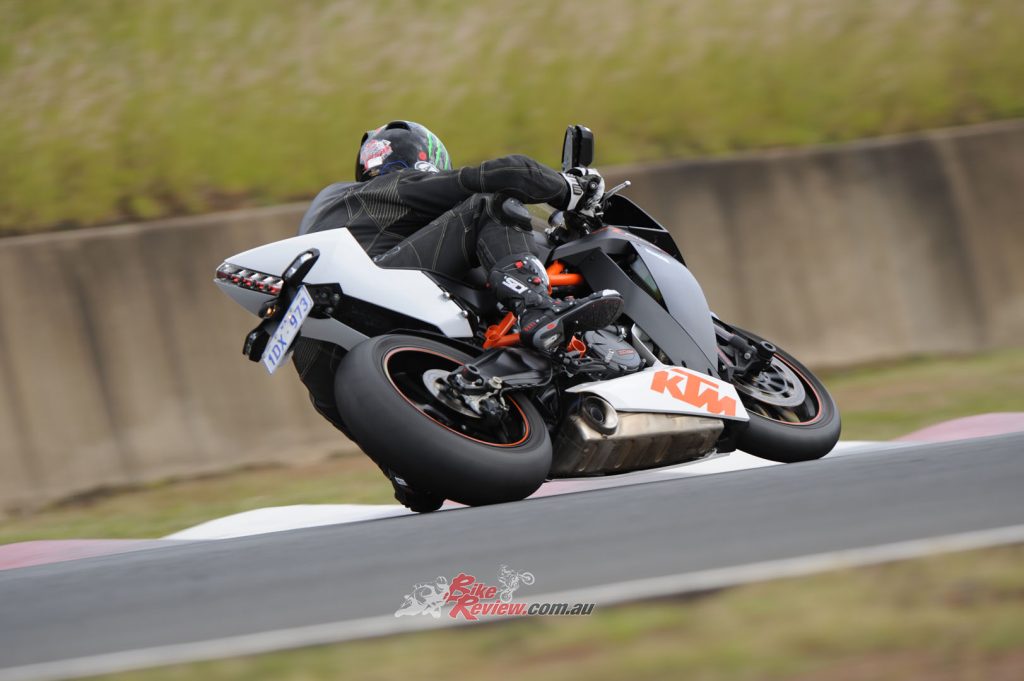 After testing thousands of bikes it takes a seriously special machine to stand out as much as the RC8R did.

Off turns the RC8R was a missile. It loved big sweeping classic lines and with a clear track ahead I found I could really wind the KTM up. I experienced no initial throttle snatch on opening mid turn, although I did read other reports in 2009 stating some issues, this particular press machine was fuelling well on the track.

“Off turns the RC8R was a missile. It loved big sweeping classic lines and with a clear track ahead I found I could really wind the KTM up.”

At wide-open throttle off corners the rear tyre hooked up well. I experienced no wheelspin or sliding on the bike while circulating in the 1:40 bracket. A slower time on the RC8 in 2008 had it spinning everywhere and backing in too. 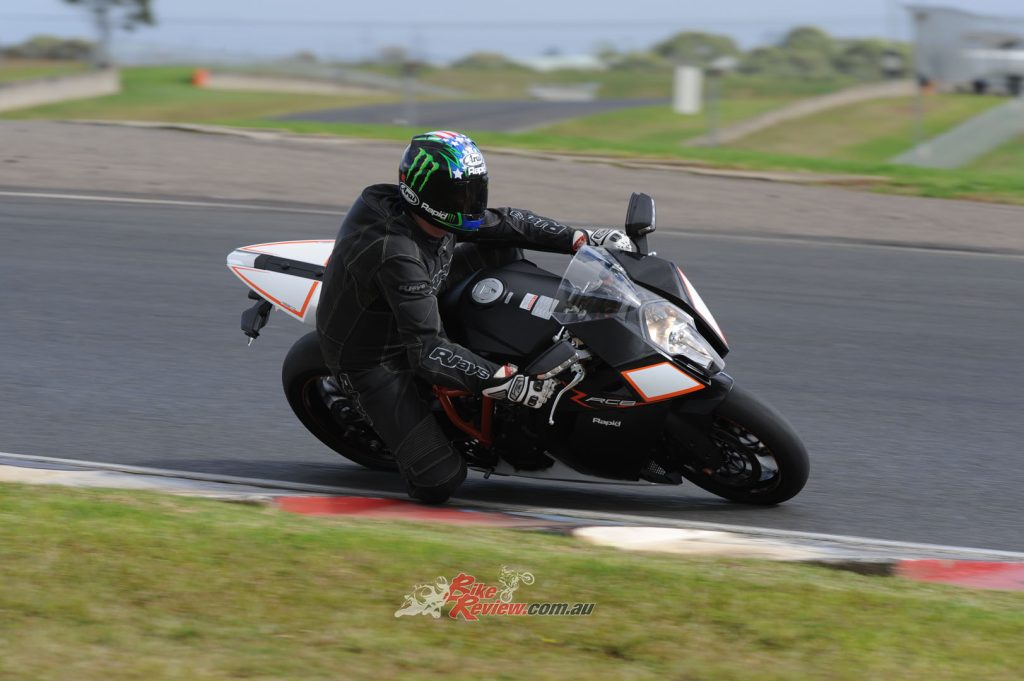 At wide-open throttle off corners the rear tyre hooked up well. I experienced no wheelspin or sliding on the bike while circulating in the 1:40 bracket.

The RC8R was one of the most stable and competent brakers on the market. From flat in fifth off turn one to first gear turn two, braking extremely hard, the bike did not even get the wheels out of line unless I was playing around with a bit of rear brake. As a track bike the KTM RC8R was a HUGE improvement over 2008 RC8 Lemon.

2009 KTM RC8R Tech Talk
The dry sump power plant consisted of two 75-degree V cylinders, with a bore and stroke of 105 x 69mm, 2mm up in bore size on the RC8. The upgraded four-valve heads had a more compact combustion chamber but the same 42mm in and 34mm EX titanium valves and finger followers. The revised camshafts gave greater duration with unchanged lift and had adjustable sprockets as standard. 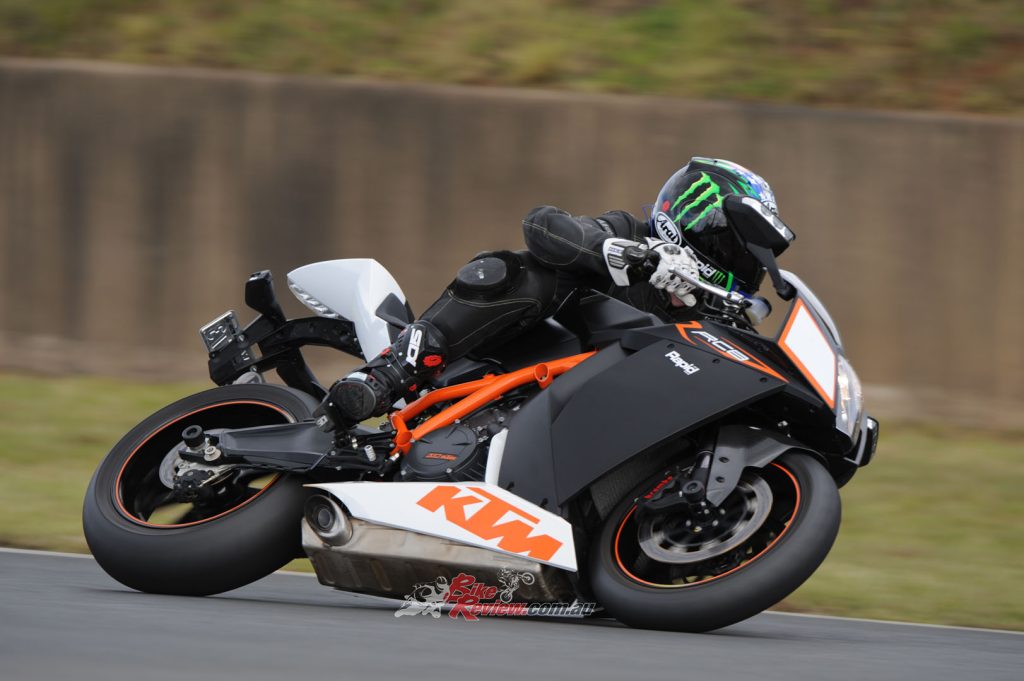 KTM did a superb job designing the engine for the RC8R. Plenty of power all the way up through the rev range.

The waterpump was been redesigned to improve flow to a larger radiator, and power was up 15-horsepower 250rpm higher in the rpm range, with torque upped by a few ft-lbs also. Compression was up 1 full point to 13.5:1 and the 52mm throttle-bodies from the RC8 were retained. The much talked about gearbox of the RC8 was been refined and a reshaped gearshift star had improved shift. Due to the bigger forged pistons and revised forged conrods, the twin counterbalancers were revised and dampen vibes above 8000rpm.

Two throttle tubes were available for the RC8R – a round track version and oval road progressive version. There was no slipper clutch standard on the RC8R however the rear hop issue of the RC8 was addressed with the RC8R ECU opening the rear cylinder throttle butterfly on run-in, bleeding off vacuum, which made the bike fantastic into turns. 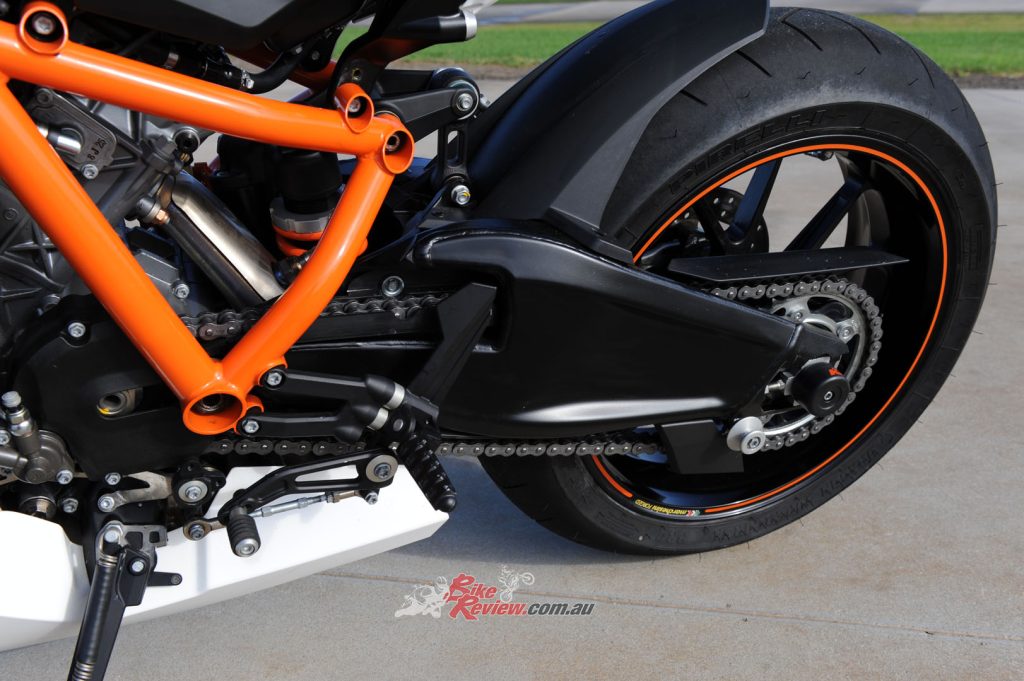 KTM employed a chromium-molybdenum trellis frame for the RC8R, which was powder coated. Along with this was a MotoGP inspired swingarm.

KTM employed a chromium-molybdenum trellis frame for the RC8R, which was powder coated. The frame weighed a mere 7.5kg in total, up to five kilos less than an alloy twin-spar type and had a rake of 23.3 degrees and trail of 97 millimeters, 5mm more than the RC8.

Front suspension consisted of fully adjustable 43mm up-side-down WP forks with TiN coating, which the RC8 did not have. The dual, 320mm fully floating front rotors were 0.5mm thicker than on the RC8R and were squeezed by Brembo radial mount four piston monoblock calipers. The front and rear wheels were forged alloy Marchesini units measuring 3.50 x 17in and 6.00 x 17in. Pirelli Diablo Supercorsa 120/70 – 17 and 190/55 – 17 tyres were fitted standard. 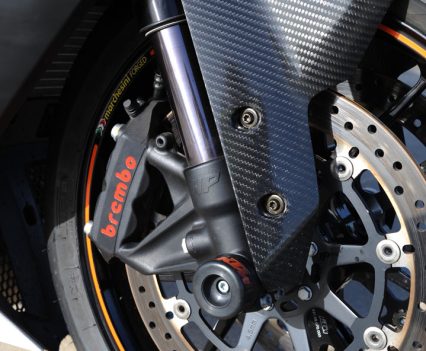 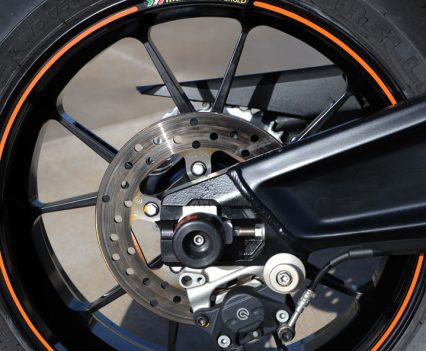 Rear brakes were sorted by Brembo too.

Rear suspension was an upgraded adjustable WP monoshock with different internals and a softer 95Nm/mm spring over the RC8 110Nm/mm spring. A ride height eccentric offered 12mm variation, 5mm more than the RC8R. The seat height/sub-frame was adjustable independently of the ride height.

The swingarm consisted of five parts. Three cast alloy and two sections of layered sheet metal, which was anodised. The team drew on their experience in MotoGP with Team KR and the end result was a swingarm closely linked to the one used in grand prix. The bars and levers are also adjustable. 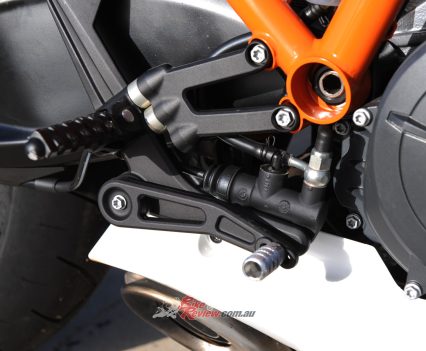 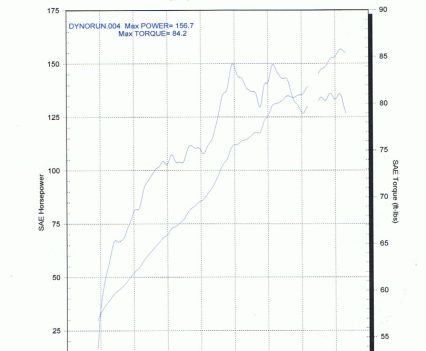 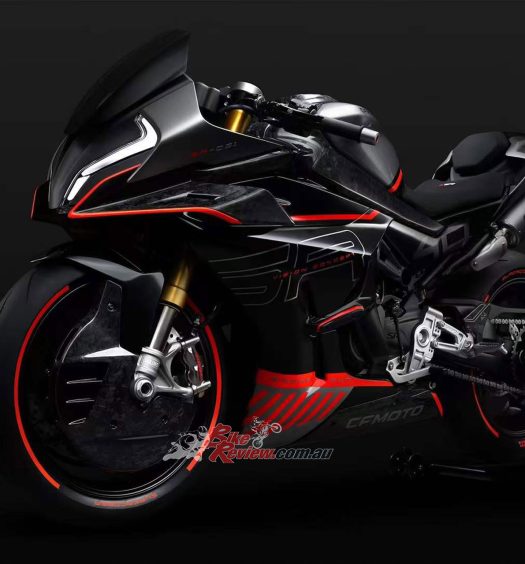 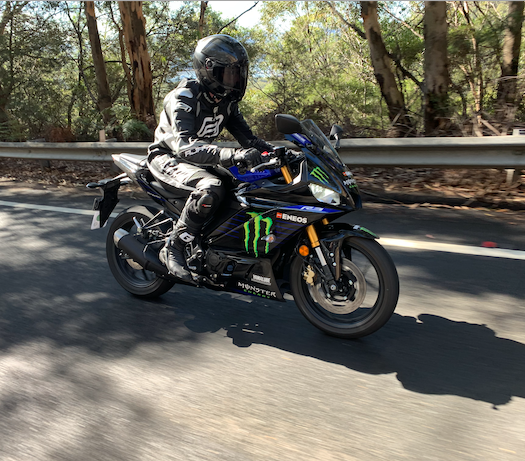