Norton. Is there any cooler name in motorcycle history? Five years ago we tested the Commando 961, a bike with possibly the worst engine ever fitted to a sweet chassis! The rest is history, sadly... Words: Jeff Ware Photography: HMC Photography

Back in 2015 I tested the then new and much anticipated Norton Commando 961 Cafe Racer. The bike turned out to be a sweet handling, great looking machine with a totally junk motor. Sadly, the overpriced rattler has ended up in the news in recent years for all the wrong reasons… It’s a shame and a what could have been. You have to feel for the customers that never got their bikes – or money. Anyway, today we step back and check out the 961…

I’ve just stepped off the 1299 Panigale at Fraser Motorcycles. I’ve been riding the latest superbike from Italy for a week and have completely lost my mind over the amazing power and handling. 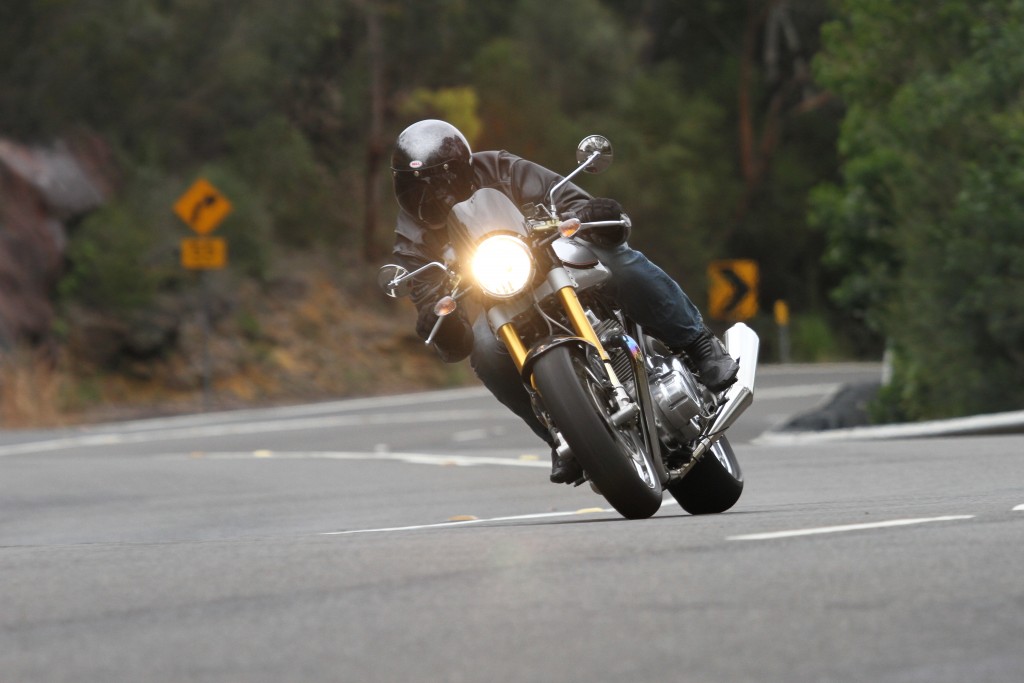 Five minutes after doing the hand back of the 1299 to multiple Australian Pro Twins Champion, Craig McMartin, he’s handing me the keys to my next press test machine. The Norton Commando 961 Cafe Racer. Polar opposites.

I swap racing leathers for my RJays Scorpion retro jacket and Bullit retro jeans not to mention the Bell open face. Happy Days. I feel like The Fonz… It doesn’t take that long to get the rundown on the bike. No wild electronics here. There’s a speedo, tacho, trip meter and a clock. Nothing else to remember!

I walk around the bike in admiration. The build quality is good – deep silver paint, rich chrome, lots of polished alloy and stainless-steel mufflers. I do notice casting marks on the primary cover that have not been polished out, which is disappointing, but aside from that the finish is high quality.

The bike is an odd mix of old and new. The engine looks very similar to the original Commando twin aside from the obvious, being the much larger cylinders. The waistline of the fuel tank is stunningly slender and the ‘bars low and narrow. 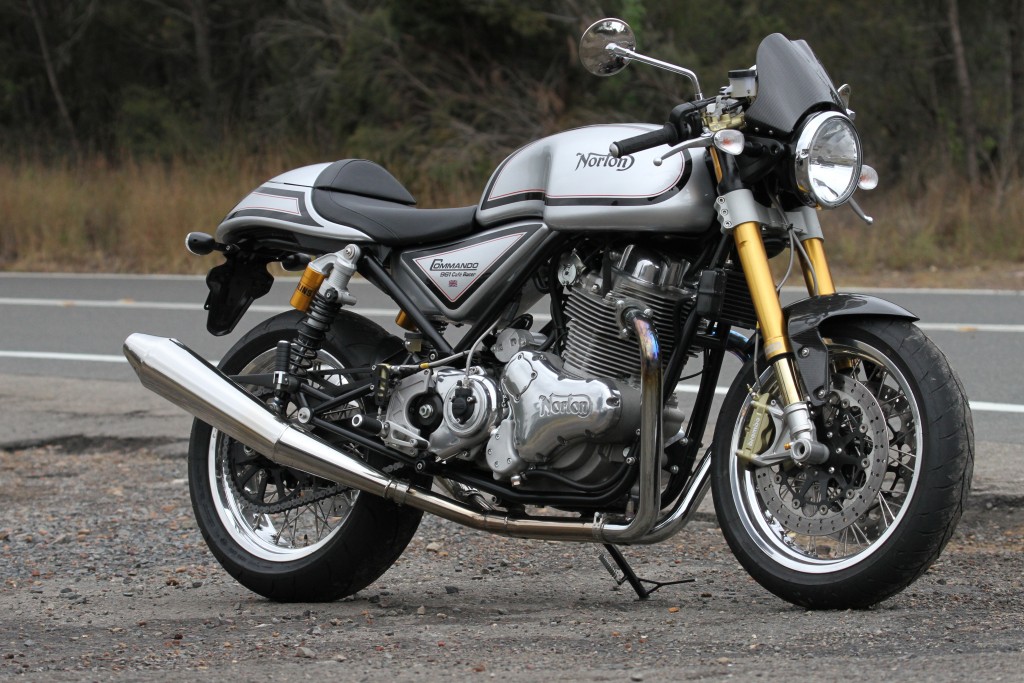 The Norton Commando Cafe Racer features iconic styling, with high quality paint and attention to detail, for a modern version that hasn’t strayed far from the original concept.

The tank is very long and the seat flat with the caf-racer hump. Modern Ohlins forks, Brembo radial-mount calipers and wide wheels and fat hoops support these classic styling traits. The balance is just right…

I sit on the bike for the first time. The reach to the ‘bars is a loooong way. Further than on any bike I’ve ridden. The fuel tank is slim between the knees but unfortunately the knee indents are too far back and my knees are sticking out like sails in the breeze. I’m 187cm.

I fire up the big parallel twin and it settles into a low rumble, clunking and clattering and sounding like it’s full of nuts and bolts. I like the character but want more exhaust sound. The mufflers are the big let down here – no note to speak of and completely strangling what could be a glorious sound. I’d be throwing them out ASAP and be putting open pipes on this stunner if I owned it.

I pull the hydraulically actuated clutch in and select first gear. Clunk! Off I head up the M4 Expressway.

The 961 is not a commuter bike – and I would assume would rarely be ridden in peak hour traffic. It rumbles, farts, rattles, clunks and is incredibly uncomfortable – we will leave it there as really, it’s pointless commenting here as the bike is out of water completely… It sucks. 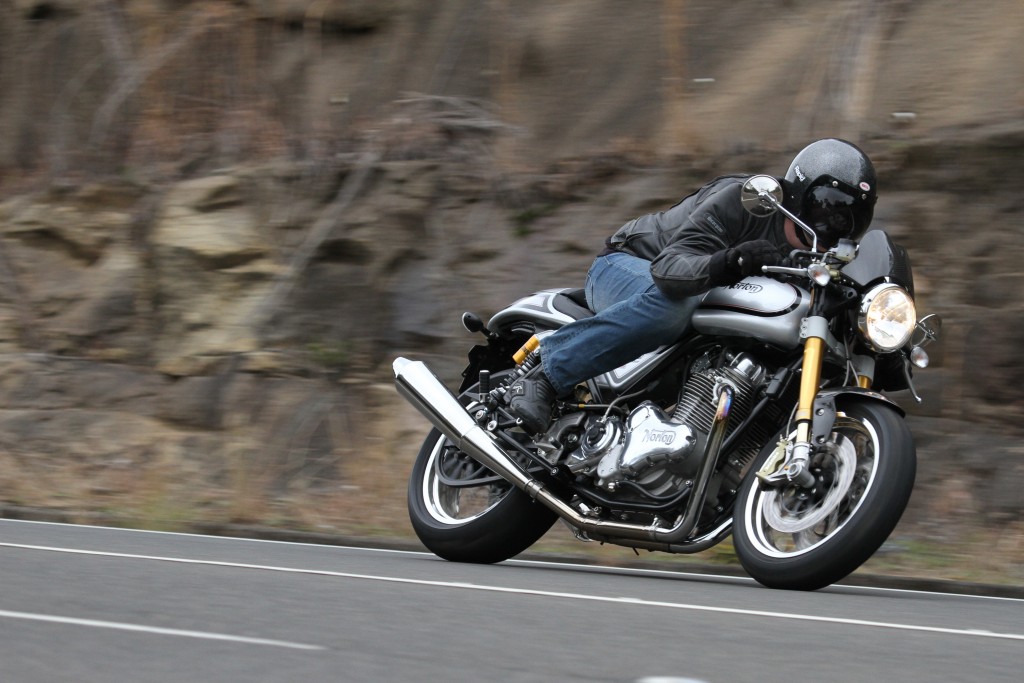 Reach to the ‘bars is long, with heavy city traffic not an area you’d wish to be spending much time on the Commando. Out on the open road and through the twisties however the Commando is a whole different beast.

So back to my twisties. The same corners I rode the 1299 through just hours earlier, with 182rwhp, are just as enjoyable on the much less powerful Norton. Just like the Moto-Guzzi V7 Stone is one of the best fun machines in the smooth 80-zones of my local roads, the Commando too promotes good times at sane speeds that don’t land you in the lock-up. The engine is old school and I’ve accepted that. I’ve found the sweet spot of 3500 to 5500rpm and there is no point revving outside that range unless you want to do an imitation of a mechanical paint tin mixer! It really is pretty poor though…

The gearbox action as expected of a primary gearbox – that is a long, slow shift and if I try to rush the shift or shift at the same speed as I would with a conventional ‘box, the gears won’t engage and there is a false neutral between every gear. The engine doesn’t like the throttle snapped open, either, so everything you do has to be done with finesse and patience on the 961 – think wet weather riding.

The ride position begins to make sense and the bike actually handles really well on smooth tarmac. There is a lot of weight there – no official numbers are available and I’ve read some claiming 183kg dry, others claiming 205 dry, but my estimate is closer to the 240kg range.

That said, the steering is quick and accurate, the bike tracks well, the brakes are sensational and although my test bike was very soft, the Ohlins suspension could doubtless be dialled in very nicely.

On the bumpy roads there is a lack of spring control on standard settings, making the 961 unstable particularly at the back. All in the set-up, though, and there is no questioning the quality of the suspension. The 961 is fitted with Dunlop Qualifier tyres – I was surprised not to see Avon’s on the bike, given its country of origin. The Avon 3D Ultra Sport would work well. The Dunlops are not so good. 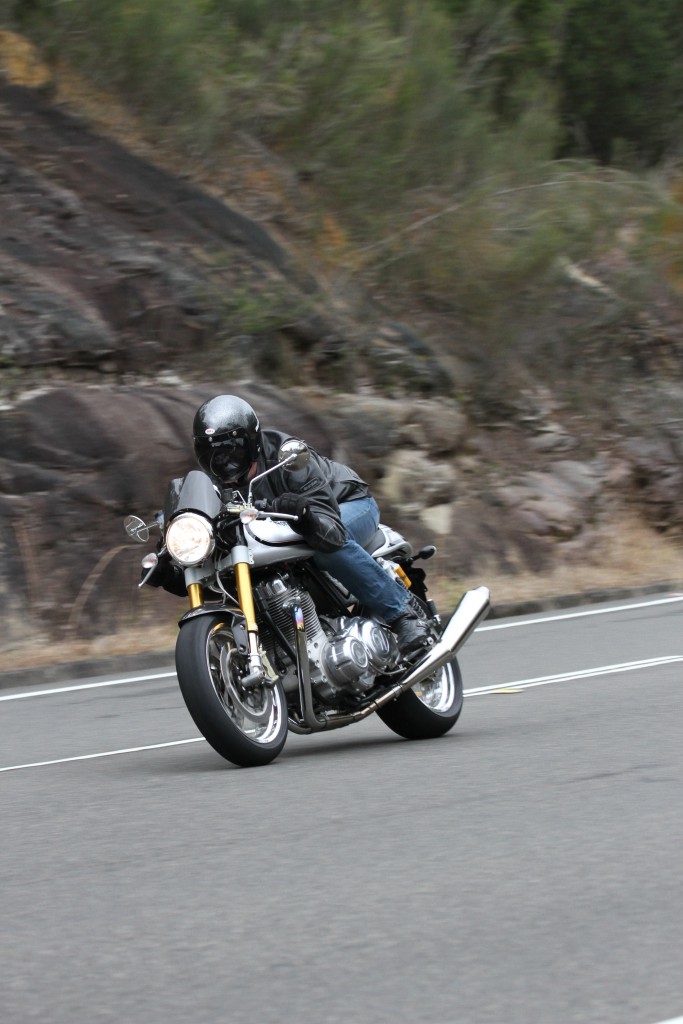 The Commando does need to be ridden keeping in mind that the engine is an older design, with the gearbox rewarding patience and planning, with the sweet point between 3500 and 5500rpm.

Few bikes have caused as much of a stir as the new Norton Commando among the middle aged motorcyclists of this world. Those lucky enough to have enjoyed the heyday of British motorcycle domination when names like Triumph, Norton, Velocette, Vincent, HRD, BSA, Royal Enfield, Brough Superior, AJS, Ariel, Matchless, CCM and dozens more ruled the TT and streets most likely drooled over the first Norton Commando 750 in 1967 or subsequent models through to the 850.

Even with the fact that the engine design was already over 20-years old in 1968, having being pencilled by Bert Hopwood in the 1940s for the 7 Twin, the Commando was a great success. It was sporty, nimble and at 190kg, lightweight. Despite being one of the most unreliable and self destructing bikes in history the old Commando also gained a cult following and was a pretty damn cool bike and nothing has changed…

Fast-forward to 2010 and Norton Motorcycles UK shipped the very first example of the new Norton Commando from its factory in Donnington, UK. Oh how things would change though… 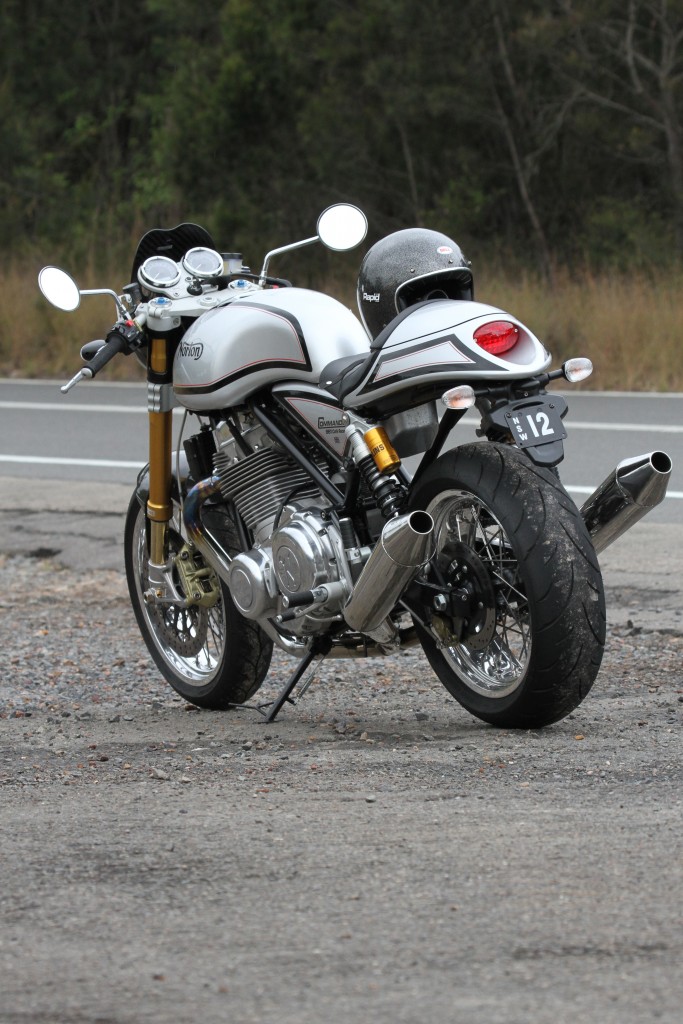 The exhausts are stylish but very quiet and will probably be the first item replaced for most purchasers.

Five-years later, after a long wait, Norton’s were finally Down Under, with NFI becoming the Australian importer and distributor of all three models, the Cafe Racer, SF and Sport, at the time.

The Norton Commando 961 is primarily a work of art and you would not be judged if you never even rode the bike – rather parked it on show in the bar or lounge room in a glass case. If you ride the bike, it will make you smile, particularly if you are from the original Commando era. 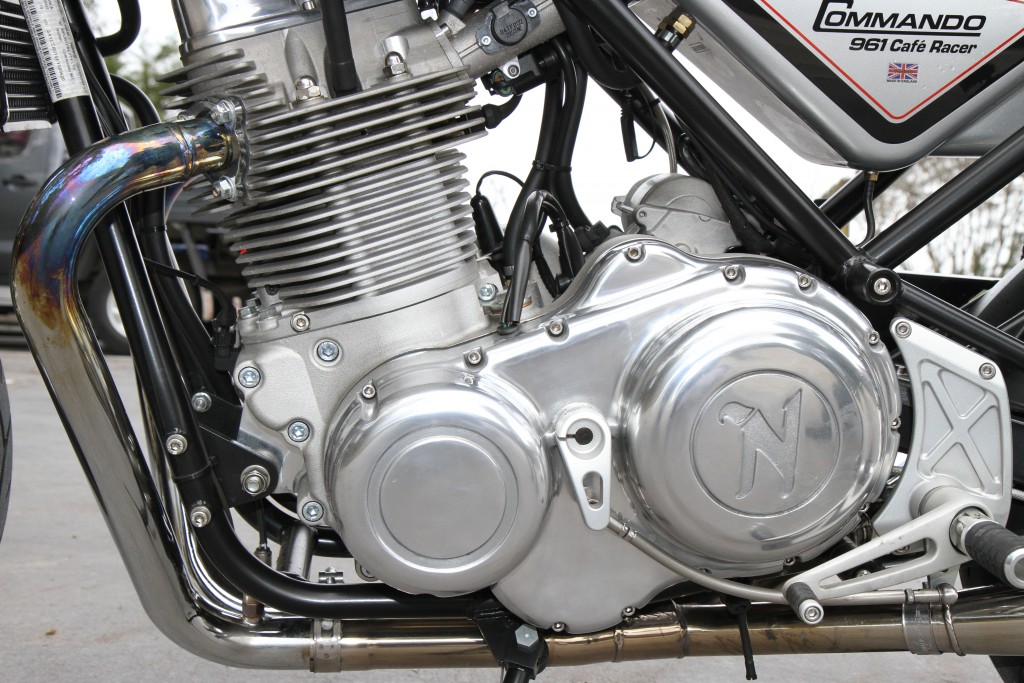 Horsepower is a claimed 80hp…

Fun for the collector… 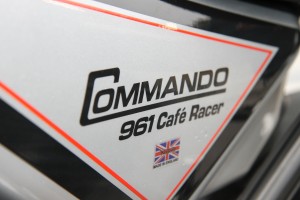 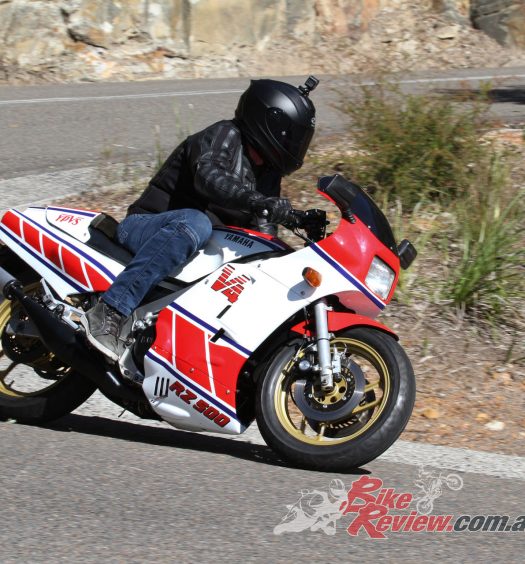 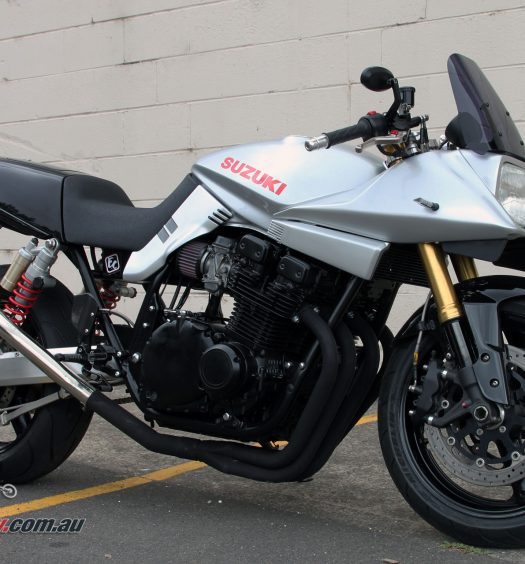