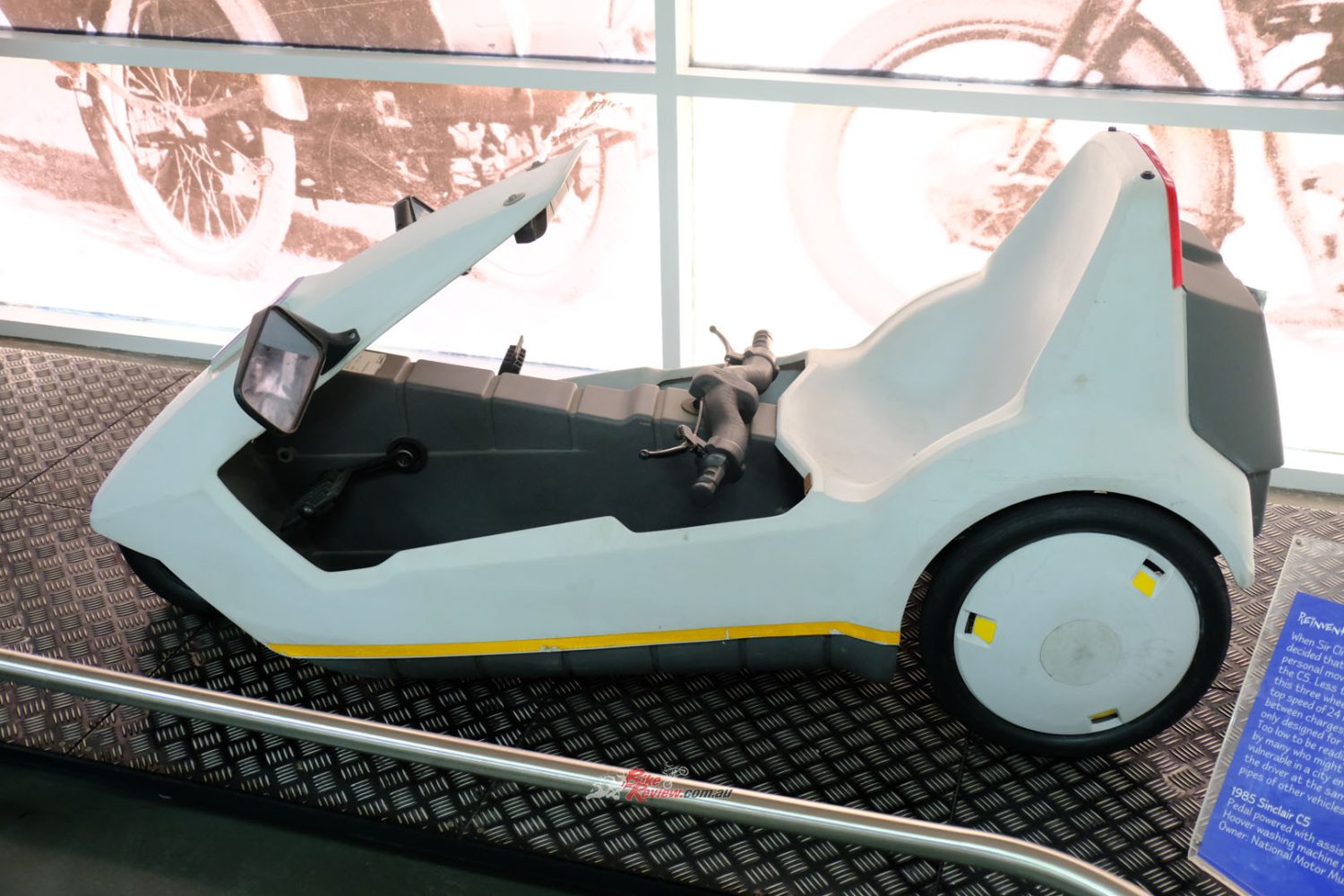 Looking for something to do in South Australia? Check out the National Motor Museum in Birdwood for a spectacular display of cars, bikes and everything in-between... Words: The Bear.

I want to like the National Motor Museum in Birdwood in the Adelaide Hills. Of course I do like it; it’s well presented, and its explanatory signs are carefully researched. It has a spectacular display of the history of Holden, with a number of one-off models…. 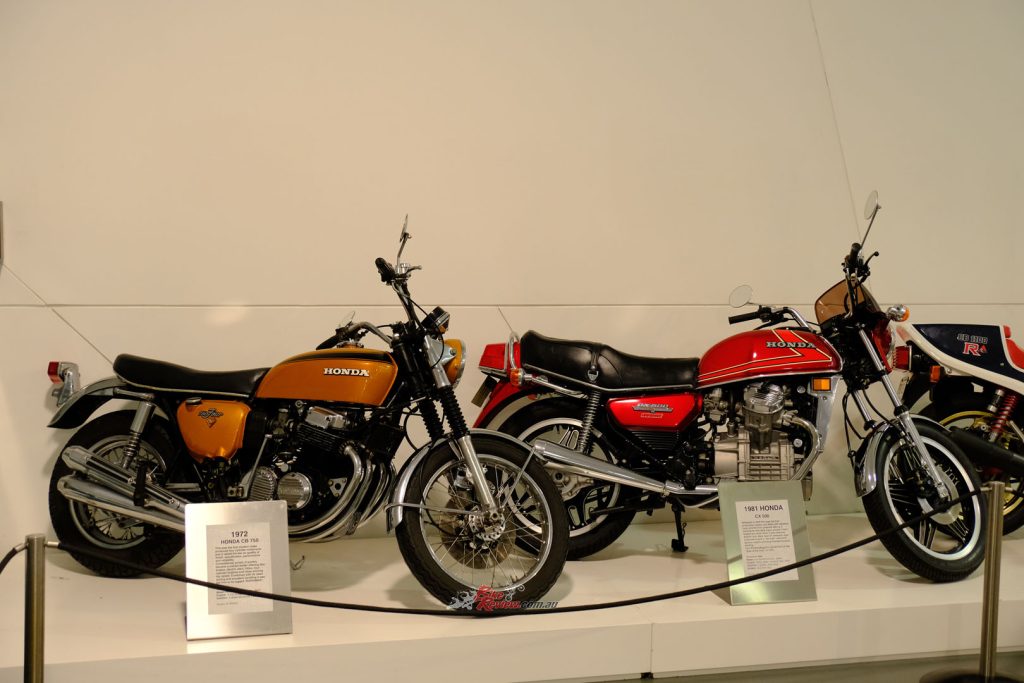 Isn’t this combination interesting! I think just about anybody familiar with both bikes would say that Honda’s CB750 was bigger than the CX500. Both bikes sold extraordinarily well, of course.

The history of Outback motoring is represented by fascinating originals, too. And it has quite a few motorcycles on display. As so often, most of these are lined up side by side which makes it difficult to fully appreciate them, but I guess space limitations are universal. But I could like it a lot more…

The museum sort of misses the point suggested by both its location and name. Consider that at one time or another, Australia had a total of more than 200 motorcycle manufacturers. Most of these were in South Australia, largely because the State had a well-established engineering sector led by a combination of immigrant British and German blacksmiths and metalworkers. One of these, probably the best-known (and the longest surviving), was Rex Tilbrook, and one of his race bikes is on display. 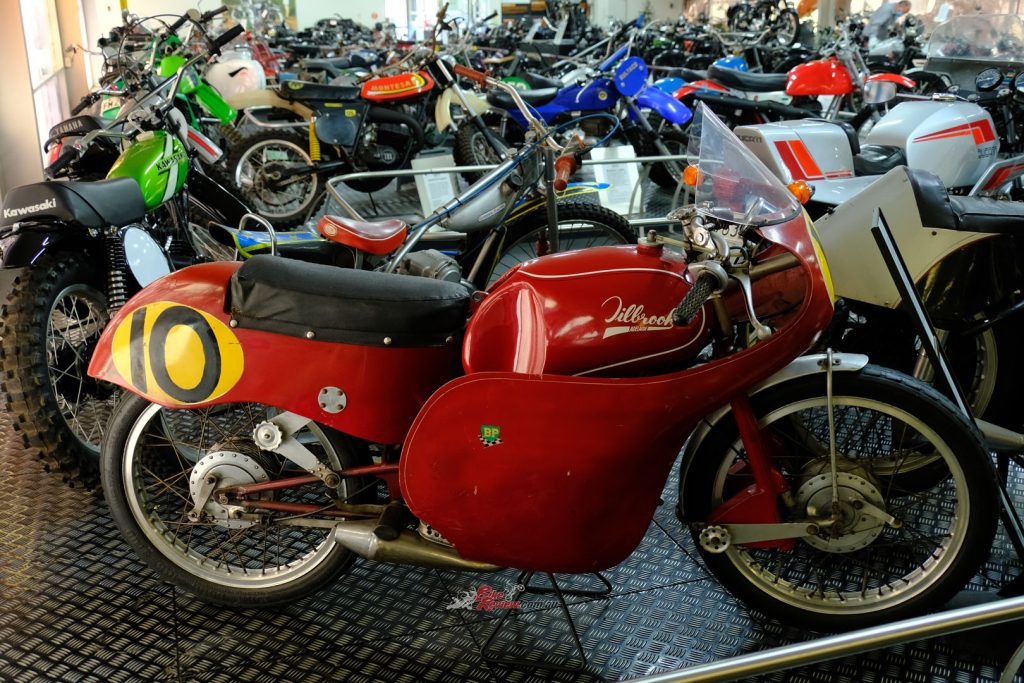 But the museum misses the opportunity to tell the story of motorcycle manufacturing in its own State and the rest of Australia. It wouldn’t require a large number of bikes; just a dozen or so, illustrating the beginnings and progress of the industry, would be wonderful. Surely it wouldn’t be beyond the capacity of the museum to source appropriate bikes. They would not even be particularly expensive if it was a matter of acquiring them, and they already have a Waratah which could well figure in such a project.

Instead of that, the “National” Motor Museum has followed the policies of most motorcycle museums, and has rounded up the usual suspects, primarily from England with a couple of Ducatis, Indians and Harley-Davidsons for leaven. 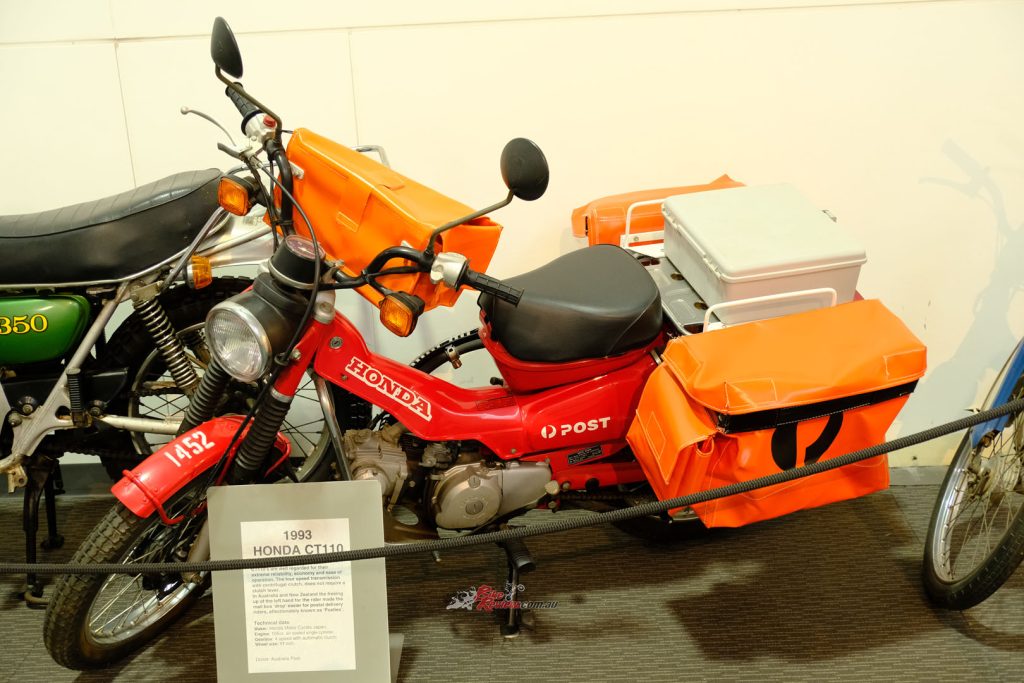 It’s always interesting to see your own work, even in a museum! Australia Post commissioned me to make it safer to deliver mail via bike. This bike is the result.

Not that there aren’t some clever touches, such as placing a 1972 Honda CB750 next to a 1981 CX500. The CX is significantly bigger than the 750, which brings home both the unreliability of memory (I would have sworn that the CB750 was the bigger bike) and the way motorcycles have steadily grown since that revolutionary four-cylinder blockbuster.

“When Australia Post realised that the job of delivering mail by motorcycle was the most dangerous thing they asked any of their workers to do, they commissioned me to make it safer.”

Next to these two truly historic bikes is a 1993 Honda CT110 postie bike. This has personal significance for me because I, along with Jack Burger of JAB and Grant Roff, better known then as Wrench McTaggart, created the delivery system shown on the bike. Before our intervention, postie bikes had heavy leather saddlebags and “delivery bags” in front of the steering head (making them prone to fatal tankslappers). We fixed those and made a few other innovations that made postie’s lives safer and possibly even saved some lives. I’m still very proud of our work. 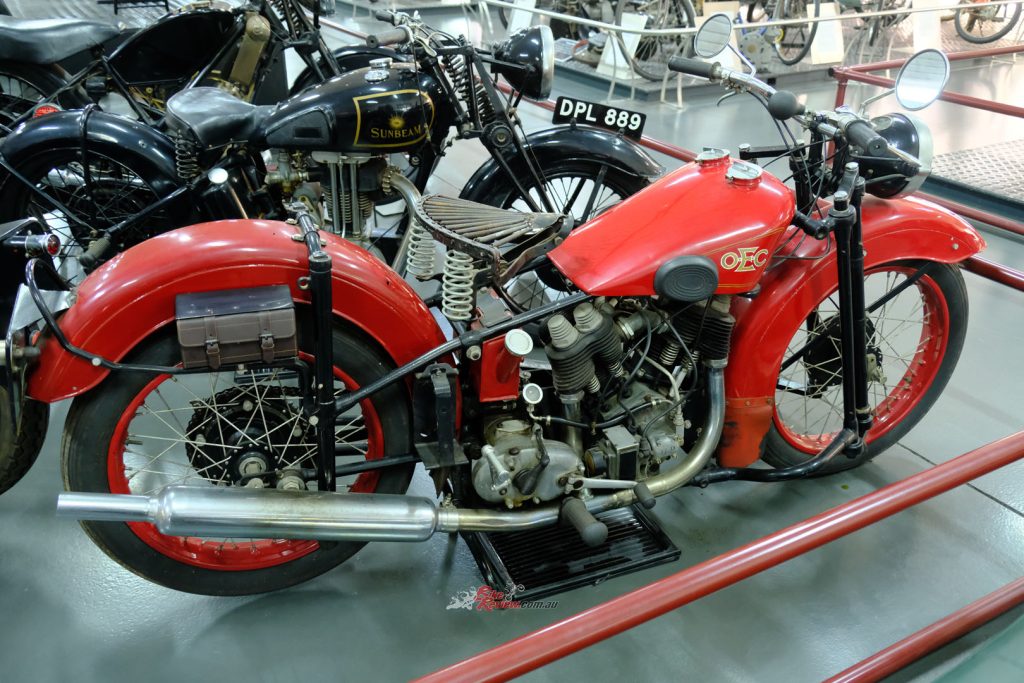 The weird exoskeleton of this OEC saw it called a “two-wheeled car”. The frame/suspension combination worked well at speed, but not otherwise.

There is also an example of the English OEC with a frame and suspension setup that has been described as being “a two-wheeled car”. Take a look at the photo and see if you can work out the principle behind it. The setup didn’t catch on, partly because it made the bike difficult to ride at low speeds, but it is wonderful to see such an example of innovation.

“Another interesting example of innovation on display is the 1985 Sinclair C5. Having ridden/pedalled one I feel comfortable describing it as a death-trap.”

Another interesting example of innovation on display is the 1985 Sinclair C5. Having ridden/pedalled one I feel comfortable describing it as a death-trap. Underpowered by a vacuum cleaner motor, assisted by pedals, the C5’s top speed of 24km/h meant that it could not keep up with traffic. As well, it was so low that car drivers could hardly see it. There were other drawbacks, but let us draw the blanket of history over them. I certainly did just that when I handed back the “test” C5 to the importer. 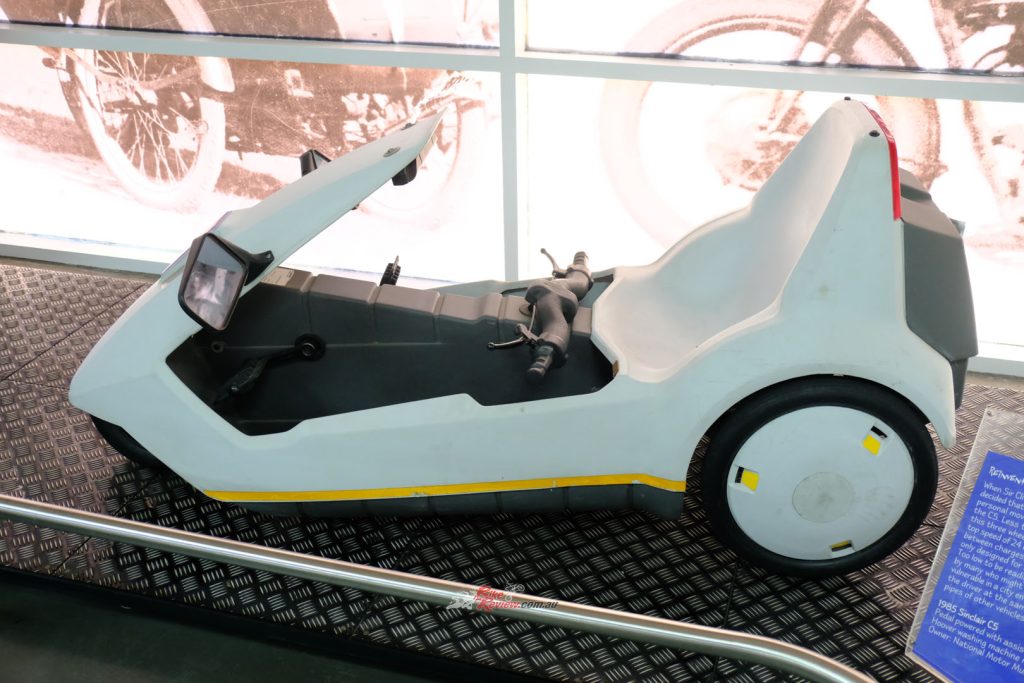 One of the very earliest modern electric “motorcycles”, the Sinclair C5 gave its rider the unique opportunity to breathe the exhaust fumes of the other traffic as it rolled along at a leisurely 24km/h.

Please don’t let me put you off visiting Birdwood. The museum is terrific in so many ways with some fascinating displays, like the lineup of the outrageous Lightburn Zetas. The museum has all three models, including the unbelievably rare ute. The buildings and grounds are beautifully laid out, and there is plenty of opportunity for kids to play. One undoubted attraction of the museum is its location, right in the middle of some of Australia’s most wonderful motorcycle roads. I’ll have to write about those for you some other time.

The National Motor Museum is in Shannon Street, Birdwood SA 5234. You can’t miss it; it’s right across the road from the pub, which has a small delivery truck on its roof. Check out their website here. 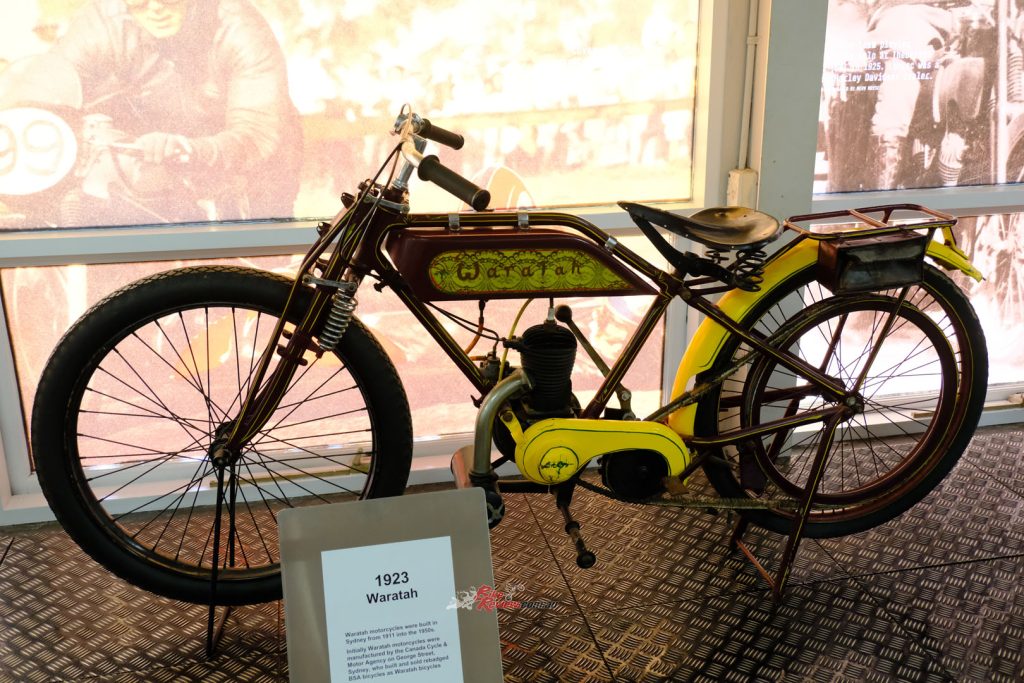 This Australian-built 1923 Waratah is a perfect example of the kinds of motorcycles made in this country. It has an imported motor, but the frame and ancillaries were all Australian. 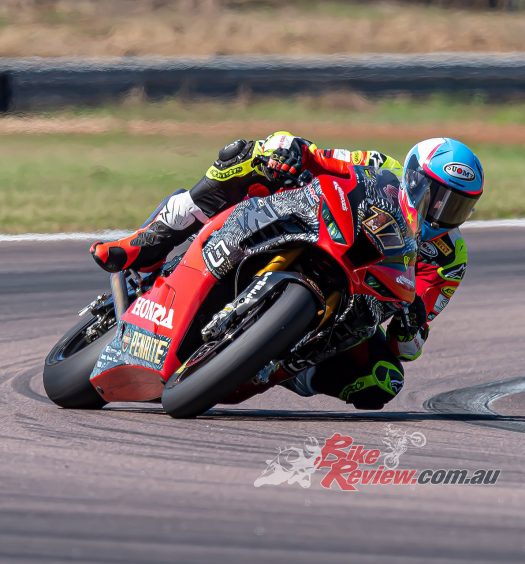 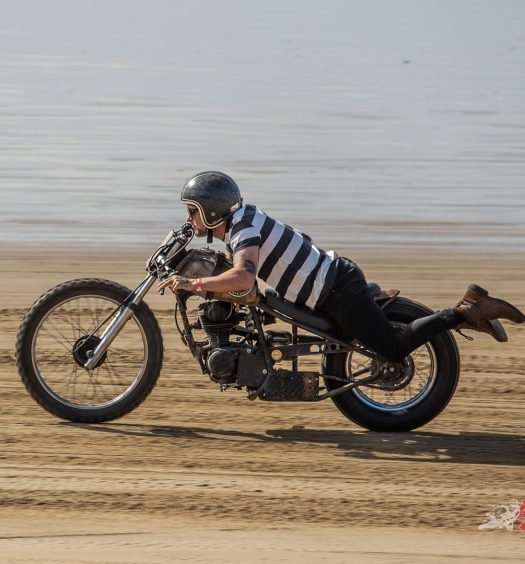