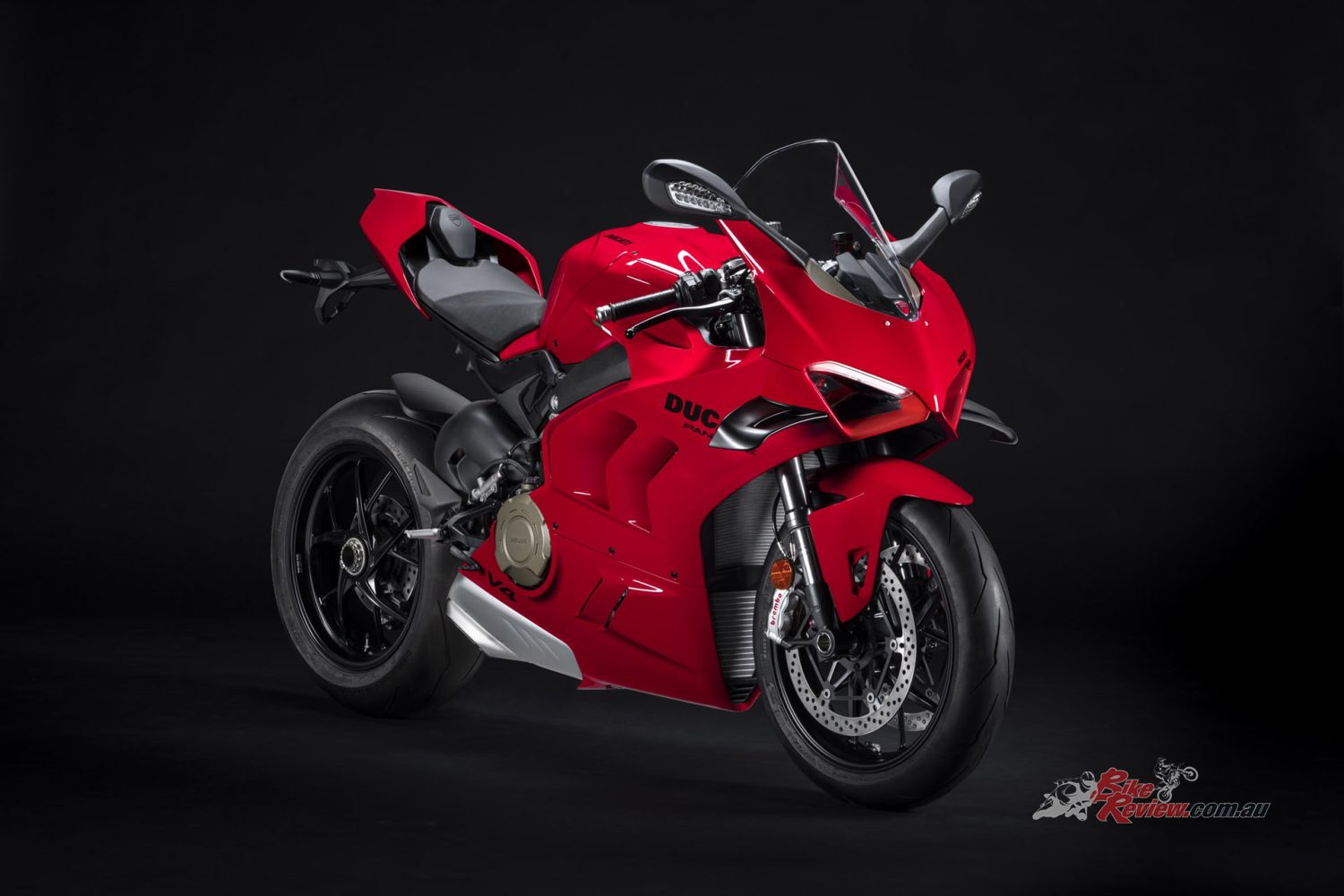 With the 2022 version, Ducati say the Panigale V4 project takes the most significant evolutionary step since its presentation, to become even faster on the racetrack, while being more intuitive and less tiring for a wide range of sport riders. 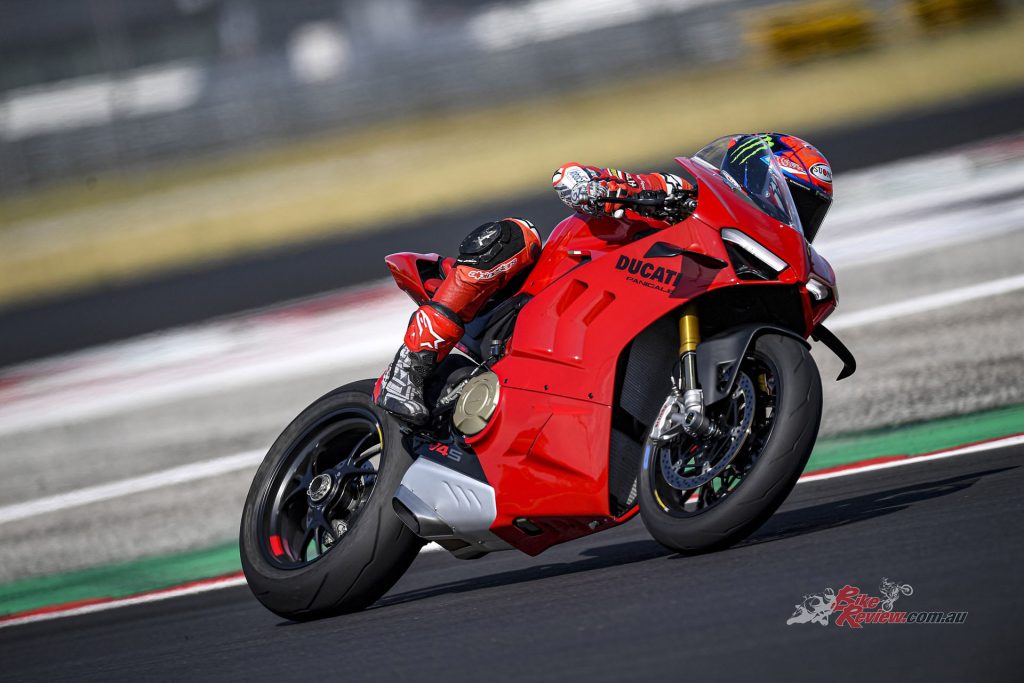 Pecco has been testing the new Panigale V4 and V4 S as he’s no stranger to the Ducati technology.

The Panigale V4 2022 represents the last step in the characteristic path of the Borgo Panigale sports bikes and it takes life from Ducati Corse’s long-time experience married to continuous knowledge and technology from the world of racing directly to production bikes. Ducati say this new project expresses the uniqueness of a brand capable of winning the MotoGP constructors’ championship for the second consecutive time, which works to ensure that every single element designed for competitions can then be transferred on motorcycles built for enthusiasts.

With the 2022 version, the Panigale V4 project completes the most significant evolution since its birth. The improvements involve all areas: aerodynamics, ergonomics, engine, chassis and electronics. The result is an even faster bike on the racetrack and a more intuitive and less tiring ride for a wide range of skill levels. 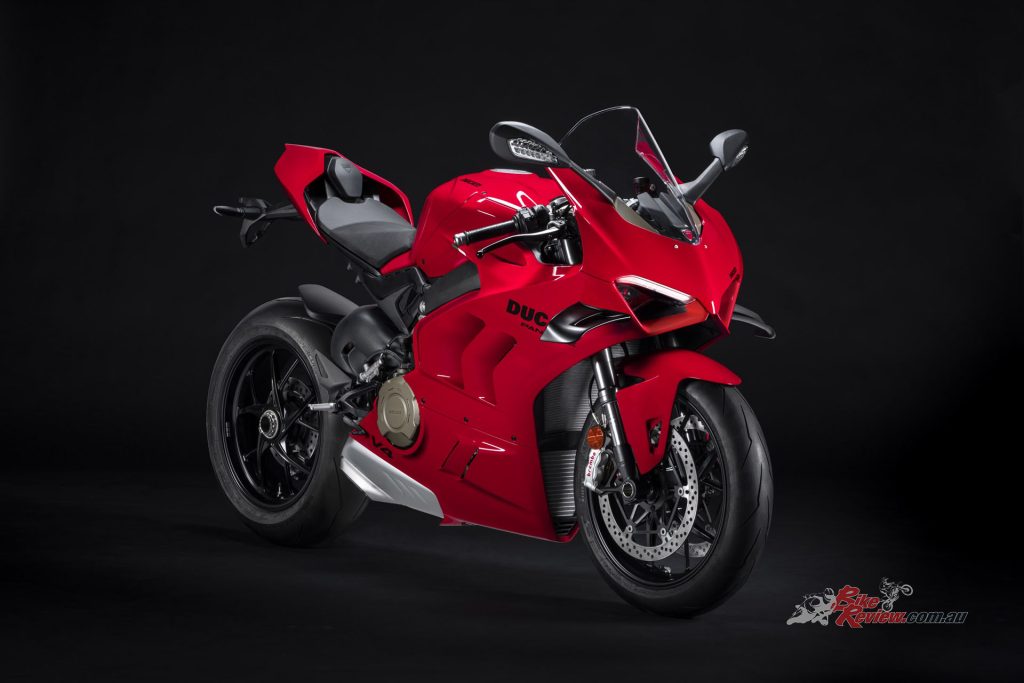 The new Panigale V4 2022 has been improved in all areas: aerodynamics, ergonomics, engine, chassis and electronics.

These exclusive features have been confirmed through a special testing on the Vallelunga racing track, in Italy. The Panigale V4 S 2021 and the 2022 version both equipped with Pirelli SC1 tyres gained centre-stage, ridden by two testers joined by the pro-rider Michele Pirro (Ducati Official Tester). At the end of the day, it turned out that the first tester improved his best lap on the new Panigale V4 S 2022 by 0.9 seconds, the second by 1.2 seconds, while Michele Pirro was faster by half a second, lapping just three seconds off from his best time in Race 1 at Vallelunga, on the occasion of this year’s Italian Superbike ​Championship, where he raced counting on the SCX compound. 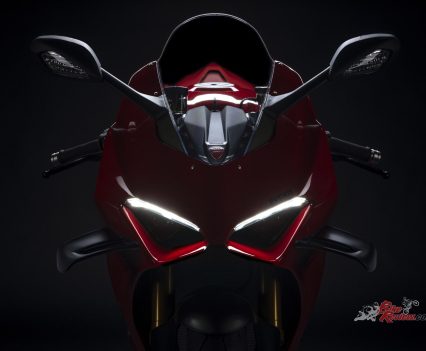 Aerodynamics have been improved. 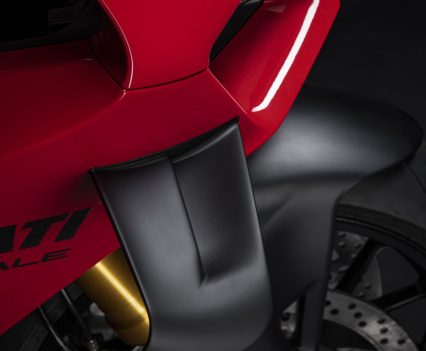 The first new feature of the new Panigale V4 2022 version has to do with aerodynamics. Ducati engineers integrated more compact and thinner double-profile design wings with increased efficiency: this update guarantees the same vertical load, up to 37kg at 300km/h. The lower part of the fairing features redesigned extraction sockets to improve the cooling system, as a consequence, the performance of the engine. 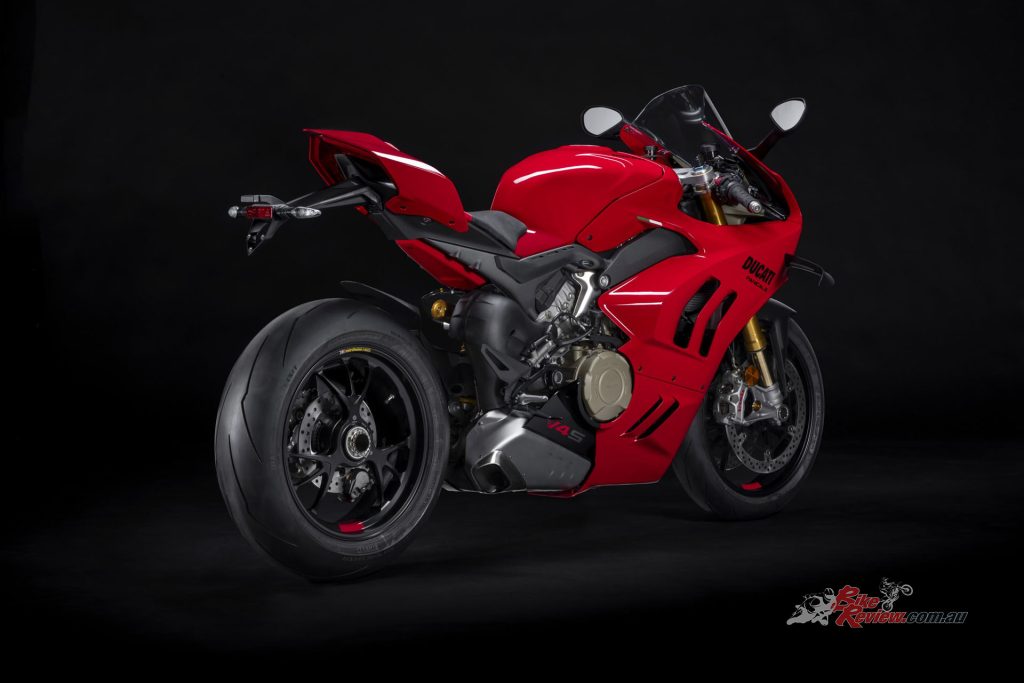 The seat can now count on flatter shape and a different coating, to better support the rider when braking and allow easier movement of the body. Compared to the 2021 version, the tank has a new shape in the rear portion allows the rider to have a better knee grip when braking. Thanks to the new ergonomics, Ducati say the rider is completely integrated into the bike and more comfortable when riding in general… 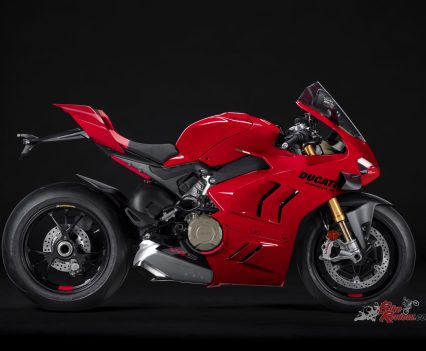 Seating position has been improved… 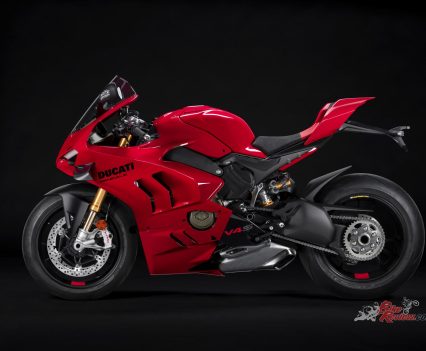 …for more comfort and better control of the bike.

The heart of the bike is a 1103cc Desmosedici Stradale MotoGP-derived engine, which has undergone a series of updates. The new engine has been updated in the oiling circuit and is coupled to a new oil pump that reduces power absorption. The increased diameter of the silencer outlets allows to reduce the exhaust back pressure. Thanks to these interventions and a new dedicated mapping, the Desmosedici Stradale – Euro 5-compliant – delivers 215.5hp@13,000rpm, with a power increase of 1.5hp compared to the previous version, which rises to 2.5hp over the peak of maximum power at 14,500rpm. The engine also delivers a torque of 123.6Nm@9,500 rpm, and already from 6,000rpm it provides 80 per cent of the maximum torque available. 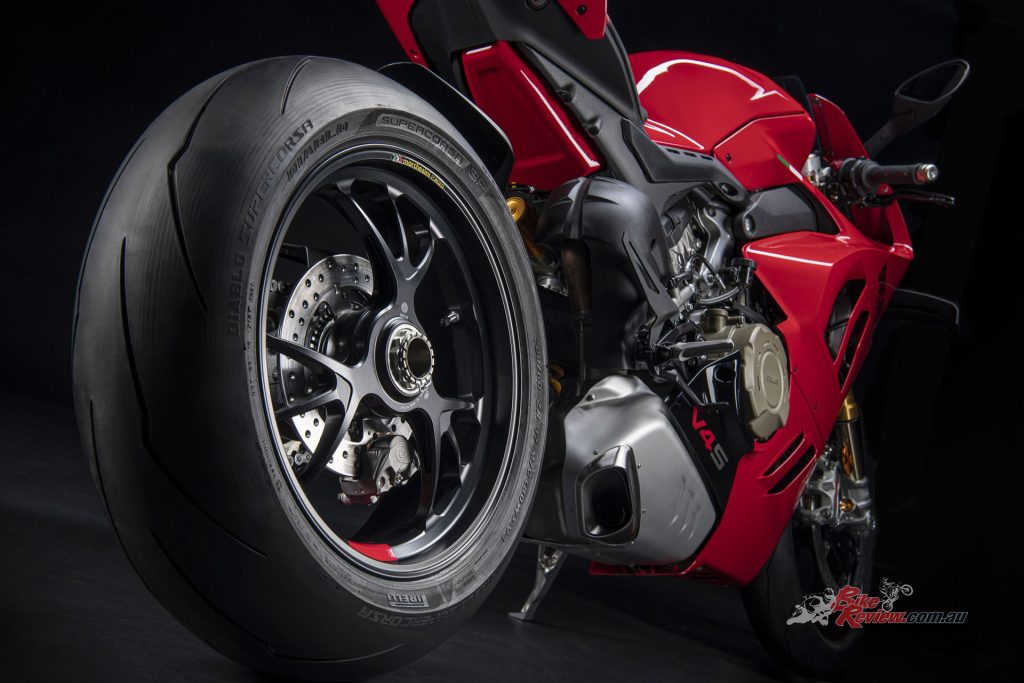 “A detail that says a lot about the evolution characterising this new 2022 engine is the adoption of a new gearbox that provides for a lengthening of the ratio for the first, second and sixth gears.”

A detail that says a lot about the evolution characterising this new 2022 engine is the adoption of a new gearbox that provides for a lengthening of the ratio for the first, second and sixth gears. This new SBK gear ratio is more “racing-oriented”. The first gear has been lengthened by 11.6 per cent, while the second by 5.6 per cent. Thanks to this new gearbox, it is now easier to tackle the tightest corners in first gear, enjoying greater engine braking and better acceleration. The smaller jump in speed between the first two ratios allows the DQS, equipped with new calibration, to work more effectively, offering better performance. Lastly, sixth gear has been lengthened by 1.8 per cent allowing, in combination with the increase in engine power, a top speed of 5 km/h higher than the V4 2021. 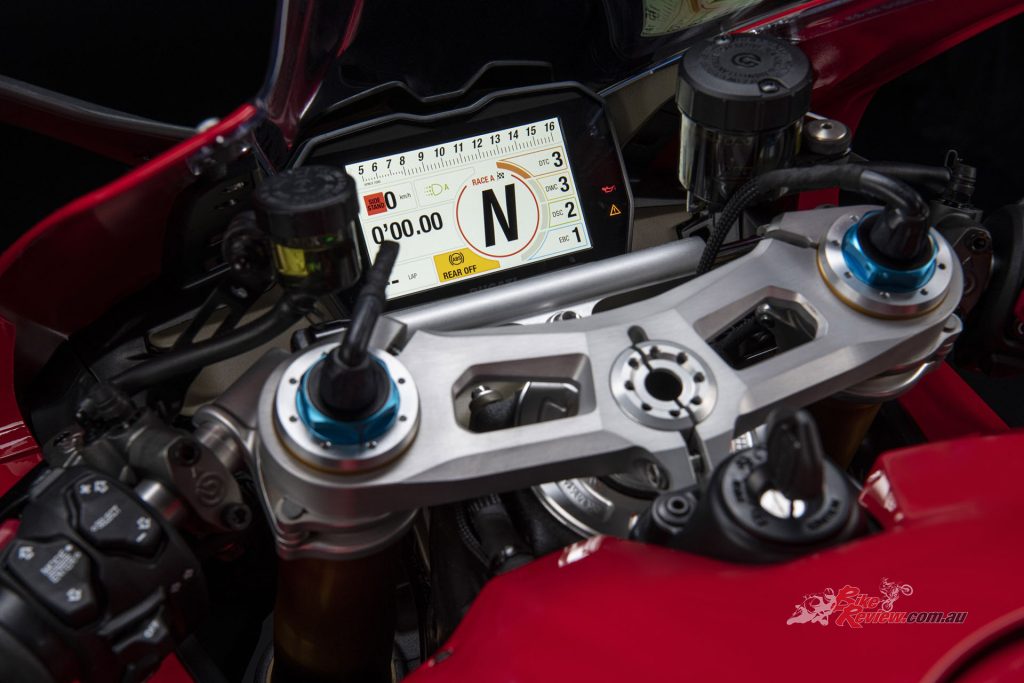 All the new Ducati riding modes can be selected through the full-colour TFT dash!

A new Power Modes logic has been implemented which provides four engine maps: Full, High, Medium, Low. The Full and Low configurations are newly designed while the High and Medium configurations use a new strategy. Power Mode Full is the sportiest ever adopted by a Panigale V4 and allows the engine to express its full potential with torque curves without electronic filters, except for first gear. A new Ride by Wire map management system has been developed for the High and Medium Power Modes; now dedicated to each of the six gears, which guarantees the rider the possibility of always having the optimal power when opening the throttle. 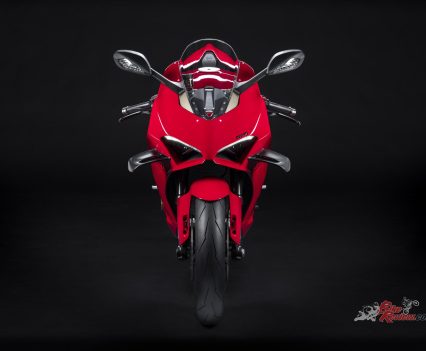 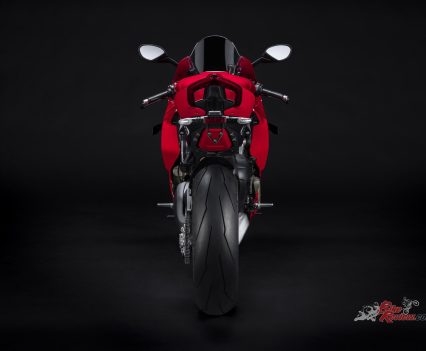 Making it easier to ride in daily situations.

The performance of the Desmosedici Stradale can be further improved thanks to the racing exhaust systems contained in the Ducati Performance catalogue. In order to offer everyone the opportunity to ride with a full racing exhaust even on circuits with tighter noise limits, a new exhaust system is available, completely in titanium, developed in collaboration with Akrapovič, which falls within the 105dB noise limit (102dB with the dB killer fitted). The new exhaust is equipped with high silencers alongside the tail and ensures a power increase of 12.5hp, bringing the maximum value to 228hp, while the maximum torque value rises to 131Nm, with an overall weight reduction of 5kg 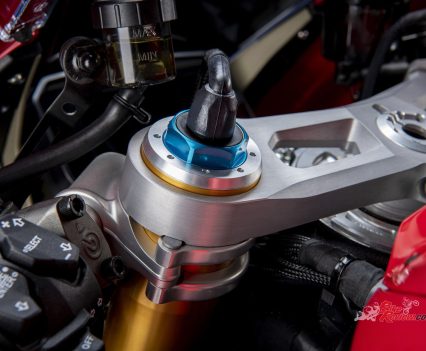 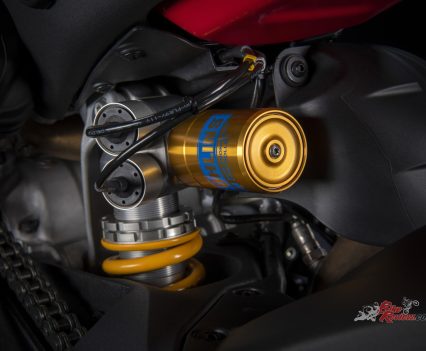 The system can be electronically controlled.

The new Panigale V4 S is equipped with the new Öhlins NPX 25/30 electronically controlled fork that uses a pressurised cartridge damping system derived from that of Öhlins racing forks, minimising the risk of oil cavitation compared to a traditional model. The result is improved braking support and better absorption of bumps, which translates into a better riding feeling for the rider. 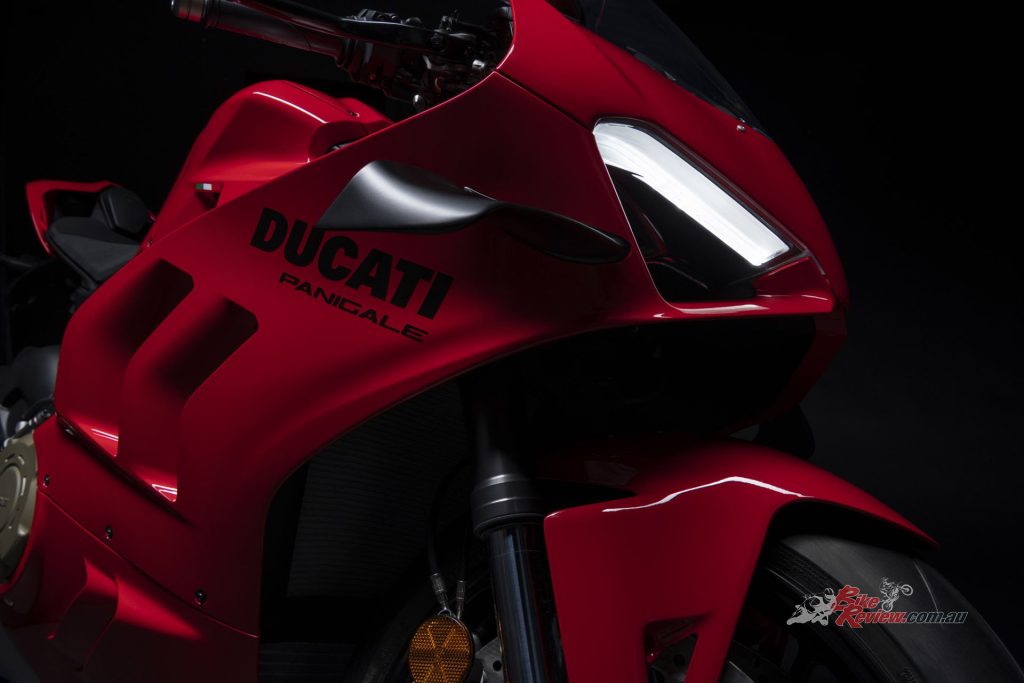 The new fork works in combination with the Öhlins TTX36 rear shock absorber and the Öhlins steering damper, both with event based control system. This system offers the rider the opportunity to customise the suspension intervention according to different riding situations (braking, cornering, acceleration), as well as changing the operating parameters of the hardware components. The pivot of the single-sided aluminium swingarm is positioned 4mm higher than the 2021 bike version. This specific technical choice increases the anti-squat action, stabilising the bike in acceleration.

The Panigale V4 S is equipped with 3-spoke forged aluminium alloy wheels and fitted with Pirelli Diablo Supercorsa SP tyres (120/70 ZR17 front and 200/60 ZR 17 rear). The braking system is equipped with Brembo Stylema monobloc calipers at the front with four 30mm diameter pistons each working on 330mm diameter discs, ensuring exceptional braking power, while at the rear there is a single 245mm disc with 2-piston caliper. 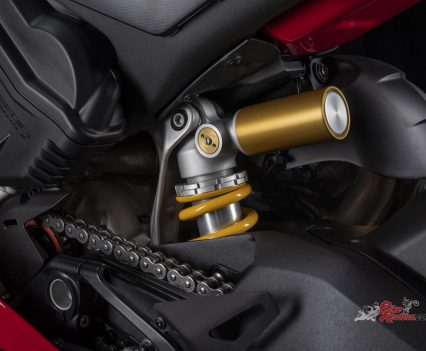 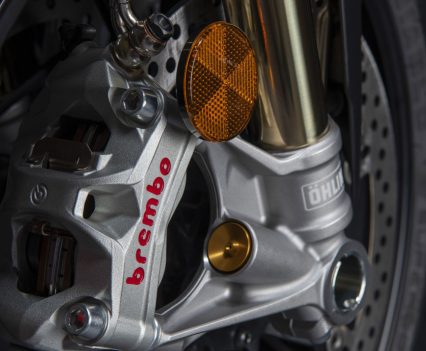 The Panigale V4 2022 is equipped with latest-generation electronic package based on the use of a 6-axis inertial platform capable of instantly detecting roll, yaw and pitch angles of the bike. Ducati technicians introduced an additional Info Mode, developed keeping in mind the MotoGP riders suggestions and named “Track Evo”, an option added to the existing Road and Track settings. In the “Track Evo” screen, the tachometer moves on a horizontal scale positioned in the highest part of the instrument and the indication of the gear engaged is in the centre of the screen. There are four sectors of different colours, each dedicated to an electronic control (DTC, DWC, DSC, EBC). These sectors light up individually when the electronics are working on a certain parameter, remaining on for the time necessary for the rider to identify which indicator is activated. 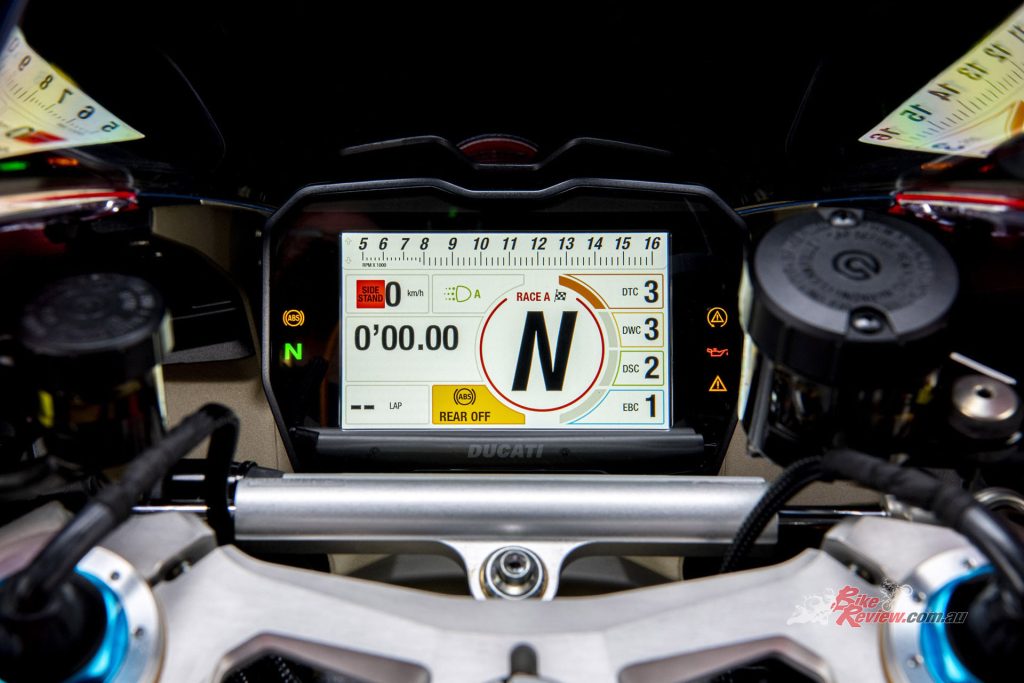 To make the gear change indication clearer, a green LED positioned on the side of the dashboard, has been introduced.

Even the look of the bike has been revamped, with a further dose of aggressive flavour. The graphic design conceived by the Ducati Centro Stile includes the black colour for the logos applied to the full red fairings, the double fabric saddle (two-tone on the S version) and, again for the S version, the red tag on the black rims. 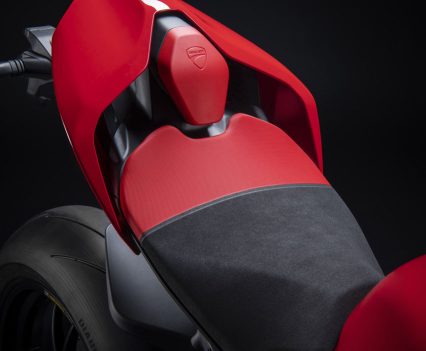 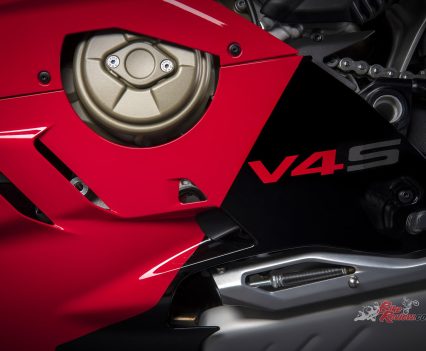 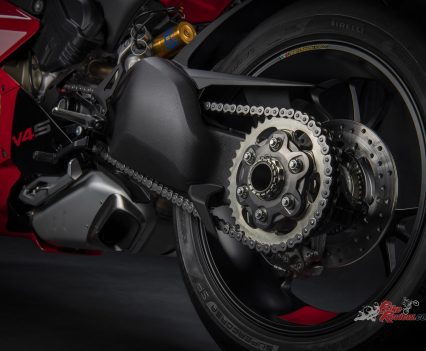 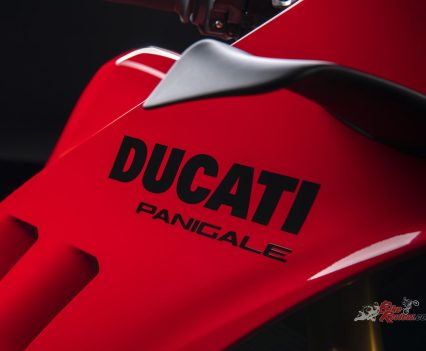 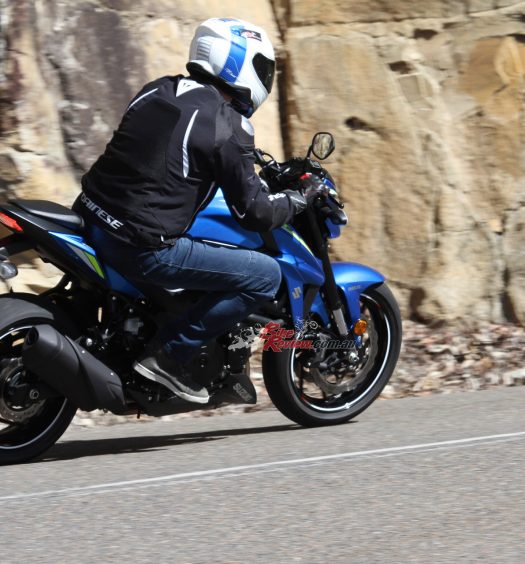 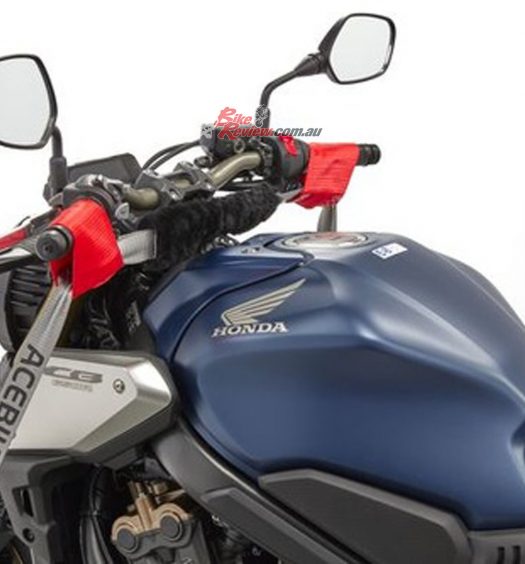