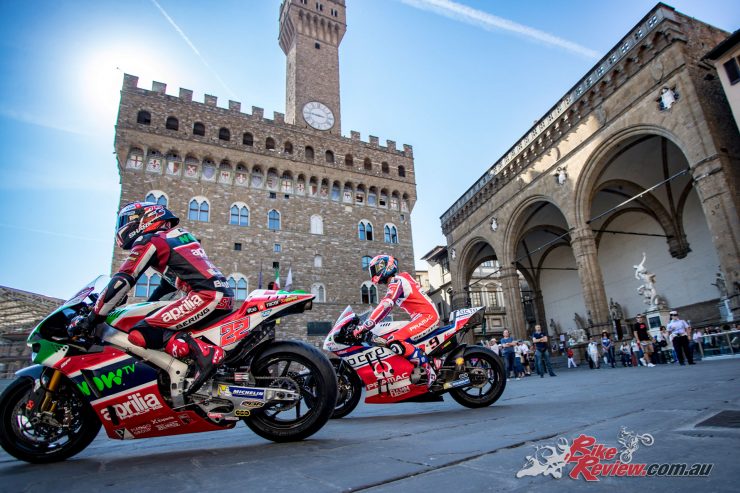 The old and the new meet: state of the art prototypes in front of 16th century jewel Palazzio Vecchio

MotoGP fires up for the Italian GP

MotoGP means business in Italy, but there was some leisure time on the menu with a first sightseeing stop ahead of the Gran Premio d’Italia Oakley as Sam Lowes (Aprilia Racing Team Gresini), Danilo Petrucci (Octo Pramac Racing), Francesco Bagnaia (Sky Racing Team VR46) and Andrea Migno (Sky Racing Team VR46) fired their engines up in central Florence, one of the true jewels of Italy and the regional capital of Tuscany.

The riders were all wearing some Nicky Hayden gear, in a tribute to their fellow rider who succumbed to injuries sustained in a crash two weeks ago. They all wore proudly hats or shirts to symbolize the respect they have for the late American rider and to pay a subtle homage to the Kentucky Kid. 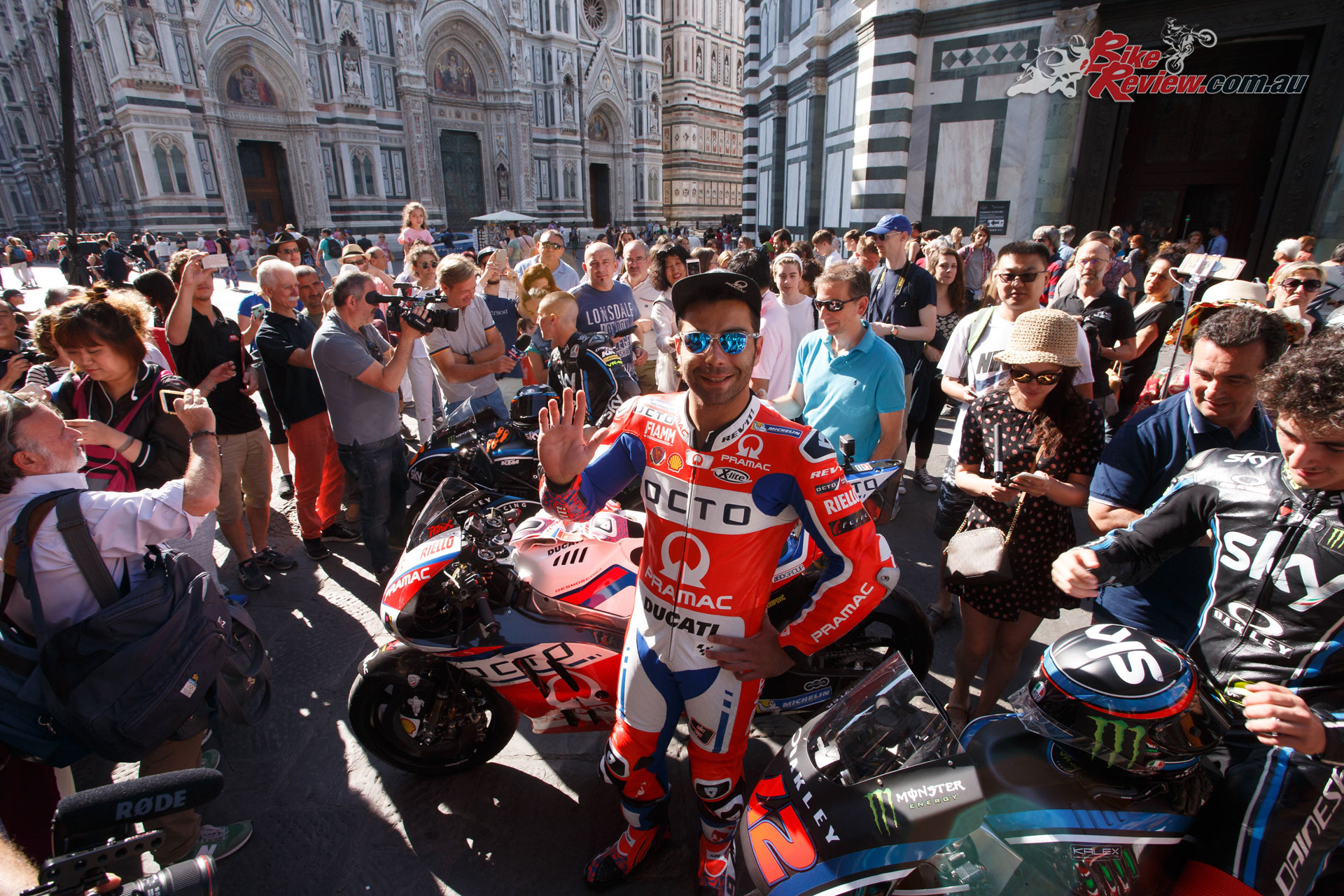 After a particularly Italian Warm Up with Lowes doing a few laps of the Piazza Santo Spirito on a vespa, ‘Pecco’ Bagnaia enjoying some gelato and Migno delivering a quick espresso to his compatriots, it was time for ‘Petrux’ to put down his newspaper and for the four to do what they do best: ride.

The first stop was the incredible Ponte Vecchio, the bridge that crowns the river Arno in the center of Florence and the perfect backdrop for the first photo opportunity.

Then it was engines on for man and machine as the four headed off to the Piazza della Signoria in front of the imposing 13th century Palazzo Vecchio, before the chequered flag flew at one of the most beautiful and famous buildings in Italy: the Cathedral of Santa Maria del Fiore – a true emblem of the city. 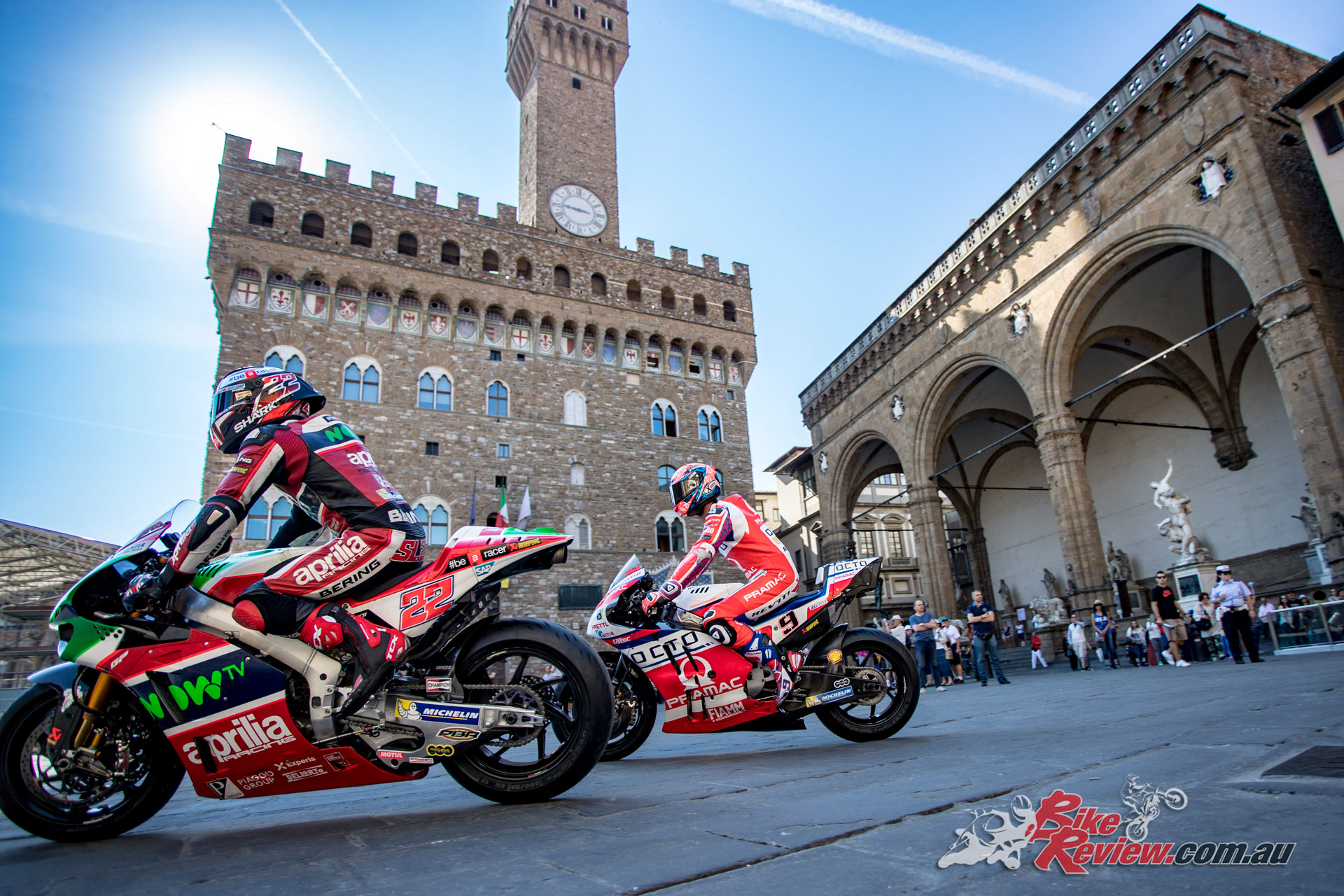 The old and the new meet: state of the art prototypes in front of 16th century jewel Palazzio Vecchio

There is magic around every corner at Mugello, and the same can be said of Florence – with the final photo opportunity at the ‘Duomo’ the crowning jewel for one of the most picturesque pre-events on the calendar. Mugello is more than a race, and Florence is more than a city.

Now, it’s back to the hills of the surrounding countryside and back to the track for the riders as they get ready to race the stunning 5.2km ribbon of Tuscan tarmac on Sunday.