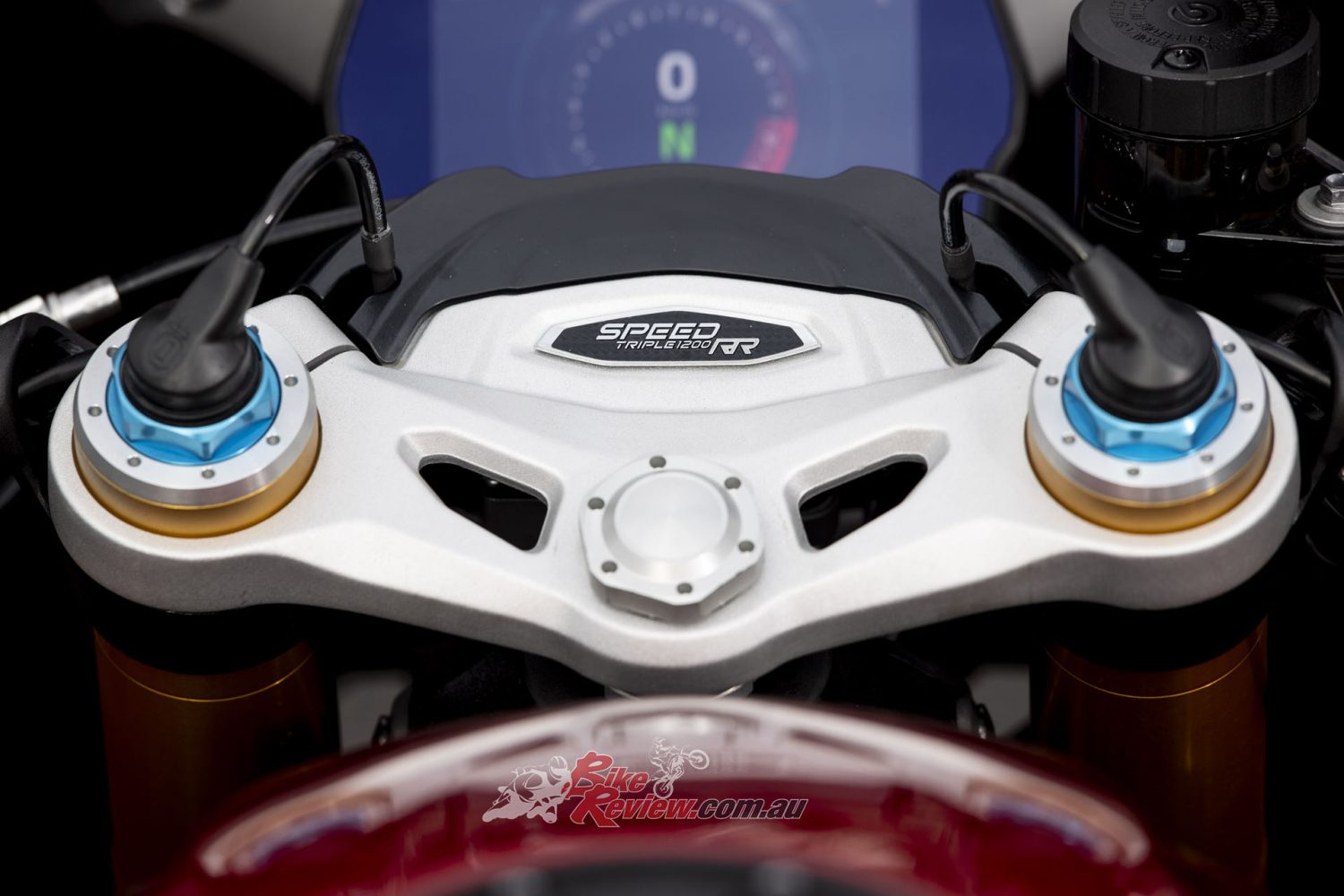 ...as well as that amazing Ohlins suspension!
FeatureFeature ArticlesInterviews

The Triumph Speed Triple marks everything that the brand set out to achieve since its restart to production back in 1991. Topping the Triumph range for three decades, the Speed Triple is a staple for British automotive design and development! 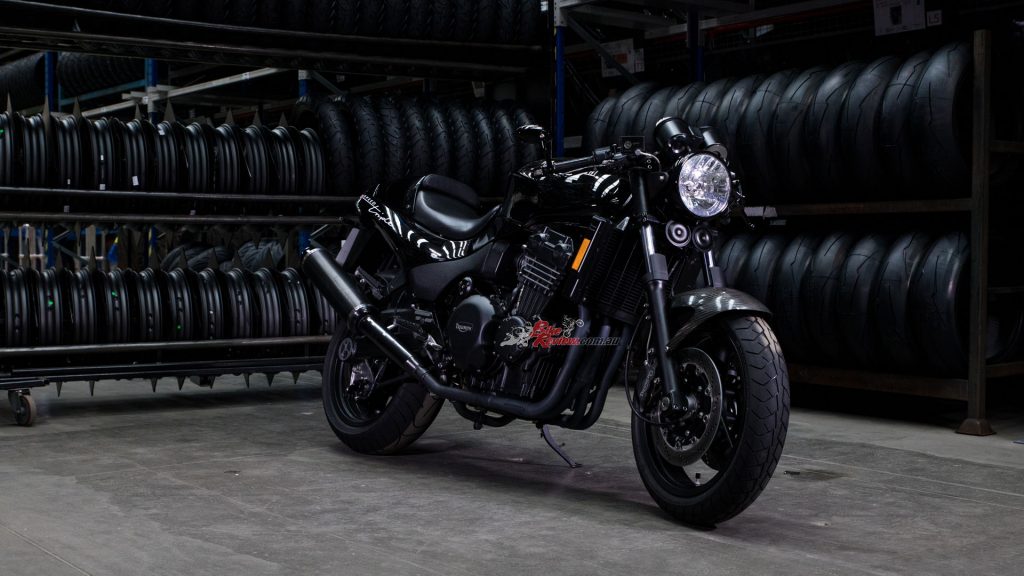 In 1994, the first Speed Triple burst onto the world stage with plenty of character through its triple cylinder heart!

The 102,807 examples of the Triumph Speed Triple in all its myriad guises which Triumph has built from 1994 up to November 1st, 2021, mark this as one of the most successful of the many highly individual models which John Bloor’s engineers have concocted since he relaunched the historic British brand exactly three decades ago, when the first Hinckley Triumphs were produced for the 1991 model year. Yes, folks – that’s how many Triumph Speed Triples have been built in the past quarter century-plus of sweeping streets and terrorising traffic-lights, while making such a key contribution to Triumph’s bottom line in doing so. 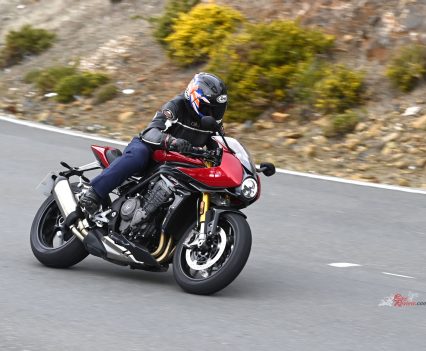 “It’s not as extreme as a Supersport stance, but you do notice it at lower speeds, where the airflow over the rather low screen isn’t relieving the pressure on your arms.” 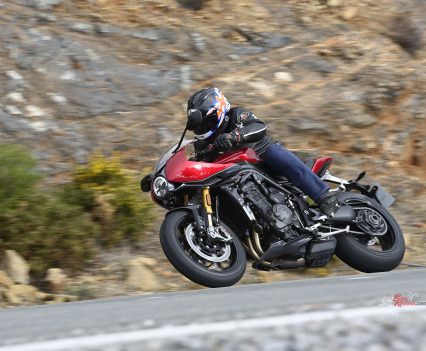 From being a somewhat crude concoction when first created in 1994 by simply deleting the bodywork from the three-cylinder Daytona 900 sportbike, the Triumph Speed Triple was transformed into a serious streetrod with the introduction two years later in 1996 of the T509 version complete with John Mockett’s so-distinctive goggle-eyed styling, and a fuel-injected 885cc motor. 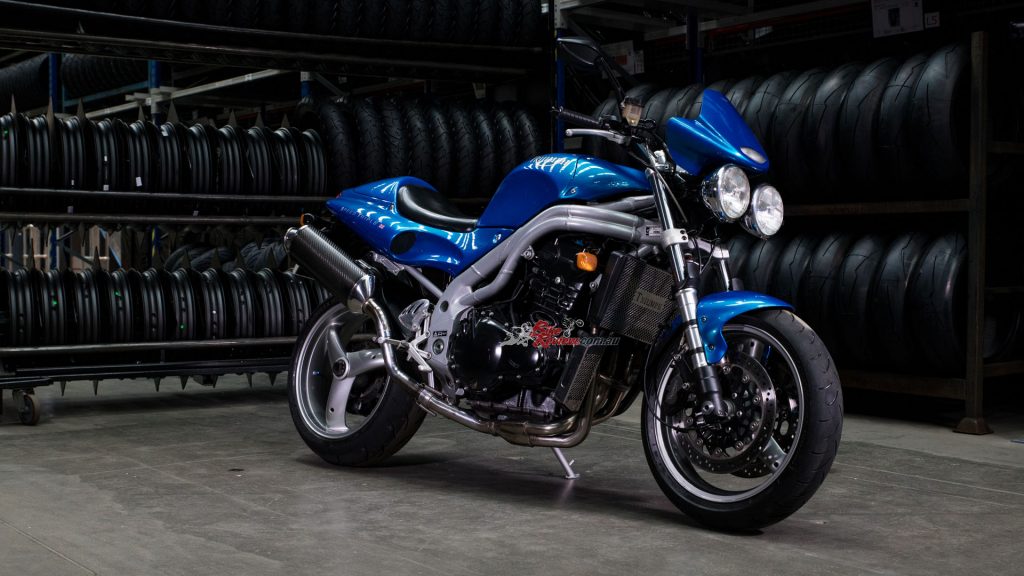 We can’t forget the introduction of the twin headlight on their RS, kicking off a new era for the brand.

This was replaced in 1999 by a new-generation 79 x 65mm 955cc engine producing the same 108hp dyno readings, but with much improved torque. This had a makeover in 2002, with the introduction of a power-up version of the 955cc motor, delivering a boost in power to 118 bhp, plus increased peak torque of 100Nm. Then in 2005 Triumph delivered heaps more power as well as acres more grunt by stroking the engine to produce 79 x 71.4 mm dimensions, and a claimed 128 bhp from the resultant 1050cc motor, as well as a nice increase in torque to 105Nm. 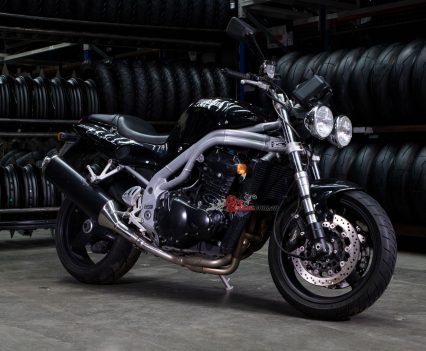 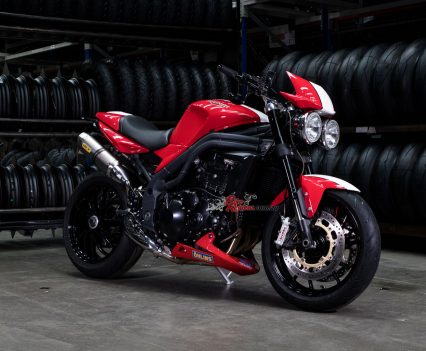 Then in 2005 Triumph delivered heaps more power as well as acres more grunt by stroking the engine to produce 79 x 71.4 mm dimensions.

2011 saw a major makeover, with the same 1050cc motor now yielding 133hp/111Nm, but perhaps even more to the point its hyper-distinctive bug-eye headlamps were replaced as part of a total restyling package by less retro but still distinctive twin pentagonal wolfeye headlights. Less attitude, more PC. But the sales numbers still kept right on churning, so that by the end of 2015 Triumph had sold no less than 56,929 Speed Triples with the 1050cc motor, and a remarkable 77,800 examples exactly of all versions of the model built since its 1994 debut. 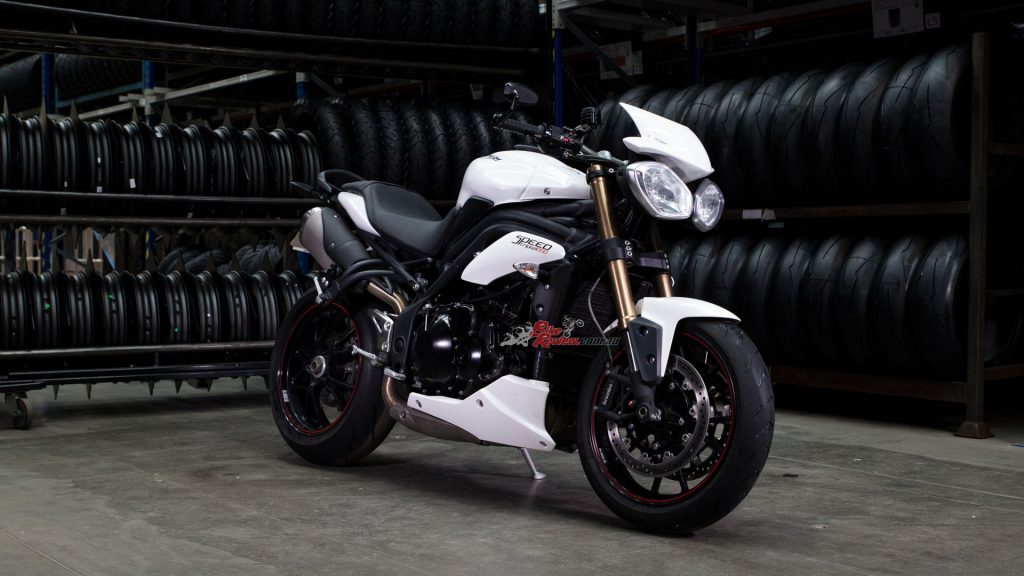 2011 saw a major face change, with the iconic twin-headlights changing shape. The update saw the Speed Triple keep the same 1050cc motor but it was now yielding 133hp/111Nm.

However, in 2015 as it celebrated its 21st birthday, the motorcycle which for the past couple of decades had been the marketplace reference for hooliganbike hot-rodding, had actually grown somewhat warm and cuddly – respectable, even, by comparison with the brash copycat kids from KTM, BMW, Ducati and Aprilia which had since been devised to knock the British bike off its best-selling pedestal via more cubes, more power and more grunt, plus racetrack-worthy electronics and chassis hardware. Oh, and even more attitude, an attribute which the British trendsetter model had adopted in breaking all the rules upon its creation…. 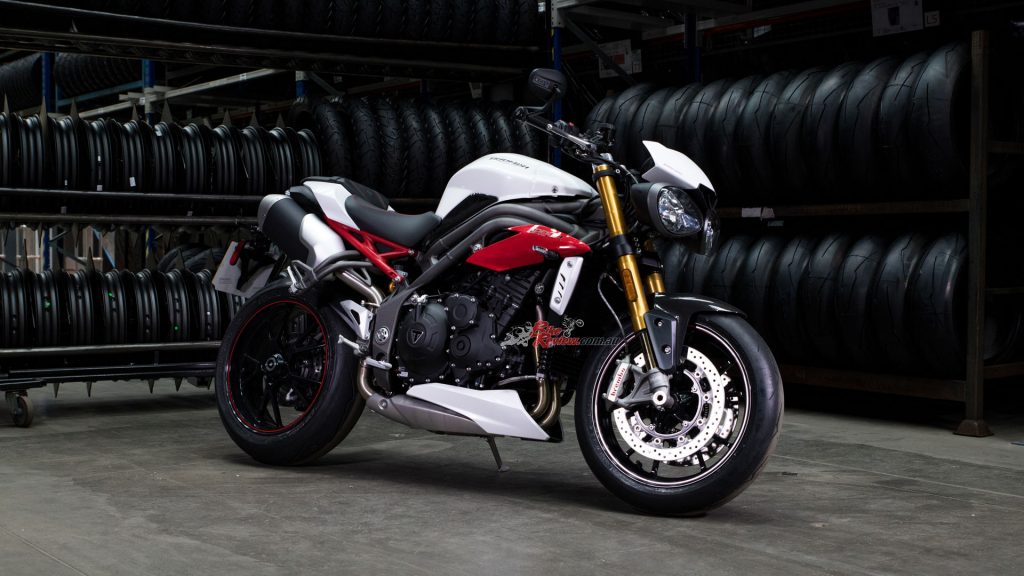 When the Speed Triple hit its 20th birthday, Triumph decided to twist the throttle on fully and make it into a truely wild machine with a suspension and electronic assist rework.

So for 2016 Triumph updated the Speed Triple with sleeker, sharper styling which regained most of the in-yer-face looks that went missing with the 2011 restyling job. It was a generational change that was partly triggered by the need to meet the new Euro 4 noise and emissions regulations, but in redesigning the Speed Triple’s 1050cc engine, Triumph retained the same 79 x 71.4 mm dimensions, albeit with 104 new components, so that it was effectively an all-new motor. The result was a 5% increase in power to a claimed 140bhp/103kW@9,500rpm, with just a small lift in peak torque to 112Nm at 7,850rpm, compared to the outgoing model’s 133bhp/111Nm at comparable revs, all while achieving Euro 4 compliance. Plus, this came with increased rideability, so many thanks to the Brussels bureaucrats for stimulating this revamp! 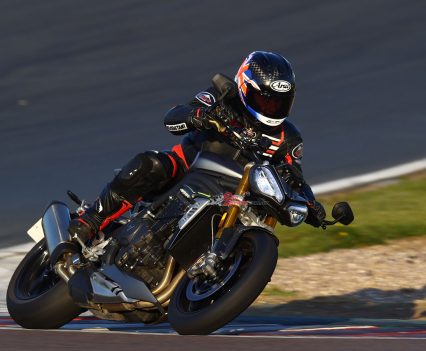 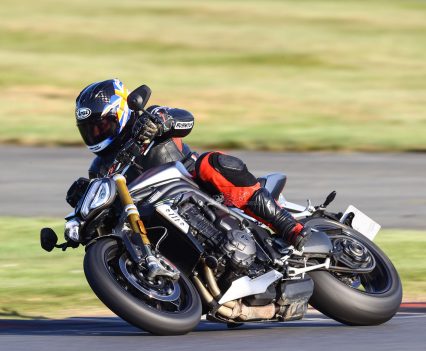 But by 2021 the time had come for a major redesign to comply with Euro 5 requirements, necessitating what amounted to a completely new motorcycle. For despite that substantial 2016 makeover, the Speed Triple had been sidelined by the ongoing power struggle between its various rivals, with 200 bhp-plus outputs – first from Kawasaki via its supercharged H2, then MV Agusta and now Ducati – seemingly the entry pass to being counted as a contender capable of serious streetfighting. 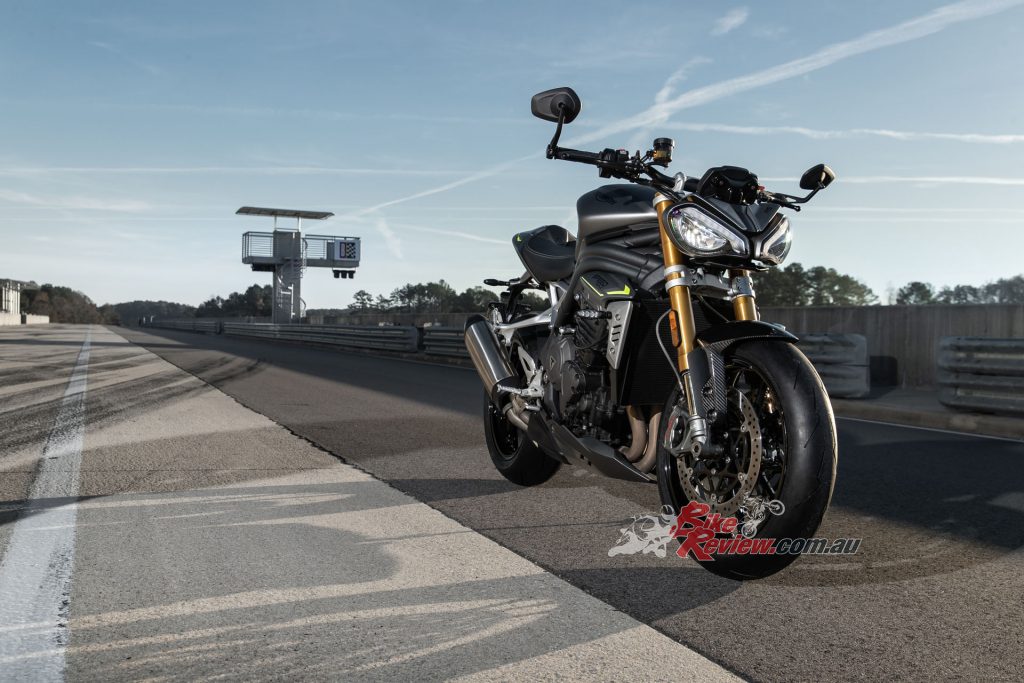 “The 2021 Triumph Speed Triple 1200 RS is the most potent and most torquey member of that family yet built.” 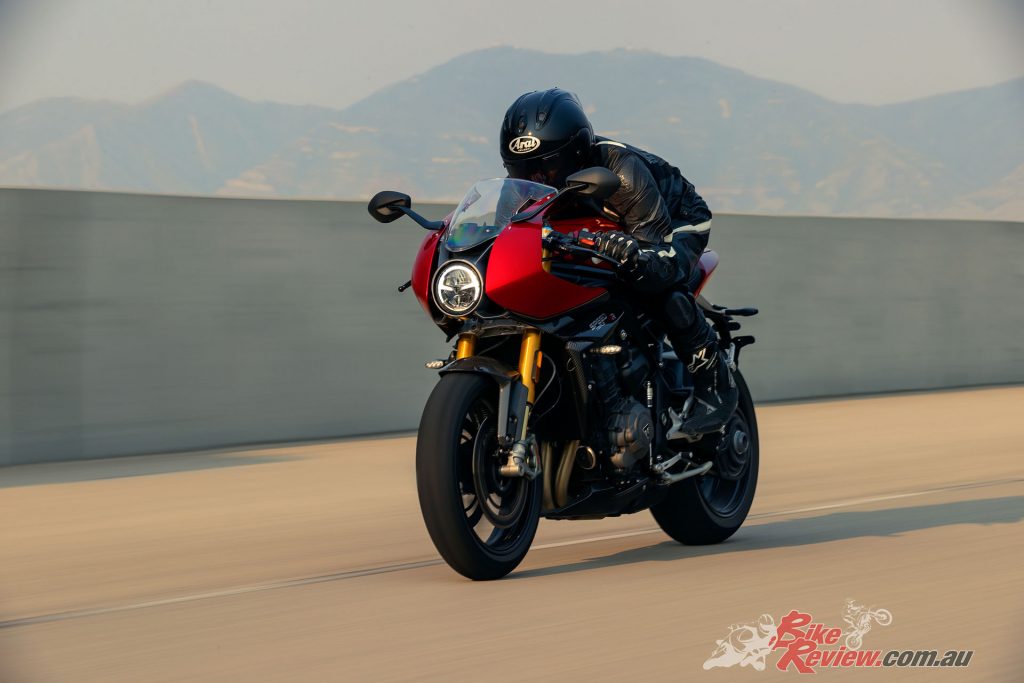 Combined with all-new styling which definitely recaptured the aggressive attitude and muscular presence of the Gen-1 Speed Triple, but with purer, cleaner and sharper-looking lines topped off by a pair of sinister-looking snakeye headlights that seemingly stared at you with unrequited malice as you circled the bike, the born-again Street Triple 1200 RS has been a hit in the marketplace, with 3,900 examples finding new owners in the first six months following its May 2021 showroom debut. But now Triumph is playing the joker in its game of cards with KTM, Aprilia, Ducati and the rest – and the 1200 RR is that bike…. 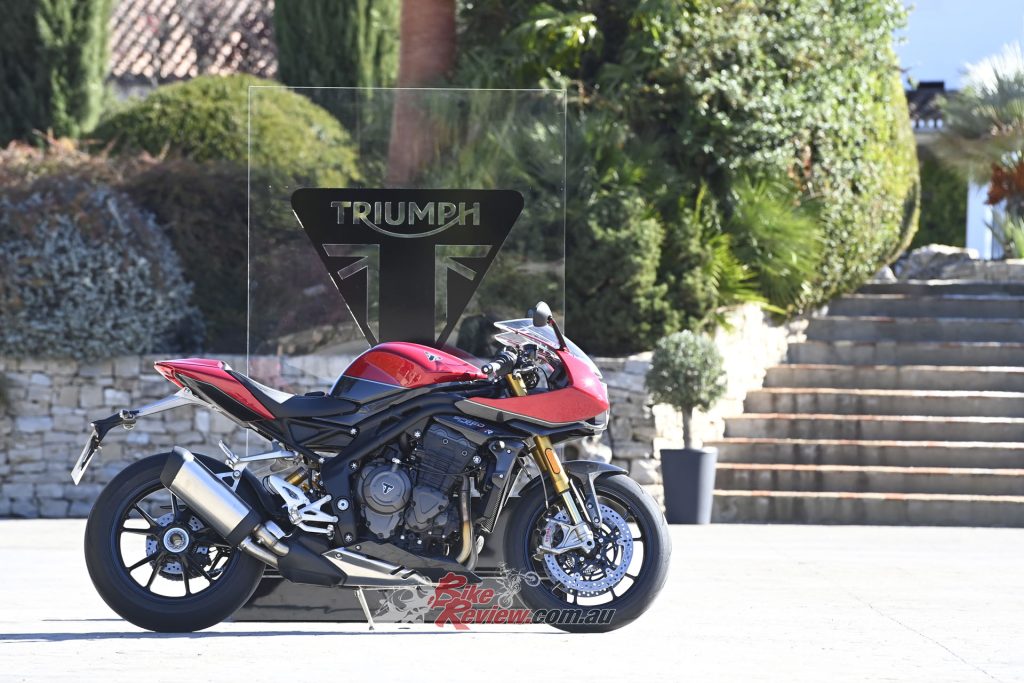 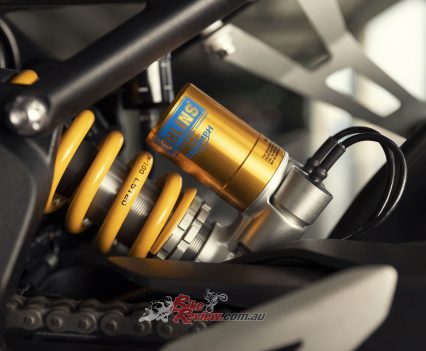 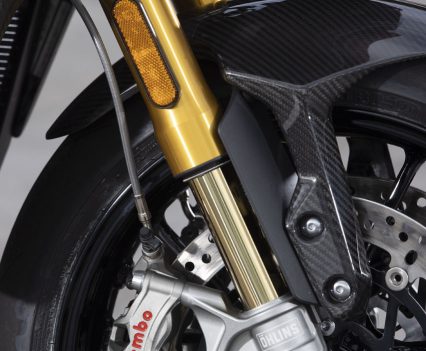 “Öhlins really understand suspension, but they also really understand customers, so I believe what they’re allowing us to offer here is really useful to a lot of riders. This is something they call ‘Objective Based Tuning Interface’, or OBTI, whereby you can simply select the outcome you want on the suspension, rather than having to know if you must change compression damping or rebound damping or anything else to achieve this – you can literally set ‘firmer’ or ‘softer’ and leave it up to the ECU to work out how it’s going to do that. And in each of the three preset positions – Comfort, Normal and Dynamic – you can make that firmer or softer by five different steps. You can do it on the fly, but when you’ve switched the engine off, it remembers the settings that you’ve chosen. It’s your choice – you can reset to the default position if you prefer. 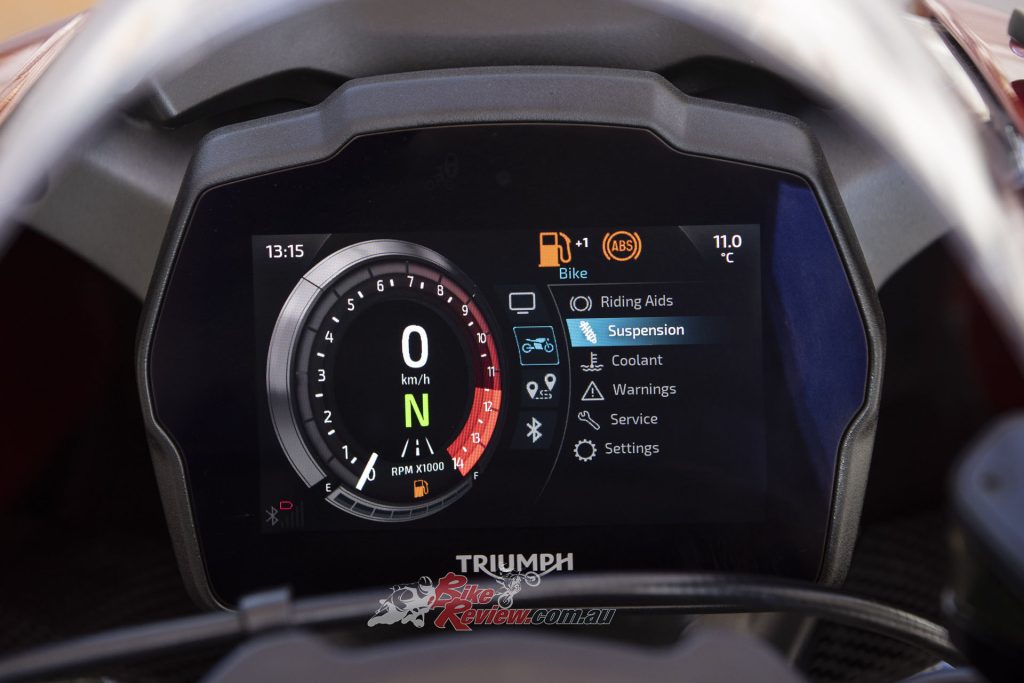 The TFT dash allows for multiple different controls like suspension pre-sets to ensure the bike suits your riding style.

“Now, there’s far more to that than just setting your front and rear firmness, because in addition with the semi-active you get brake support, acceleration support, and cornering support. What that means is that for every manoeuvre, you get not just one suspension setting, but you can have multiple suspension settings. The suspension is controlled by an Öhlins suspension control module, and you’ve got four stepper motors so that on the top of the left fork is compression damping adjustment, the right fork is rebound damping adjustment, and the adjustments on one leg or the other affect both of them, so you only need one motor per leg. 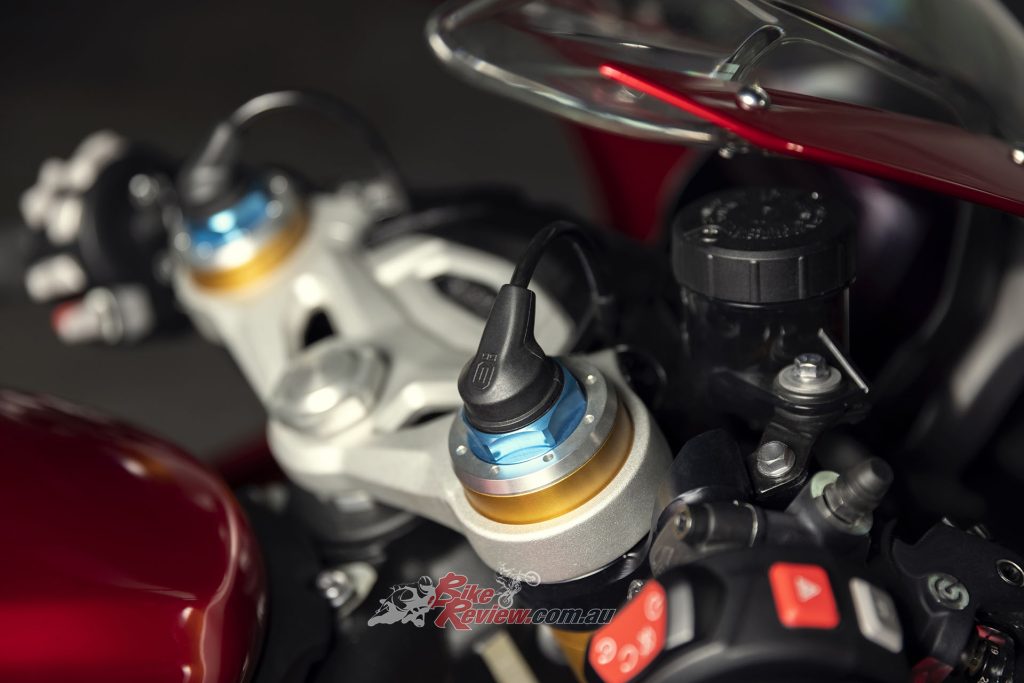 “On the RSU monoshock you have two motors, because obviously that has both rebound and compression damping adjustments in the single unit. The suspension ECU takes measurements from the main ECU, the brake-line pressure, the six-axis IMU, and the engine management system. So we’re monitoring angle of lean, the pitch of the bike, the brake force, and via the throttle position it’s monitoring the torque requested, and speed.

“Those Comfort, Normal, and Dynamic presets are embedded in the riding modes. So you’ve got a button on the left handlebar you can press to just scroll through it, and it’ll give you the Rain, Road, Sport, or Track, or a Rider Configurable mode. Select one of those presets, and that has a combination of throttle map, ABS tune, traction control tune, and suspension setting already dialled in. In the context of suspension, it’ll choose from Comfort, Normal, or Dynamic, depending on the mode. 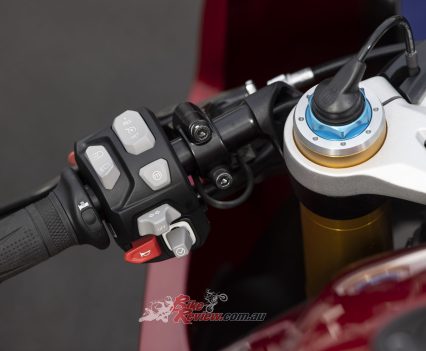 Like the RS, the RR has all the assist controls on the left hand side of the bar. 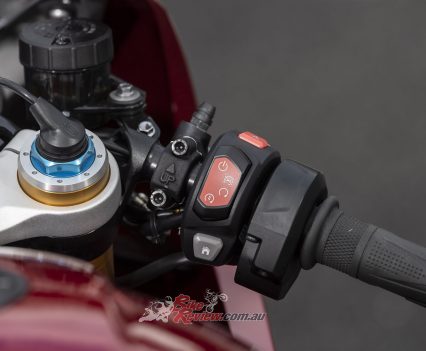 Usual arrangement on the right hand side.

“In Rain, Road and Sport, the semi active element in the suspension is just braking support. So if you do a massive front end brake for a corner, the suspension ECU intercedes to control the amount of dive that you’re inflicting on the suspension, and it will instantaneously, within 0.2 of a second, wind in compression damping at the front, depending on how aggressive your braking is. This can be determined from the brake pressure, but also from the IMU, so it measures the pitch of the bike. So it can add extra front compression damping, which immediately supports the dive, it also puts rear rebound damping, which stops the back end lifting. 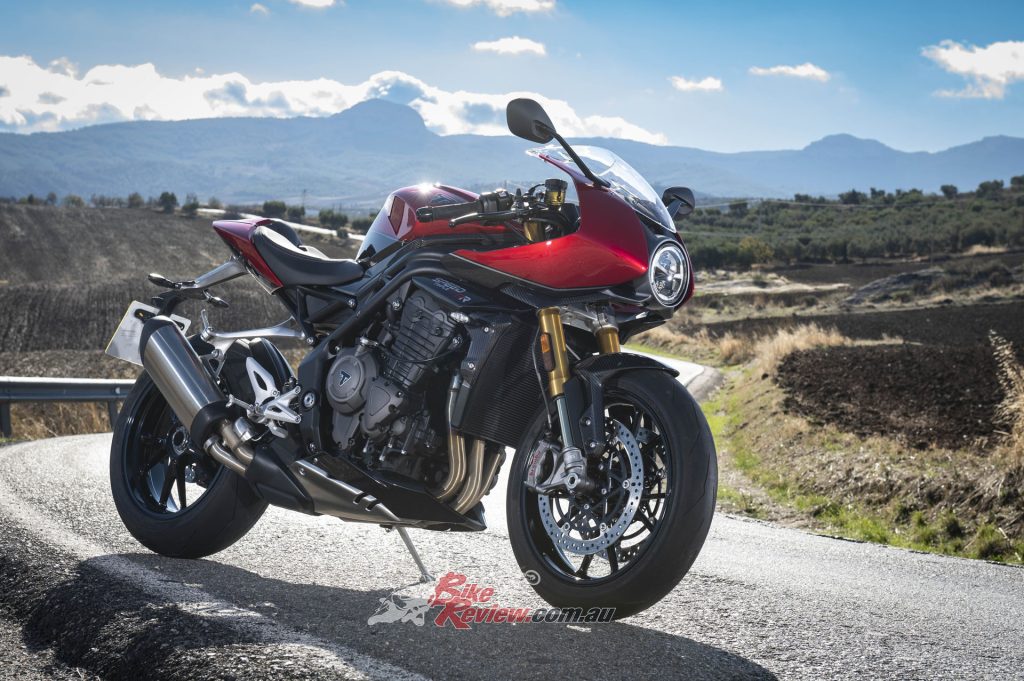 “In Rain, Road and Sport, the semi active element in the suspension is just braking support.”

“Now, all the damping will do is reduce the rate of movement – it doesn’t stop it. Damping is a velocity based phenomenon, so it changes with velocity. So you will slow down the rate of pitch with more damping, but at some point, you will be at full pitch, and actually, you’ll want your wheel control for your braking, it’ll be backing off the compression damping at the front, backing off the rebound damping at the rear. The bike will sense that you’re pitching into the corner, because it’s measuring lean angle, and you’re pitching in while you’re still on the brakes. 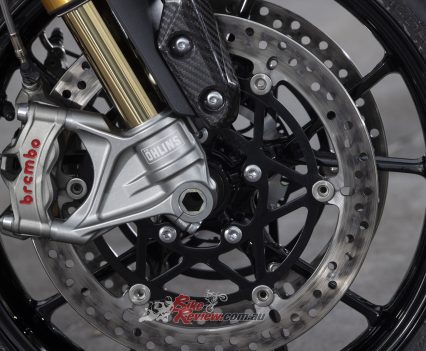 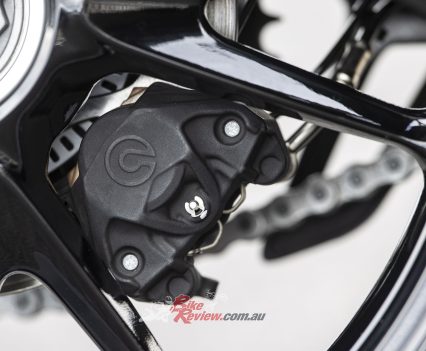 “At some point you’ll release the brakes, but all this time, these are sections of the corner that are defined by Ohlins, and have Ohlins suspension settings. So the initial braking, full power braking, pitching into the corner, releasing the brake and constant brake corner, and then opening the throttle and driving out of the corner, and then back into a straight line. It monitors all that, and it can change everything within 0.20 sec, but it would sense quicker than that that something had happened, so it won’t wait 0.20 sec before it does something – it’s starting effectively instantaneously, maybe 0.08 sec at most. 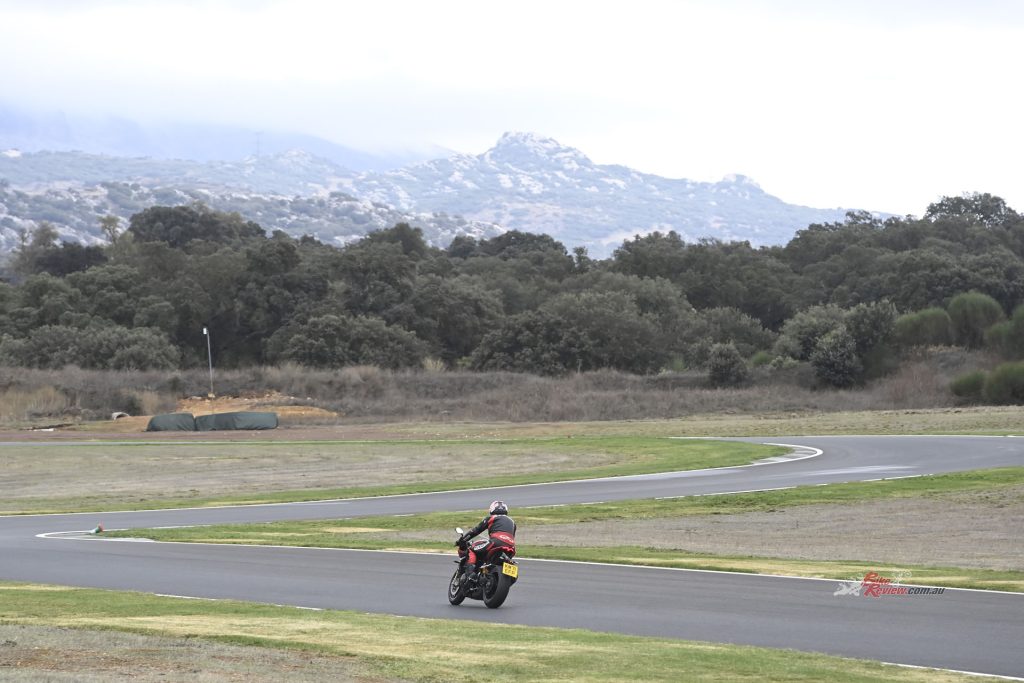 The Ohlins system will apply changes within 0.20 sec, but it senses quicker than that that something had happened, so it won’t wait 0.20 sec before it does something – it’s starting effectively instantaneously, maybe 0.08 sec at most.

“Now, what that does, is allow you to have the suspension doing what you want it to do. When you’re riding in a straight line, or just riding at moderate angles of lean in Road mode, what it gives you is a suspension system that we haven’t had to tune to give that brake dive support, or the squat support under acceleration, so it’ll be incredibly comfortable. You’ve effectively got relatively soft suspension until you need it to stiffen up, and in addition to those inputs, you’re also measuring speed. So as you go faster, from about 14kph, it starts to increase damping, because any bump you hit, if you hit it faster, there’s more energy, and you then need more suspension to absorb that energy. 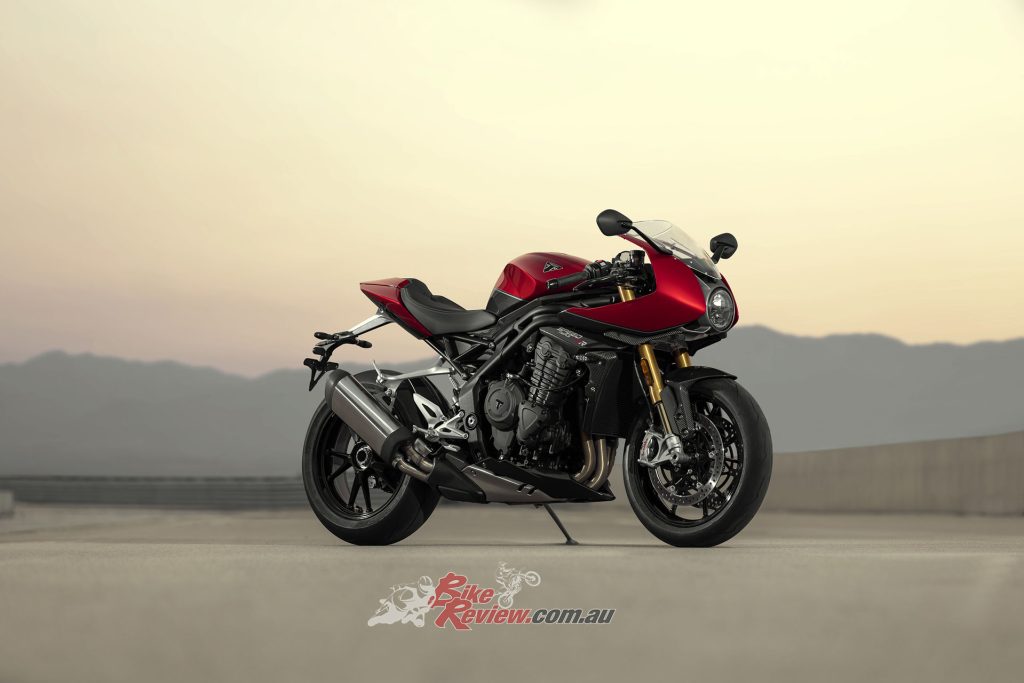 The technology we were only seeing on top level MotoGP and WSBK bikes can be found on bikes such as the 1200 RR.

“So at higher speeds, you wouldn’t perceive stiffer damping as being uncomfortable, it would be necessary. It’s an incredibly complete system, that’s been really well thought out, and the point for us with the Speed Triple RR is that we can choose a really comfortable but controlled suspension setup for the road, and then for extreme use, have full Superbike level of control, all at the press of a button. It’s measuring what you’re doing, and giving you the outcome you need”. 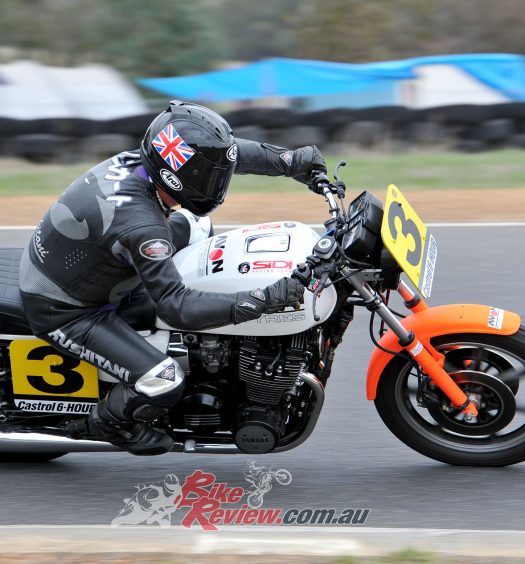 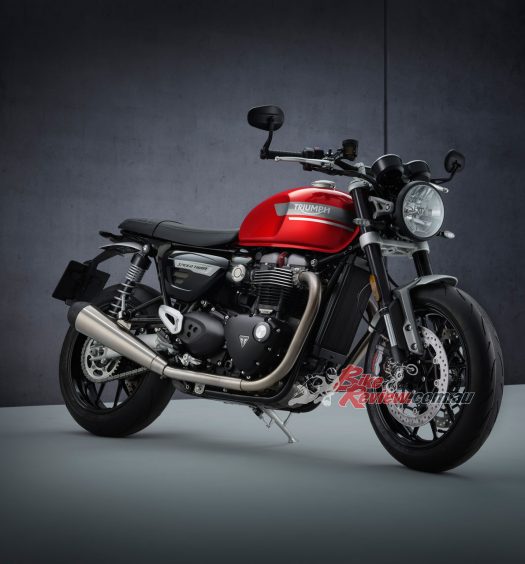