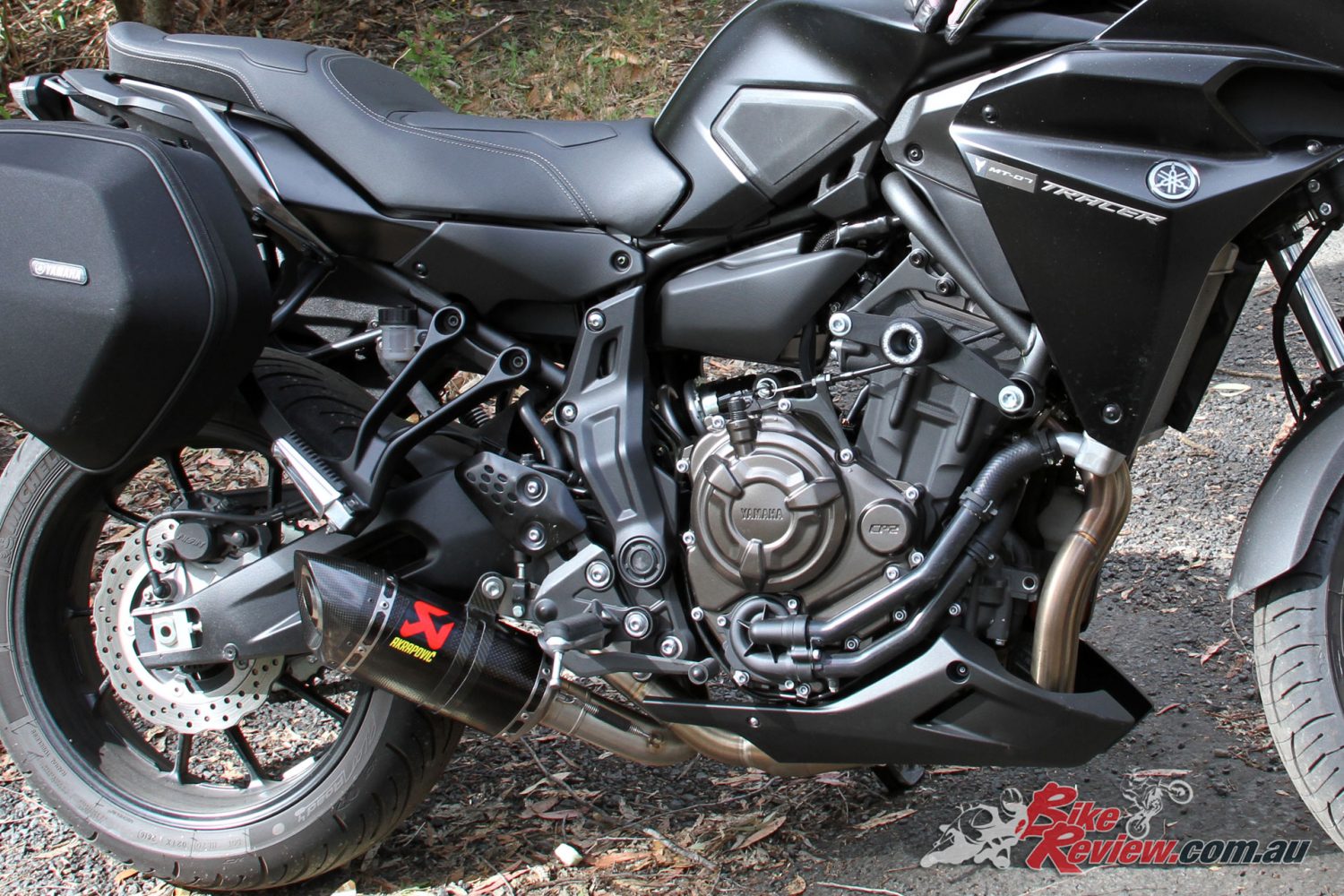 Kris heads to Sydney Dyno to run the Tracer 700 after fitting the Akrapovic Race System...

Last installment we fitted our MT-07 Tracer with a Akrapovic Carbon Race Line full exhaust system, which is available from Yamaha YShop (or your local Yamaha dealer), and now we’ll take a look how the overall system meets our expectations.

The MT-07 Tracer is quite loud mechanically, something that fitting a DNA Airfilter and Airbox Lid further highlighted. With the Akrapovic exhaust fitted the bike is considerably louder at idle with a real bark in the mid-range on quick throttle openings. It’s iconically a twin, but ear plugs are appreciated now for longer rides. It’s not obnoxiously loud, although this is obviously subjective, and we like loud exhausts here at Bike Review – within reason of course. 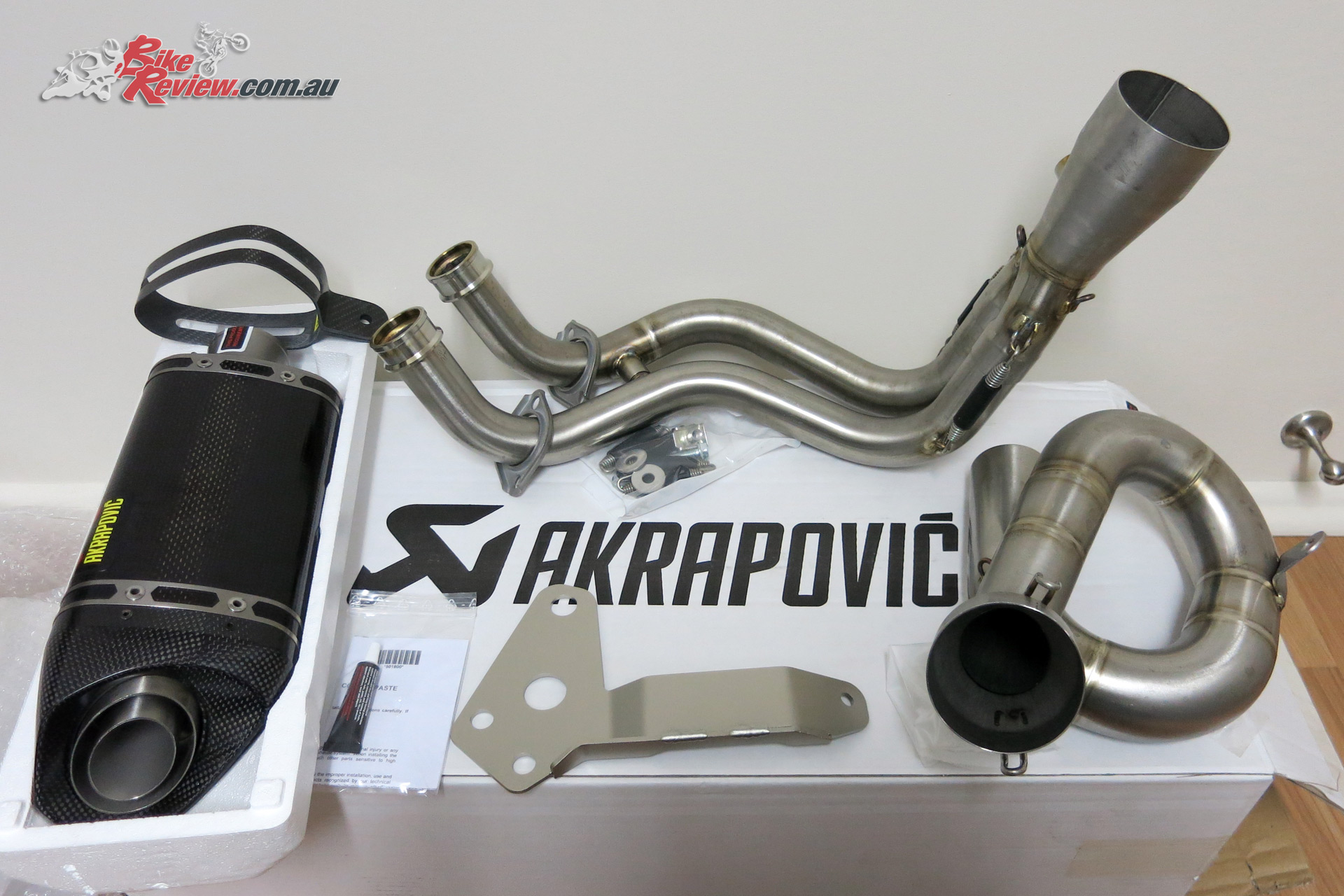 Build quality and fitment as noted in the installation guide is top notch as you’d expect from Akrapovic, and fitted to the bike the system looks the business, from the headers back through to the carbon-fibre muffler. Sure it’s partially hidden away with the low mount, but there’s a signifcant benefit from a weight centralisation perspective when doing that. 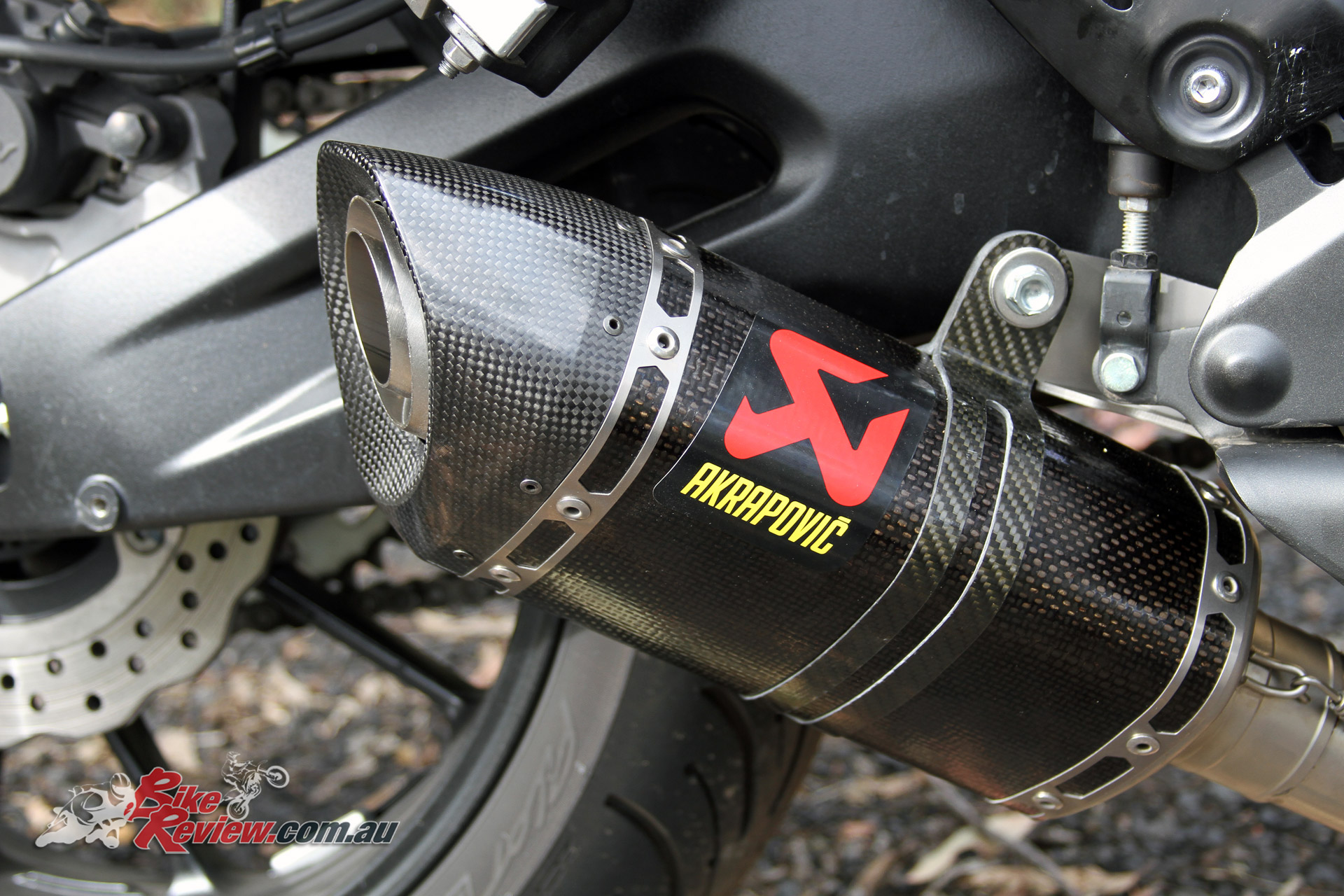 On the highway the Akrapovic exhaust is relatively unnoticeable, you don’t hear the exhaust over everything going on, and as you’ll note from the Dyno video, it does flatten out (exhaust note-wise) at higher rpm, like above 7000rpm. The most significant performance gain is also in the mid-range where you spend all your time on the road anyway, which mirrors the performance gain from the DNA airfilter mods. 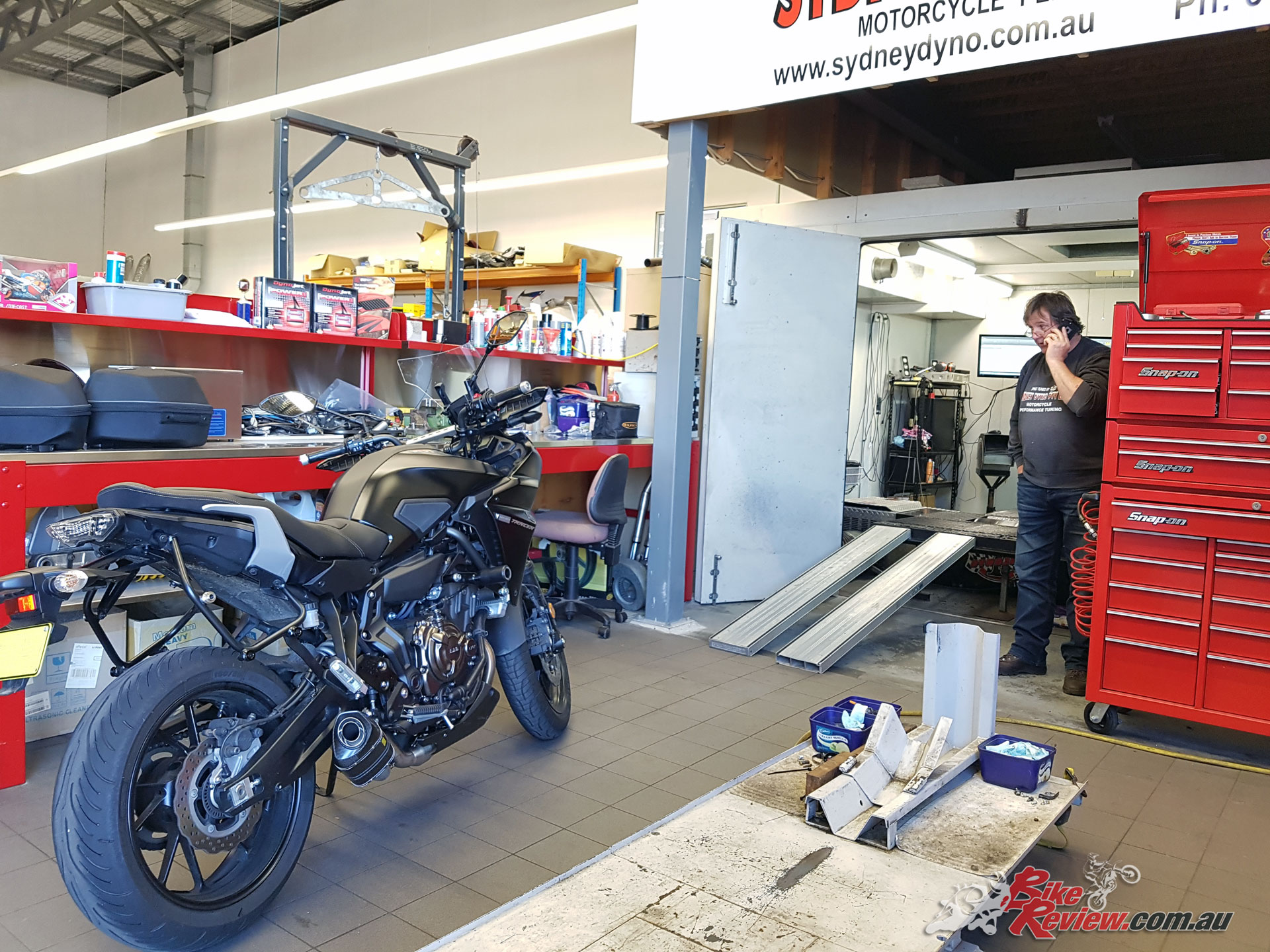 Heading to Sydney Dyno we find torque peaks nice and early but has a much stronger and more linear curve, particularly between 2000 and 3500rpm, as well as 5000 and 7000rpm, as you’ll see from the attached Dyno graph. There’s also a pretty significant top end gain just before hitting red-line, although how often you’ll be able to take advantage of that on the road we don’t know…

Peak figures show a more reasonable one horsepower gain at 7500rpm, with half a foot-pound of torqued gained slightly higher in the rev range – 4600 rather than 4250rpm. At 5600rpm however you’re looking at a 2.3hp gain, and a 2.1ft-lbs gain, keeping in mind this is not tuned or reflashed for this exhaust. We’ve just installed it, and it’s running the standard map from Yamaha, for the LAMS compliant MT-07 Tracer. 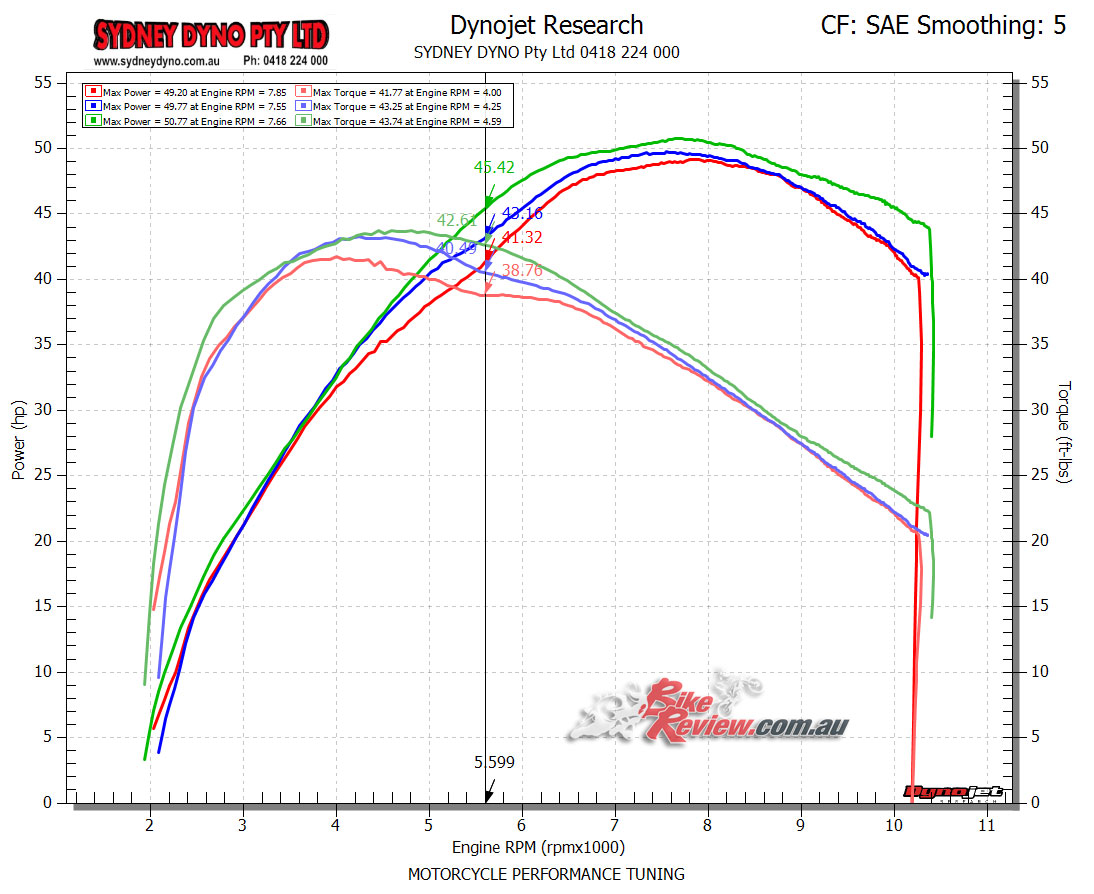 The mid-range gains here are pretty impressive. The green lines are the Akrapovic torque and hp. Blue is just the DNA airfilter and airbox lid mod, and the red lines are stock. Click image for full magnification.

Is there a noticeable difference? Well the bike certainly feels faster taking off, the extra torque from 2000 to 3500rpm makes a difference right where you need it around town. And from 4000-7000rpm there is a fair bit more punch as well. Power-wise from 4000-10,200rpm the bike pulls a bit harder and revs freely, but being louder it can be hard to really quantify that feeling, as it’ll make you feel faster, regardless of the truth. It is however corroborated by the dyno figures. Low down throttle response is definitely a little harsher, but once tuned it will be fantastic. A heavier than previously blip of the throttle on downshifts keeps everything smooth for now. 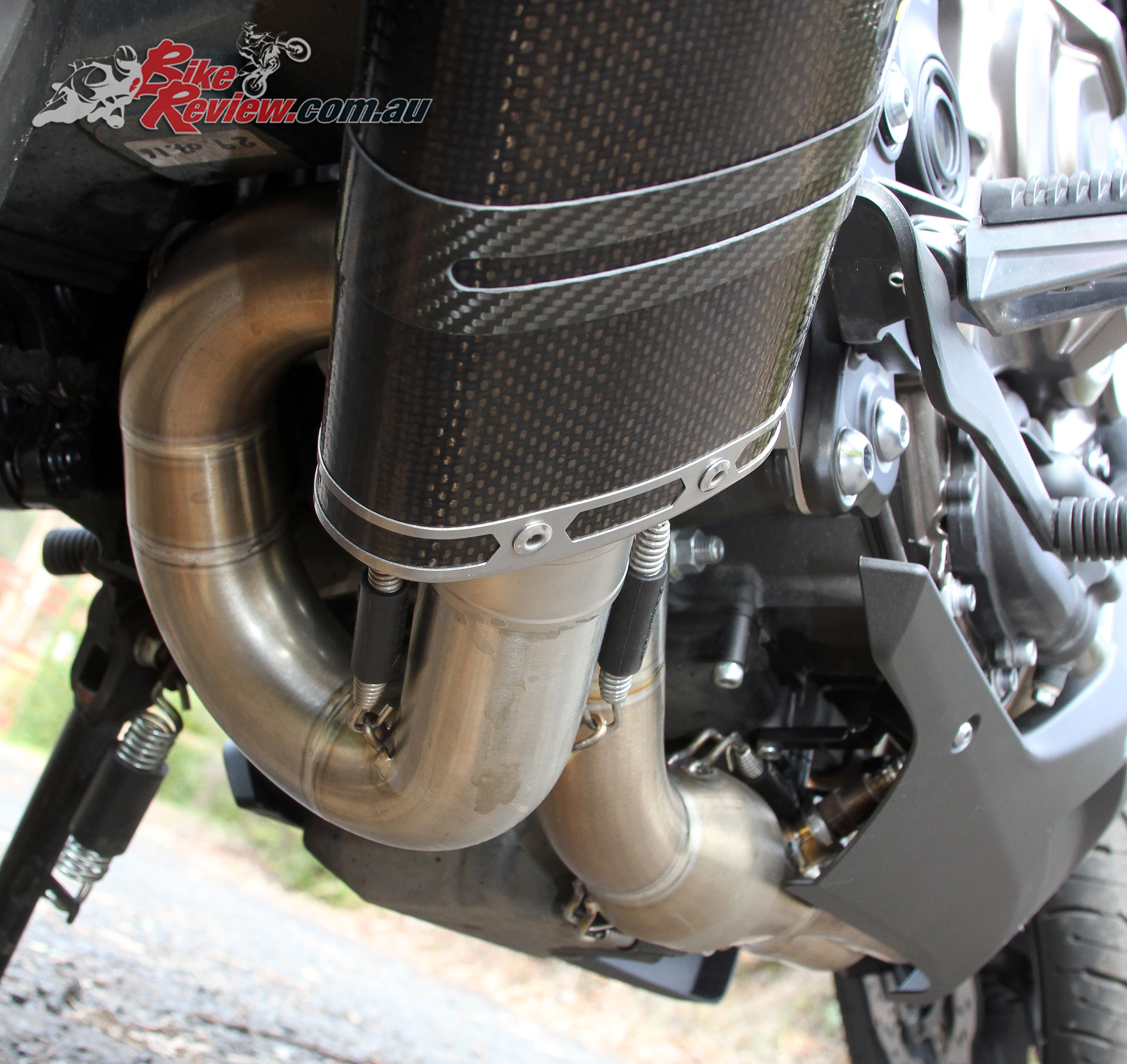 The weight reduction is considerable, thanks to removing the large collector and cat

The 4kg stripped off the bike is a huge plus, that is a lot of weight in the center of the bike, giving just as much advantage as more power, if not more advantage in the twisties. 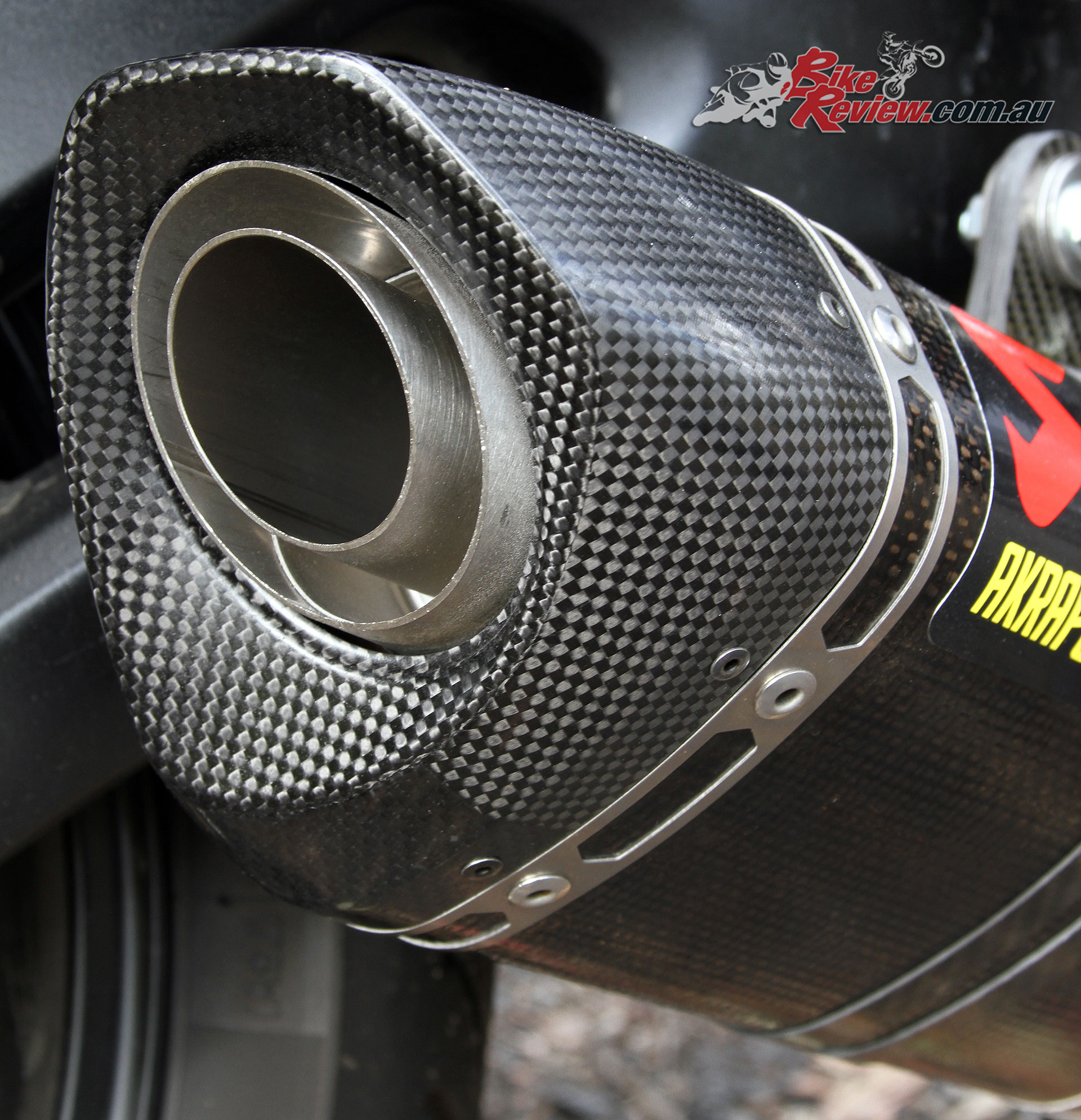 A removable bung is well integrated into the exhaust, for easy fitment and removal. We’ve left it in for now. A retaining bolt on the bike side of the muffler is well hidden with a rubber cap

Now the Akrapovic Carbon Racing Line Exhaust System comes in at $1,022.59, but keep in mind that is a full stainless steel system with Carbon-fibre muffler, and we’re talking Akrapovic build quality. For a full system that is good value, and it does include an exhaust bung which we’ve currently got fitted so they don’t lock us up.

Great system at a good price. 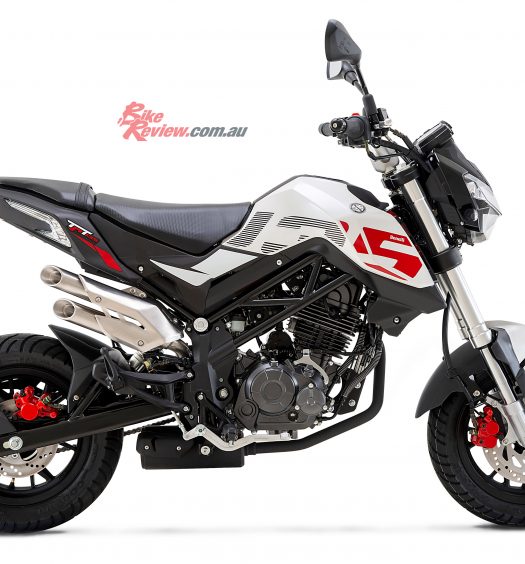 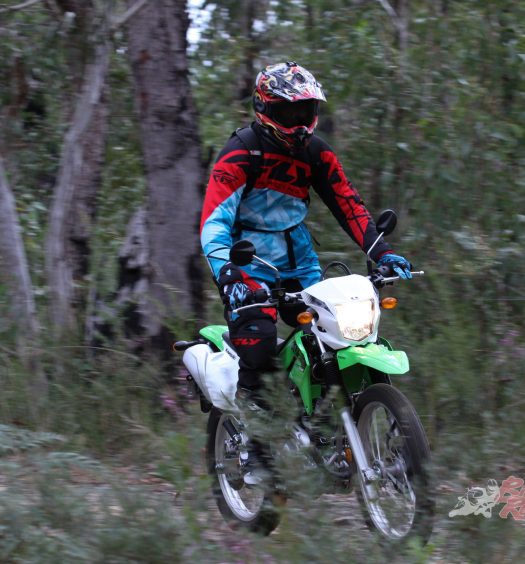