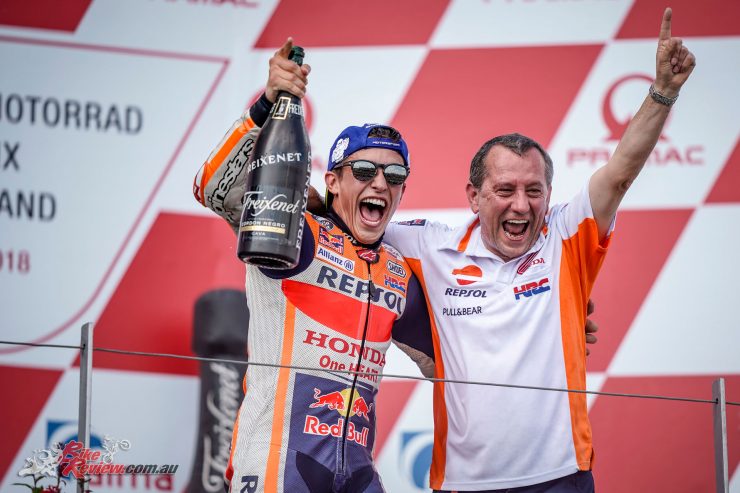 Marc Marquez (Repsol Honda Team) has re-written another piece of history in the Pramac Motorrad Grand Prix Deutschland, storming the Sachsenring from a ninth pole in a row to take his ninth win in a row across all classes. 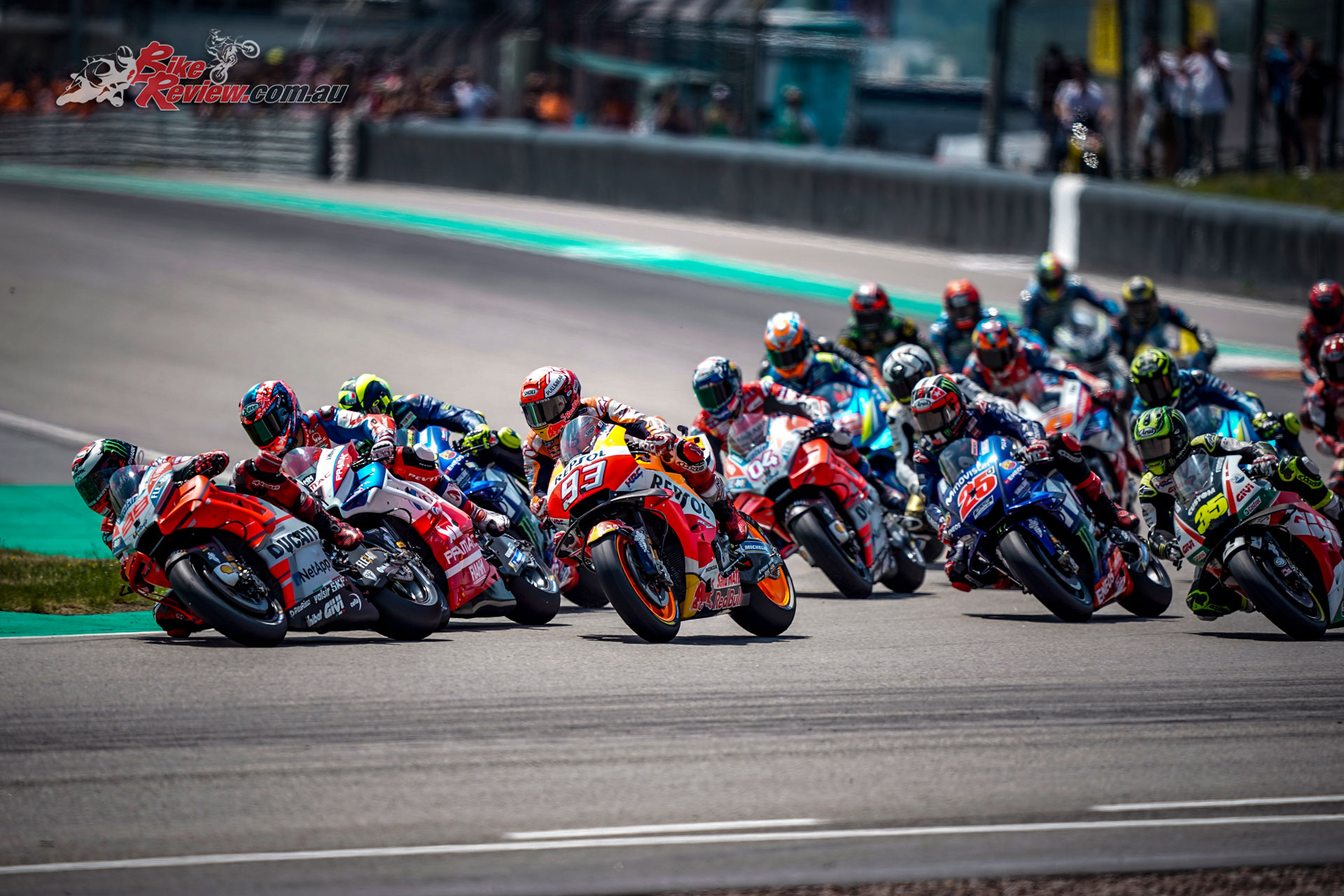 Valentino Rossi (Movistar Yamaha MotoG) took second and maintains his second place in the standings after an impressive bounce back after a tough Friday at the track, with the podium completed by teammate Maverick Viñales.

At lights out it was Jorge Lorenzo (Ducati Team) who got the holeshot from pole, moving from third into the lead as Danilo Petrucci (Alma Pramac Racing) slotted into second – with Marquez shuffled back into third. Rossi made a good start from sixth to move into fourth ahead of teammate Viñales, with Andrea Dovizioso (Ducati Team) the key man to lose out from fifth.

Once at the front, Lorenzo set about putting the hammer down, making it the sixth race in succession the Mallorcan has led. It didn’t take too long for Marquez to make his way through to be the man behind his compatriot, however, and a game of cat and mouse began at the front as Marquez reeled in the rhythm ahead of him. 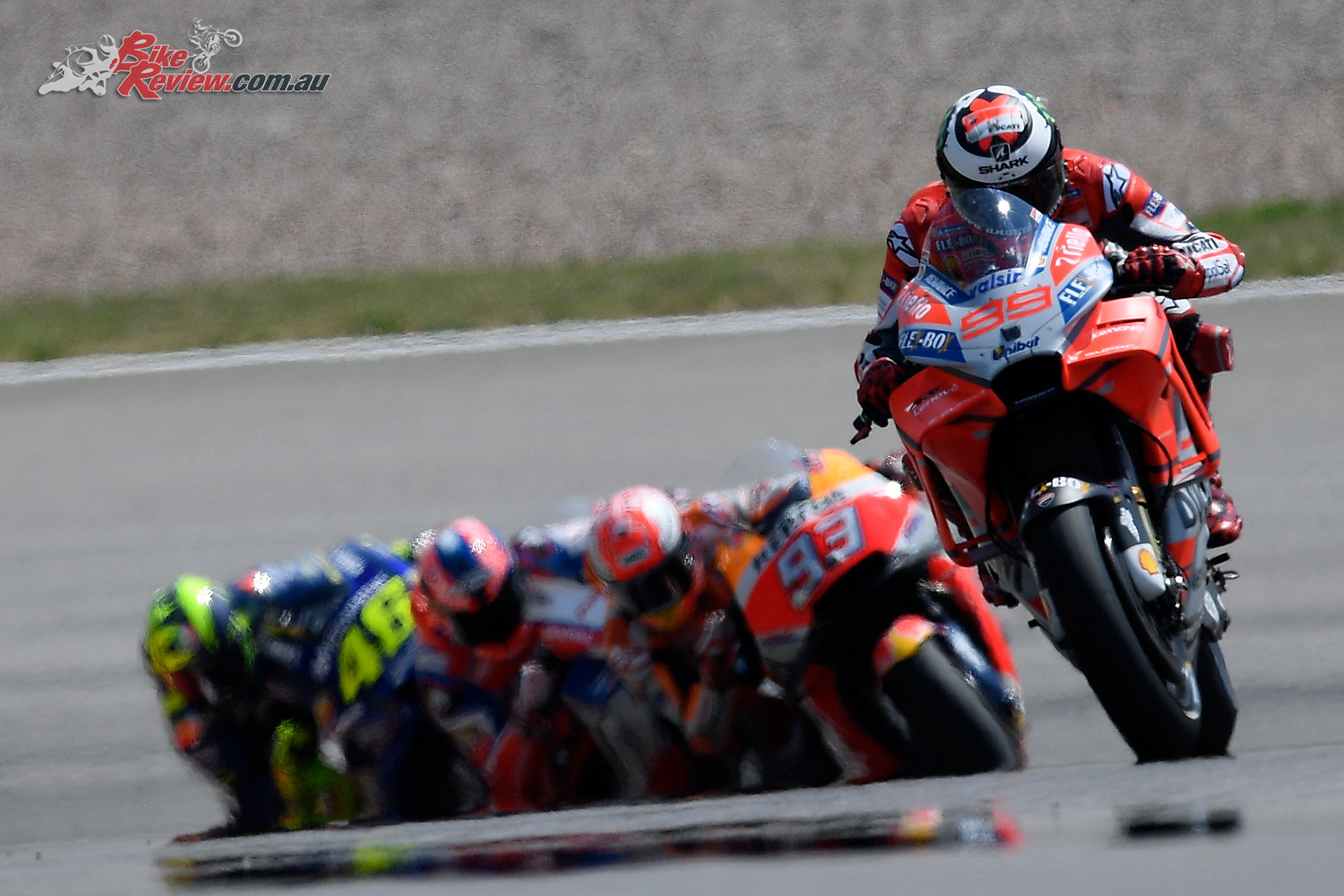 Meanwhile Rossi attacked Petrucci for third and moved through, as Cal Crutchlow (LCR Honda Castrol) then crashed out at Turn 12, the Brit’s say in the podium fight over early. Lorenzo was holding firm at the front, but Marquez then chose his moment and struck – taking over in the lead and leaving Lorenzo to be reeled in by Rossi.

That the Italian did, and the rider from Tavullia got his own hammer down once past to try and claw back some time to Marquez, but it wasn’t to be. The number 93 pulled the pin with perfect timing, with enough grip left to see him make a gap and keep it until crossing the line for stunning ninth win in a row at the Sachsenring – and all from pole. 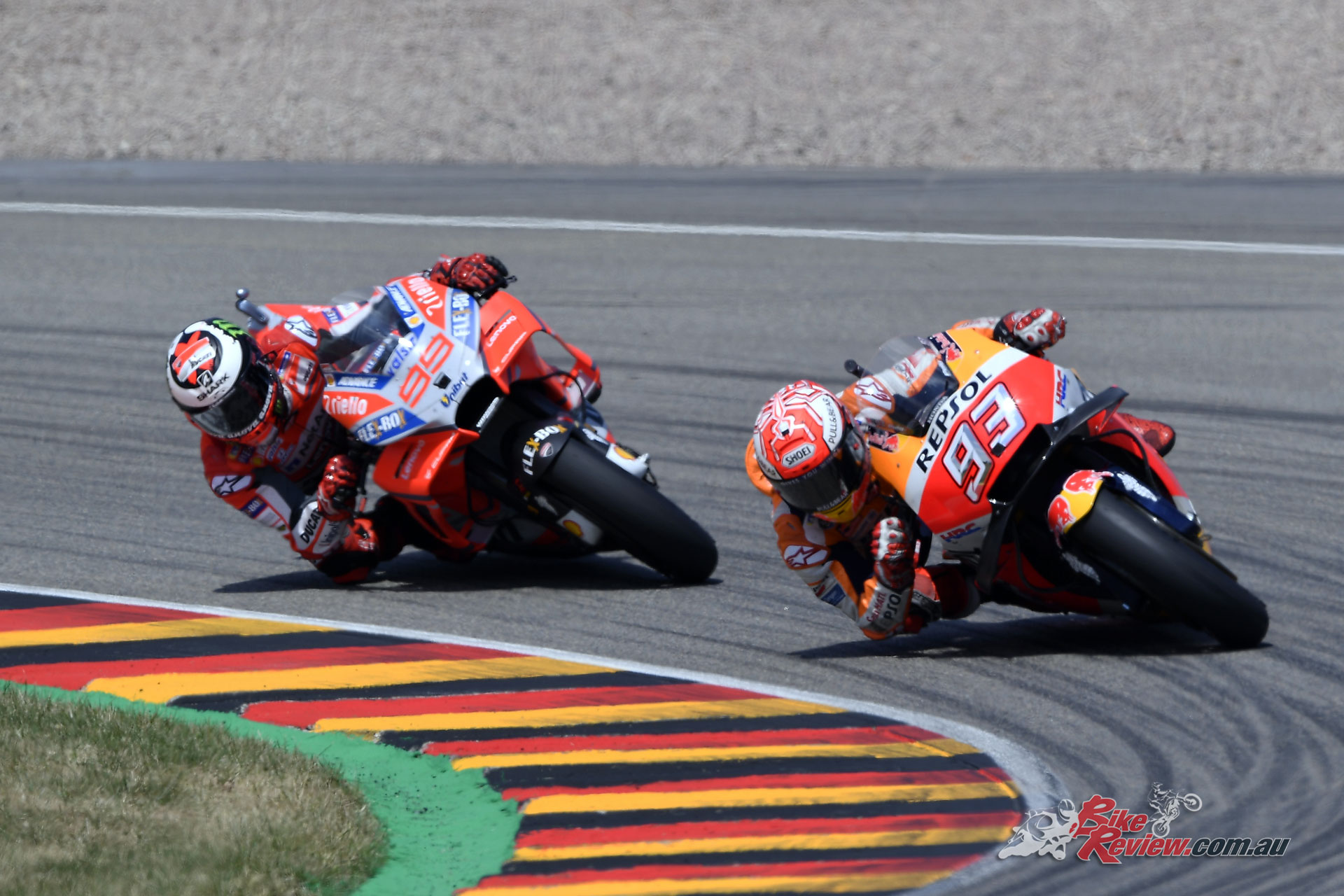 Marc Marquez “Of course I’m very happy, as nine wins in a row here is incredible! But every year the pressure increases, because beginning on Thursday, everyone starts asking about winning on Sunday! I expected that Lorenzo might pass me but not Petrucci. I lost two positions and then overtaking them wasn’t easy. When I did it, I started to push in order to pull a gap but without being ‘crazy’ so that I could manage the tyre consumption until the end of the race. But then they signalled me that Valentino was closing in very fast, and when I saw 0.6 in the board I understood that I had to push again and completely use my tyres for two or three laps, so I did my fastest lap of the race. I was able to open a gap again and then manage it. Then, when I was celebrating I saw a marshal with a No. 26 cap, so I took it and went to celebrate in front of the fans because I think this weekend Dani was the protagonist, and we’ll miss him. We and Honda are working very well and we need to continue like this in the second part of the Championship with the same feeling we’ve had so far.”

Rossi was then safe in second for another podium finish, but teammate Viñales left it late to complete the rostrum. First Petrucci was the man pushing to pass a Lorenzo struggling with grip, before Viñales arrived on the scene and attacked the Mallorcan and then the Italian to take third and a second successive podium.

Valentino Rossi saying, “Usually Sachsenring is a difficult track for the M1, but today we were able to get a double podium, so we’re very happy, also about the work of the team. I‘m so happy because I did a fantastic race from the beginning, I never made a mistake. Last week, I rewatched the race from last year and I said to myself “Folger was good with the Yamaha, so we have to do the same!” In the end I got the same position as he did, so I‘m happy and it‘s a great way to start the holiday.” 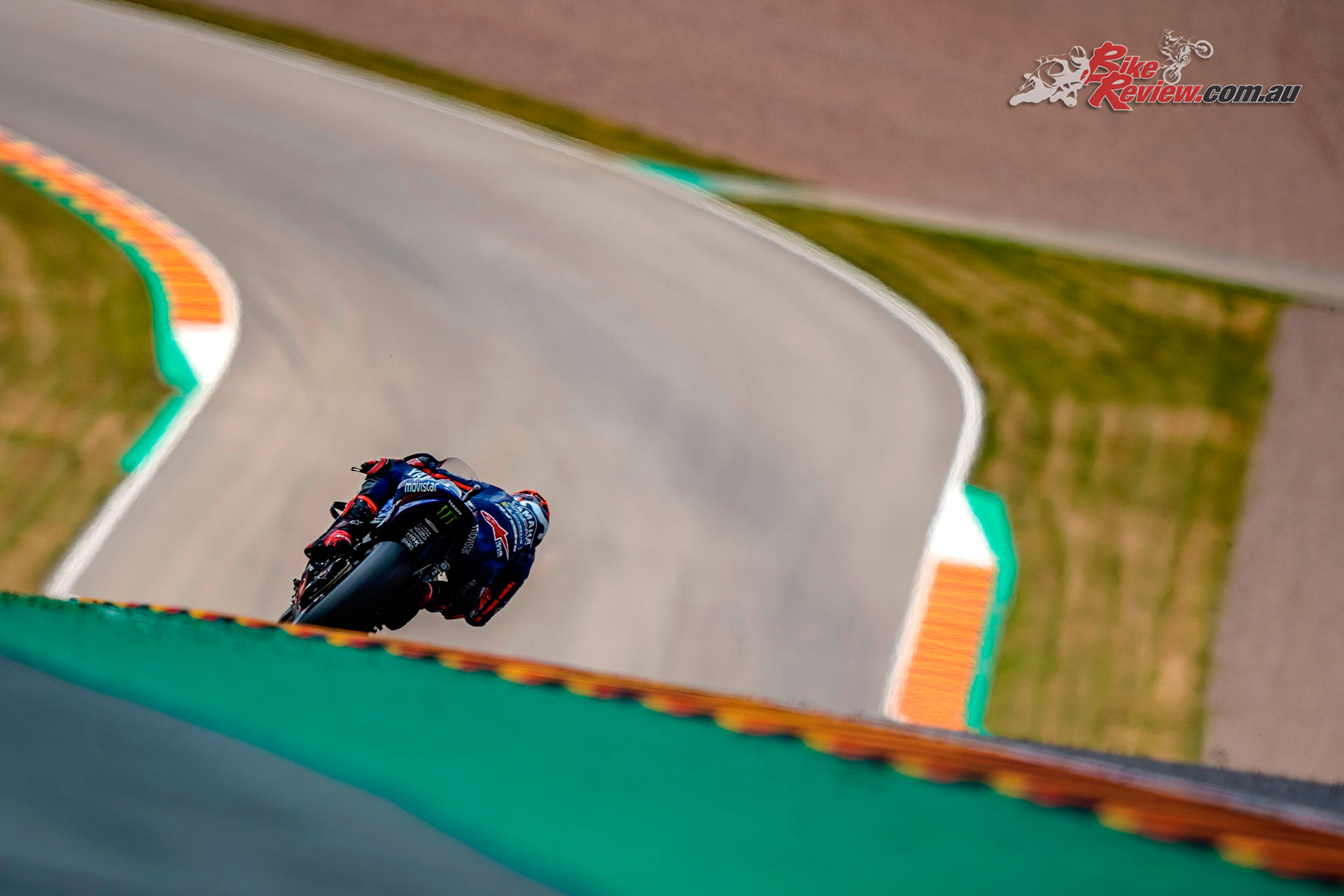 Maverick Vinales adding, “It was a tough race, honestly, but I feel happy because I think we worked well throughout the whole weekend and I think we did a good job. With the team we worked hard on the last ten laps of the race, which were the most important. I think we were one of the strongest at the end of the race, but there are still things for us to improve, also on myself. It’s good to have a break right now, to give us some time to work hard and try to improve the bike. It was almost impossible to overtake today. I tried, but I was going wide everywhere. Outside, inside, I tried everything! When the tyres started to drop I was overtaking everyone in corner 8, closing my eyes, going downhill, full gas. I gave everything, and the bike was working well. I was doing some 1’21.8s or 1’21.9s and this was the race pace that I was expecting. Honestly, congratulations to the team. We’re making the steps little by little and we just have to keep working.”

That made Petrucci top Independent Team rider in a well-fought fourth, just ahead of Alvaro Bautista (Angel Nieto Team)’s stunning ride to fifth. Bautista was the fastest man on track for a good number of laps and kept that incredible form to the end, the final man able to muscle past Lorenzo by the flag. 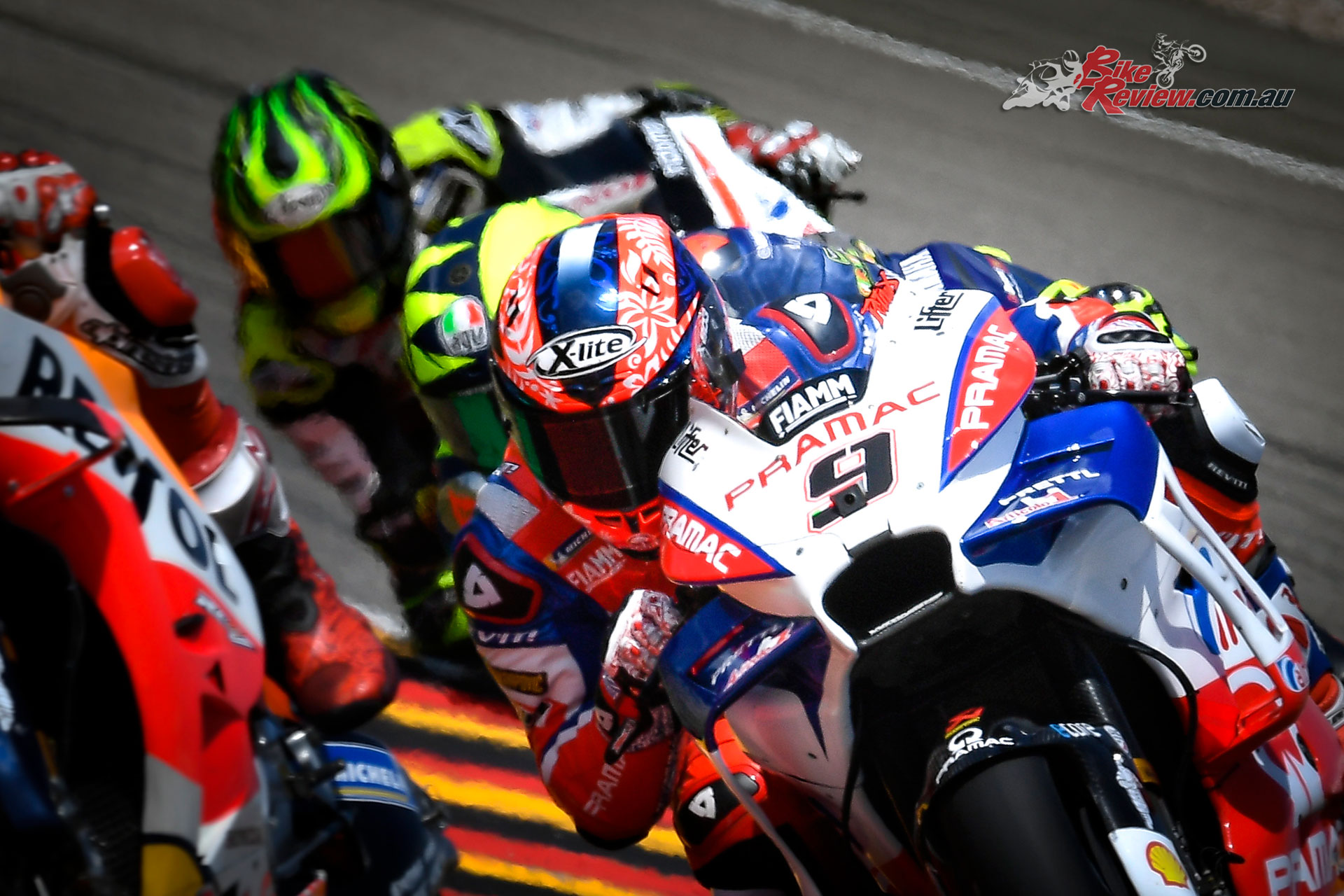 Lorenzo took P6 ahead of a tough day for teammate Andrea Dovizioso, with Dani Pedrosa (Repsol Honda Team) putting in a solid ride to eighth. Johann Zarco (Monster Yamaha Tech 3) improved from his worst qualifying of the season so far to take ninth despite the difficult weekend, with an incredible ride from Bradley Smith (Red Bull KTM Factory Racing) putting the Brit in tenth to take KTM’s first top ten of the season. 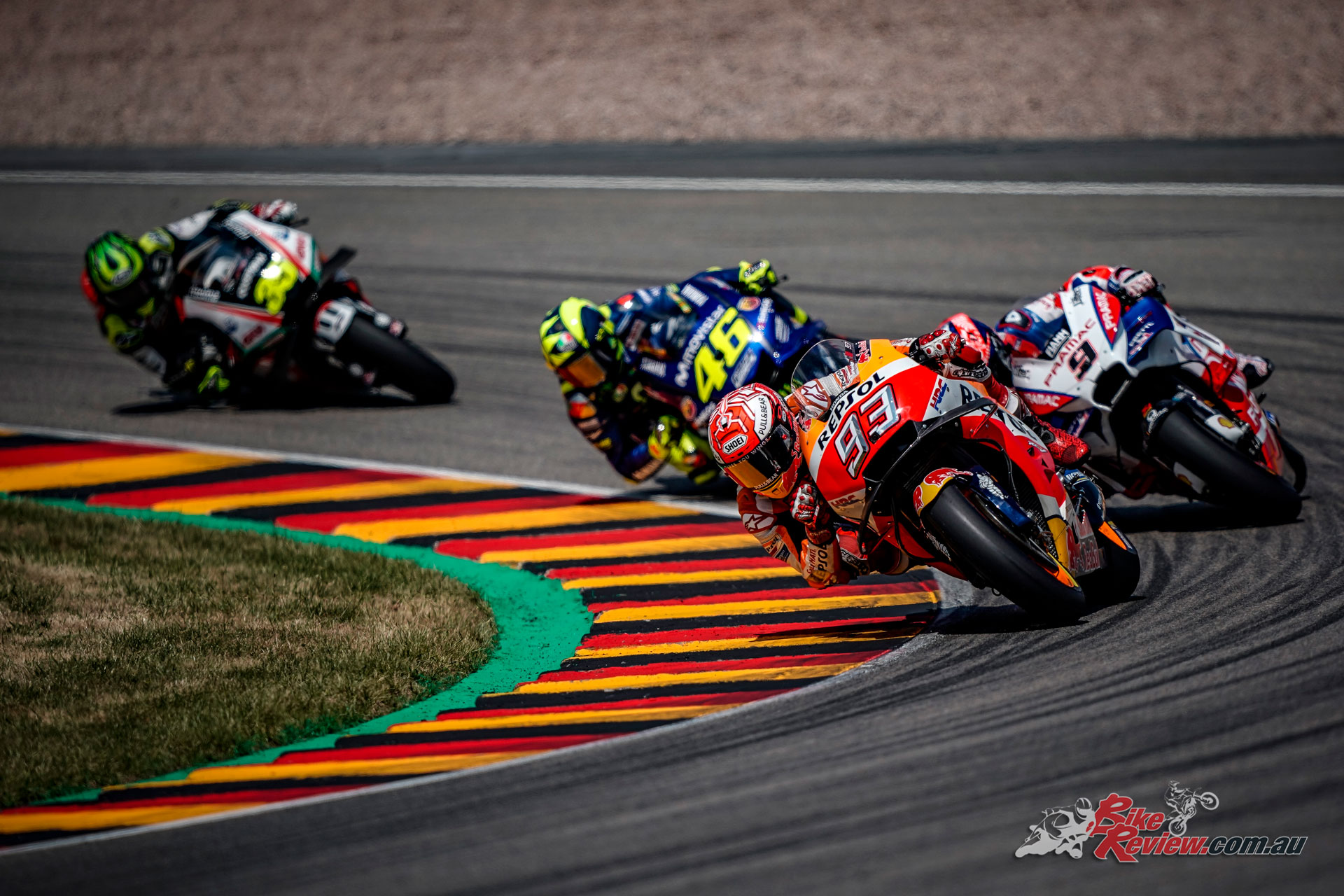 Hafizh Syahrin (Monster Yamaha Tech 3) was top rookie in eleventh and takes over at the top of the Rookie of the Year standings, ahead of Andrea Iannone (Team Suzuki Ecstar), who was caught in an early incident that saw Pol Espargaro (Red Bull KTM Factory Racing) make contact with Alex Rins (Team Suzuki Ecstar) and both go down; also affecting Iannone and Jack Miller (Alma Pramac Racing). Miller finished P14, with Tito Rabat (Reale Avintia Racing) between him and Iannone. Scott Redding (Aprilia Racing Team Gresini) completed the points. 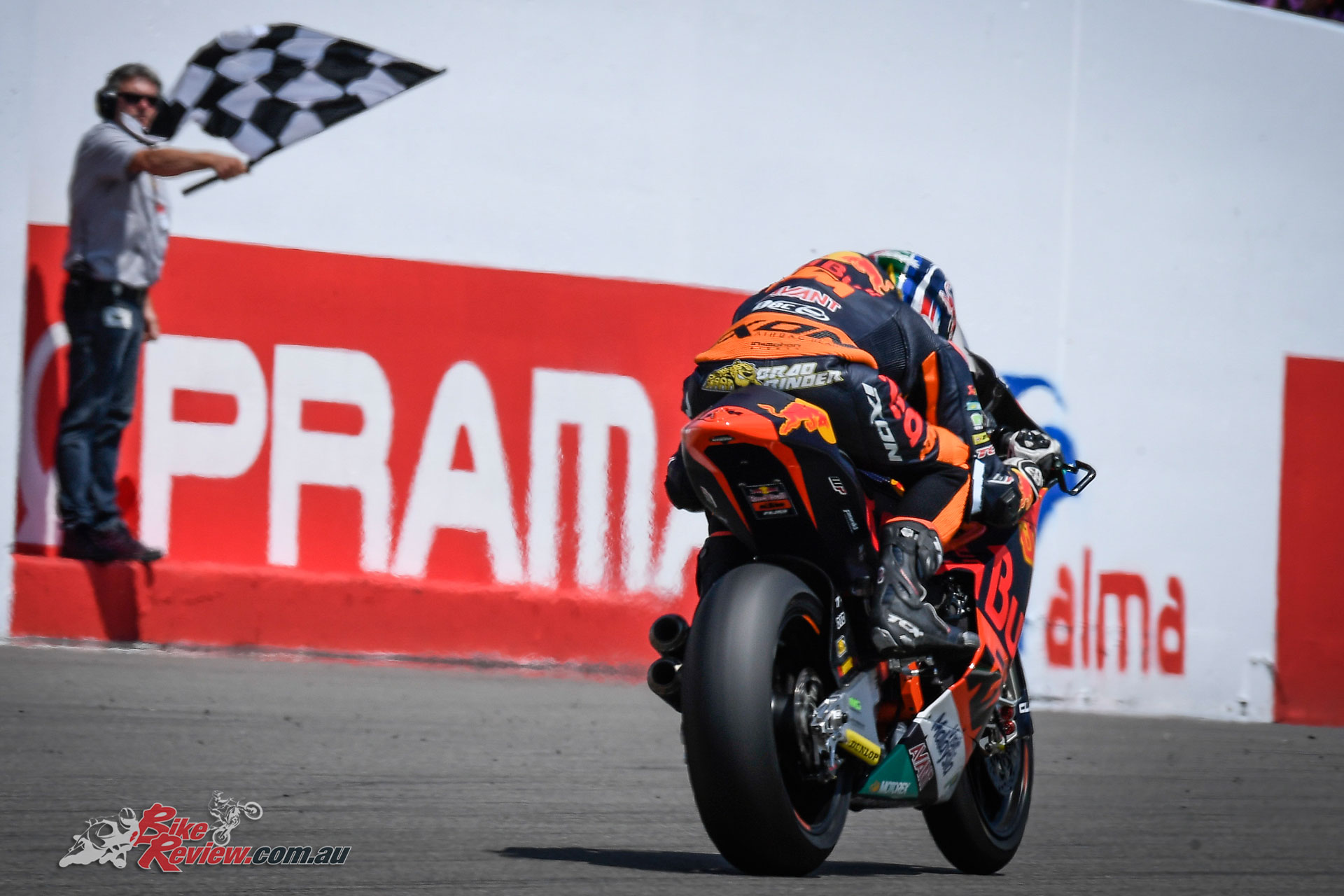 The opening stages of the Moto2 race where chaotic. First, Miguel Oliveria (Red Bull KTM Ajo) had a moment on the last corner of the opening lap, luckily staying on after getting out of shape – making contact with the helpless Xavi Vierge (Dynavolt Intact GP) as he tried to pass.

Then a lap later, Mattia Pasini (Italtrans Racing Team) crashed out of P2 at the same corner, with Championship leader Francesco Bagnaia (SKY Racing Team VR46) having to take avoiding action, running into the gravel and dropping down to 26th. The drama wasn’t over, with Lorenzo Baldassarri (Pons HP40) highsiding out of contention at T2 on lap three, leaving Marini, Mir and Binder at the front.

The Italian held station at the front, before Mir went up the inside at Turn 1 to take the lead of the race. Five laps later, Binder then made his move, first getting past Marini at Turn 1 before slicing his way through on race leader Mir at the bottom of the Ralf Waldmann corner.

The South African wasn’t able to create a gap, but his lap 10 move proved to be the race winning overtake, with Binder looking like he was on rails around the Sachsenring as he eventually claimed victory by 0.779 seconds, with 0.154 splitting Mir and Marini in P2 and P3.

Further back, Oliveira had re-grouped and got himself up to fourth after passing Sam Lowes (Swiss Innovative Investors) and home rider Marcel Schroetter (Dynavolt Intact GP). The Portuguese rider couldn’t bridge the gap to the front three though and settled for P4, with Lowes getting the better of Schroetter on the last lap to claim his best result of the season in fifth – the German sixth at his home Grand Prix.

So, it was a magnificent maiden Moto2 victory for Binder, while the Championship pendulum swings again with Oliveira cutting the gap to Bagnaia as the paddock heads for the summer break. 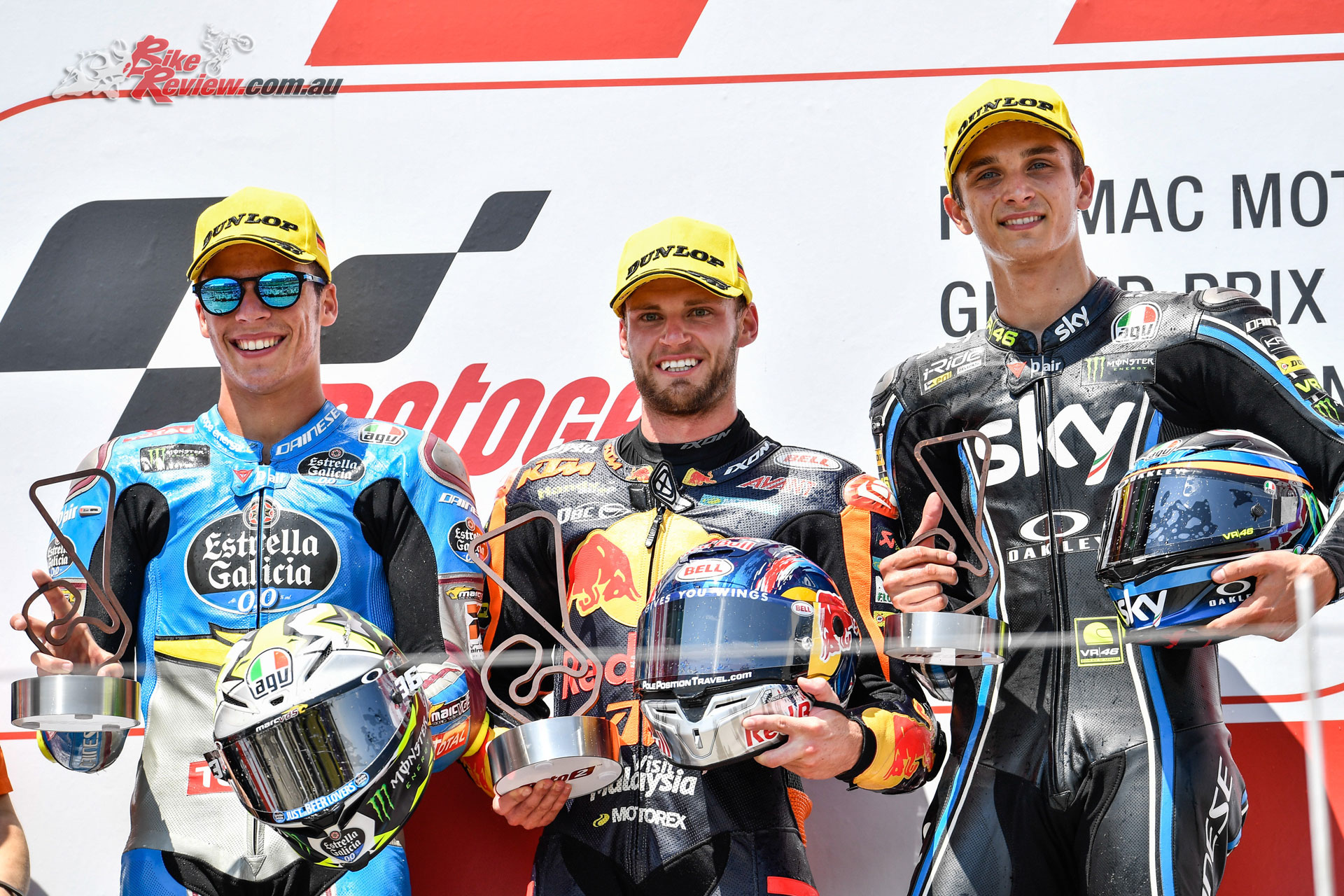 Moto3: Martin pulls the pin to perfection as the standings shuffle

Jorge Martin (Del Conca Gresini Moto3) took a perfectly-timed win in the Pramac Motorrad Grand Prix Deutschland, fighting at the front throughout before pulling the pin to perfection in the latter stages to escape the chasing pack.

It was Championship rival Marco Bezzecchi (Redox PruestelGP) who crossed the line second in some solid damage limitation to keep close in the standings, with John McPhee (CIP – Green Power) putting some recent disappointments to bed as he got back on the podium with an impressive third.

Martin took the holeshot from pole, getting a perfect start as Marcos Ramirez (Bester Capital Dubai) moved up into second and Enea Bastianini (Leopard Racing) suffered off the line to fall back. Ramirez’ teammate Jaume Masia shot past the Italian to take third, with Bezzecchi pouncing early to move up and begin his attack.

From seventh on the grid the Italian was soon on the tail of Martin and the Spaniard was unable to escape in the early stages. But it was a huge train of riders fighting it out at the front, with the group stretching back outside the points and even the top twenty.

With 16 laps to go, Martin’s first little lightning bolt of drama hit as he headed wide into Turn 1 and dropped back to fourth, before another few laps later there was more drama in the same place as teammate Fabio DiGiannantonio (Del Conca Gresini Moto3) crashed and was incredibly close to collecting Martin out the lead – but the Spaniard held on and just headed a little wide.

With seven to go Martin made a break for it, pulling the pin and timing it to perfection as Bezzecchi struggled to hold on to the Honda man ahead of him. Half a second then six tenths then over a second, the gap kept growing – and McPhee hunted down Bezzecchi. Martin crossed the line for the win as Bezzecchi and McPhee dragged it out – and the Italian took it by just half a tenth.

Fernandez was a victim of another key moment of drama in the race, with the Spaniard suffering contact with Lorenzo Dalla Porta (Leopard Racing) and forced wide across the gravel. Getting back on track well outside the top twenty, the Spaniard’s ride back to the top ten was an incredible achievement as he stands in for the injured Darryn Binder.

Dalla Porta’s teammate Enea Bastianini was also protagonist of some drama as the Italian crashed in the latter laps and was collected by Alonso Lopez (Estrella Galicia 0,0), making it a 0 in the title fight for the Italian just ahead of the summer break.

Now it’s time for a couple of weekends off before we reconvene at Brno – and it’s Martin heading into the break with momentum, but Bezzecchi’s very much in touch. 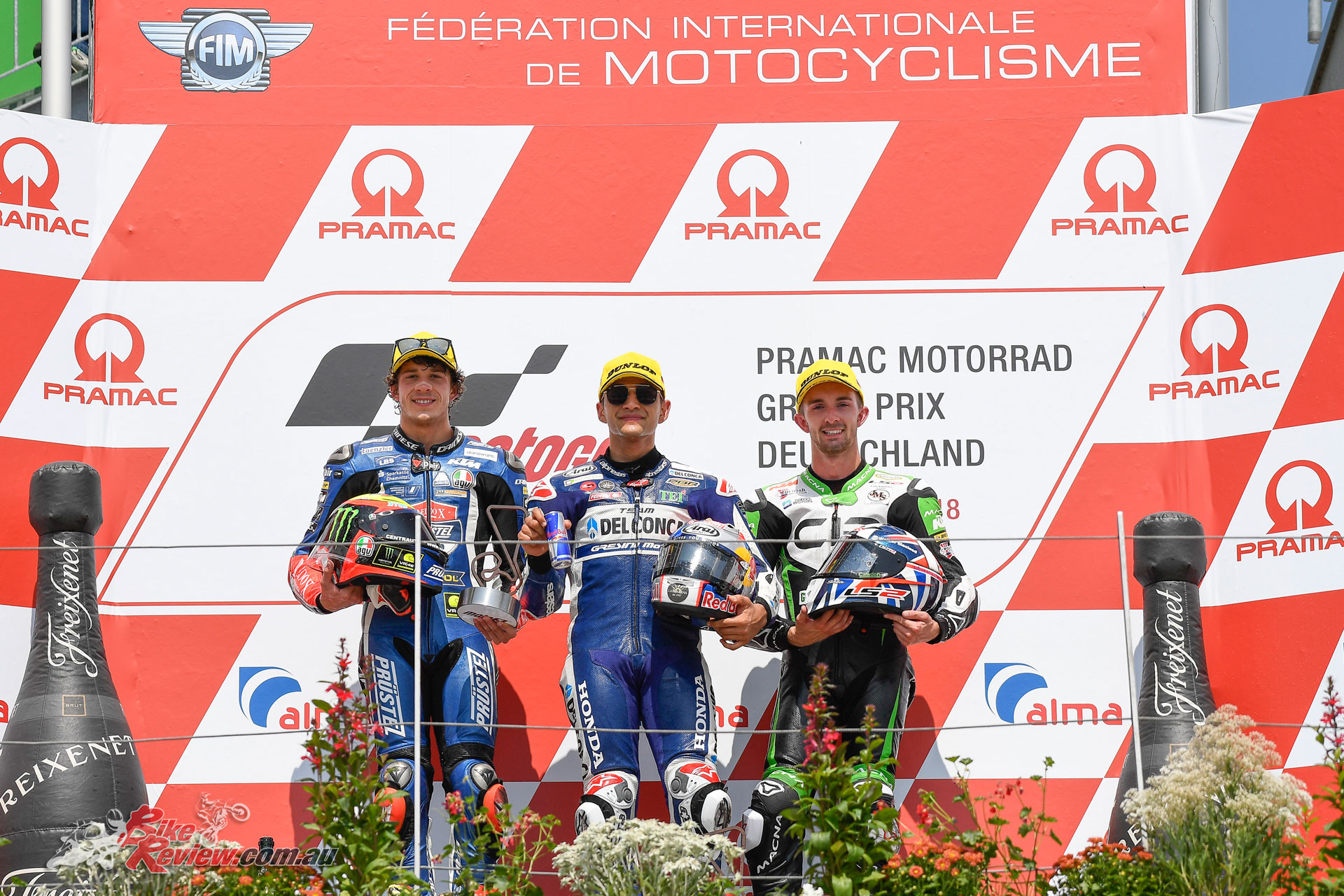