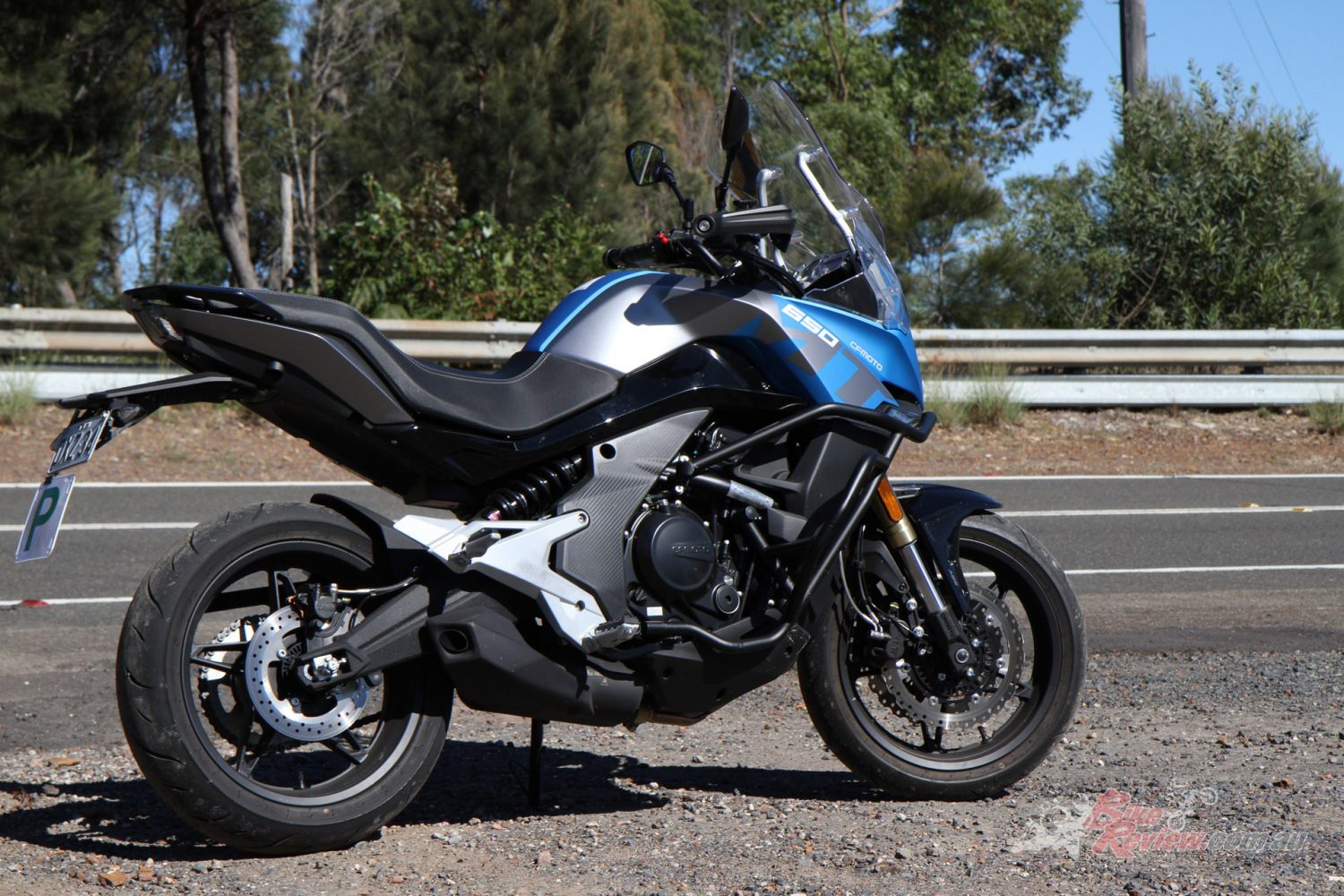 Our long term 2021 CFMOTO 650MT is sitting at just under 2000km and has been a daily rider for Nick on his commute, plus has been used for some awesome weekend fun!

I’ve been enjoying our CFMOTO 650MT since late April and I’m seriously impressed with what it has to offer. So far I’ve mainly been riding it to and from Uni a few times a week (200km) and it has been a blast both on and off the freeway. We just had the first service done as well. 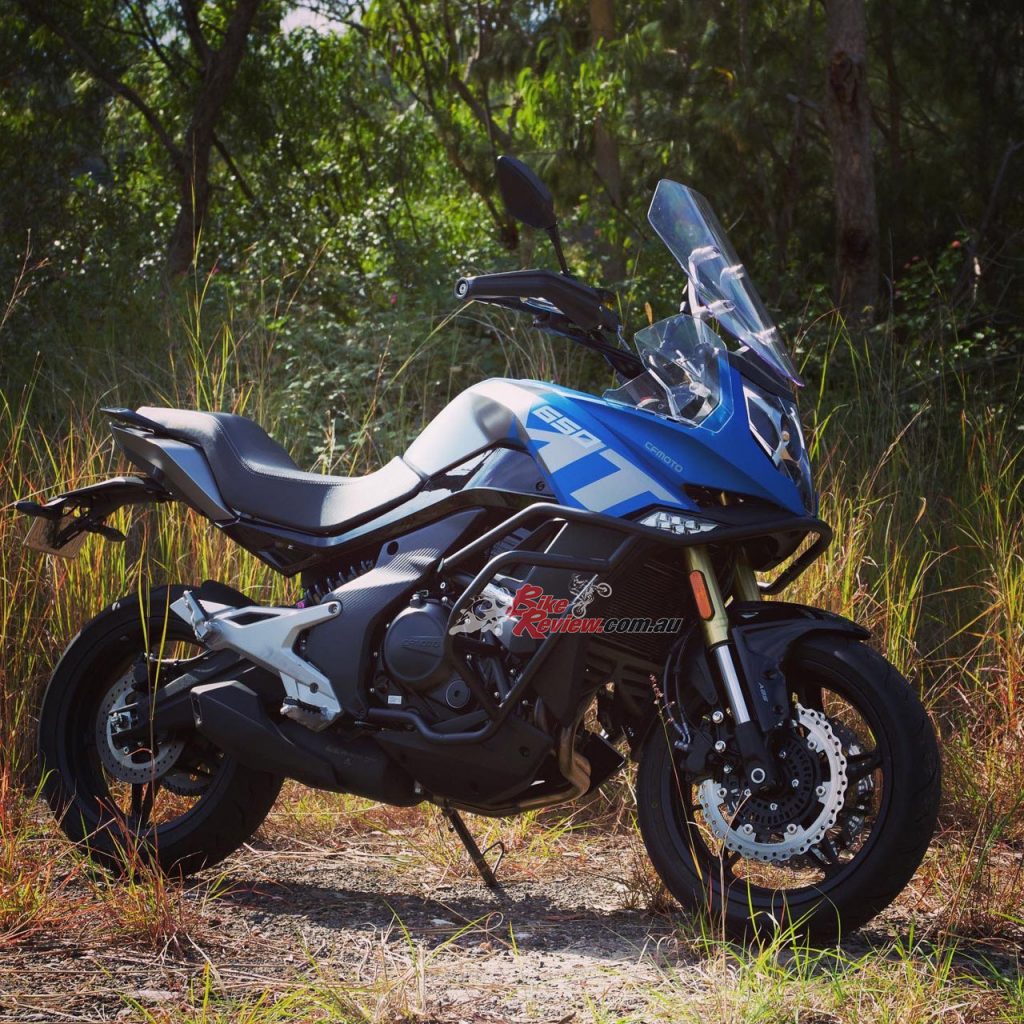 The CFMOTO 650MT has been a fantastic all-rounder for Nick with his 200km commute and recreational riding.

The engine has loosened up over the first 1000km and the gearshifts are much smoother. It has proved super comfortable so far and has done wonders for my lower back after riding a little CBR500 for so long. The upright position, plus wide and tall ‘bars, have been fantastic for me at 197cm tall. 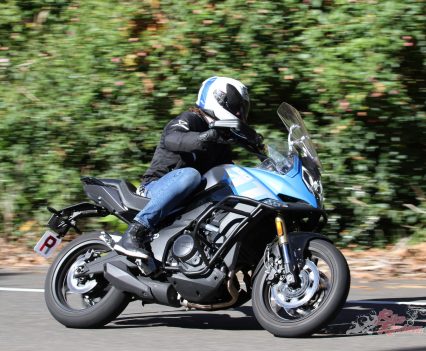 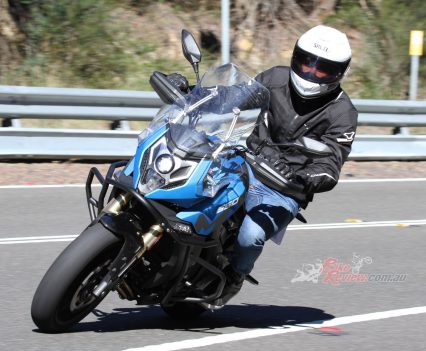 Plenty of room for the taller rider but a taller seat is on the wish list.

There has been a whole lot of interest and stares at the bike when parked up and everyone has seemed a little confused as to what it is. They’re often surprised when I say it’s a CFMOTO and it’s only eight grand ride away. Being a KISKA design, it looks a lot more expensive than it is. 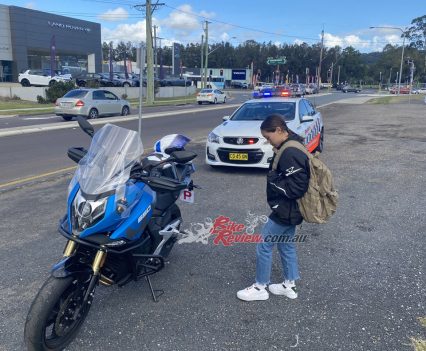 I was pulled over for a licence check as I had my partner Kirsten on board and I was displaying P Plates. All clear! 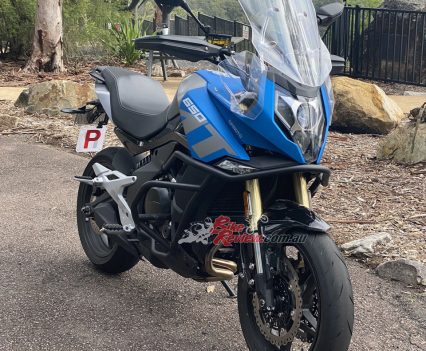 Out on a day trip, the bike is a great pillion machine.

While most of the rides have been commutes on the M1, I have had the chance to push it a couple of times up on my local roads and on a few weekend trips. It’s not quite as agile and nimble as some of the other LAMS bikes I’ve ridden of course but is very capable and stable. Handling is smooth and comfortable and the bike wants to lean, but lean at a rate that leaves you feeling secure. 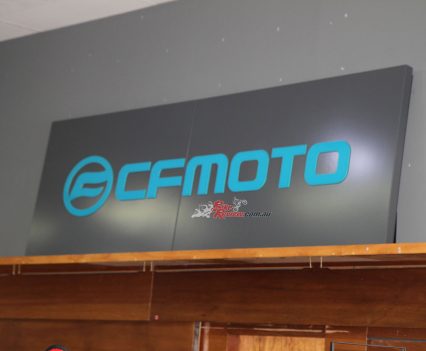 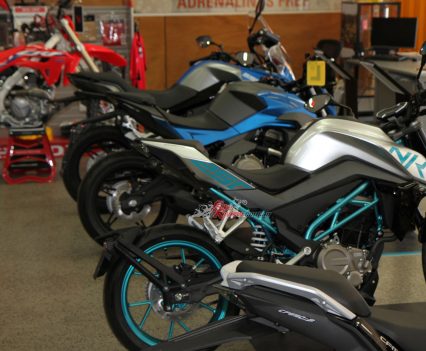 They have full stock of current models. 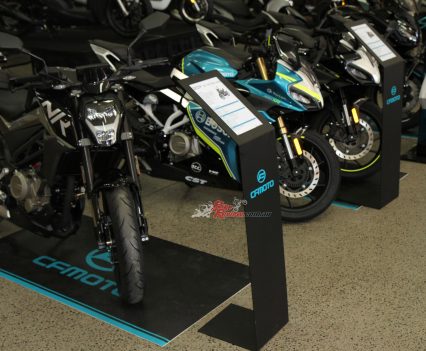 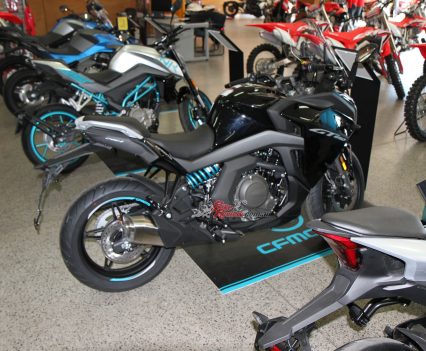 There are no twitches or wobbles and there is that feeling of security and stability that I love in a well-balanced bike. It’s not the fastest, but the 650cc engine has plenty of bottom-end grunt, which I’m assuming will come in nice and handy on the dirt soon. I know I’ve only had it for a 1000km or so, but I can’t stop raving about this thing! It’s just good! 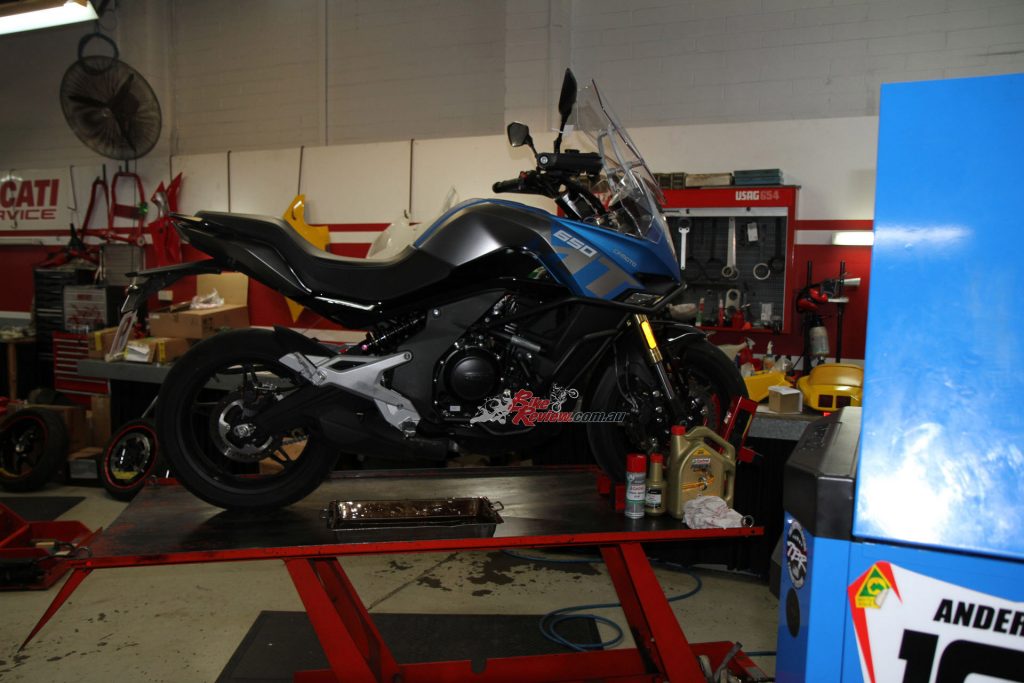 The shop was preparing to relocate to bigger and more modern premises and Dylan apologised for any mess. We thought it was immaculate to be honest!

The first service was done after the 1000km run-in, 1337km to be exact, and I took it up to the latest CFMOTO dealership in NSW, Fraser Motorcycles Newcastle, for them to sort it all out for me. The customer service was great and the bike has been running like a Swiss watch since… 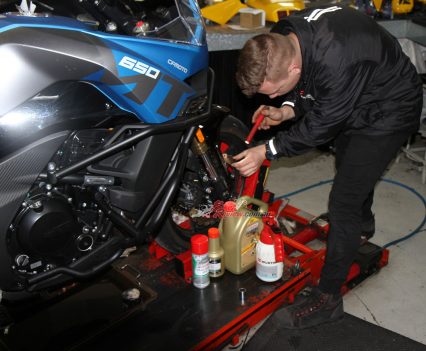 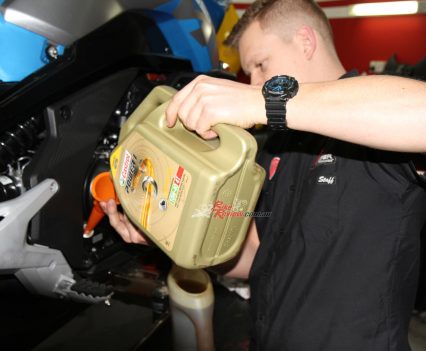 Fresh Castrol Power 1 will stay in for the next 4500km.

The initial service was $255 inc GST and we provided oil – it involved the following: 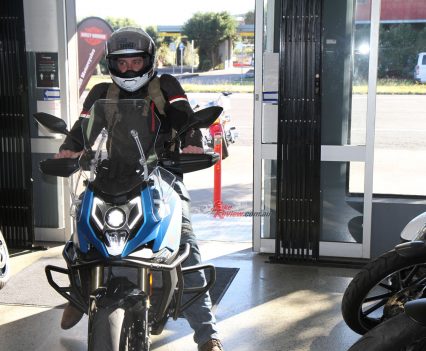 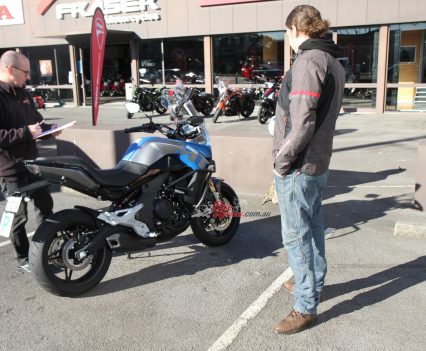 Fraser MC Newcastle will be moving from Broadmeadow soon. 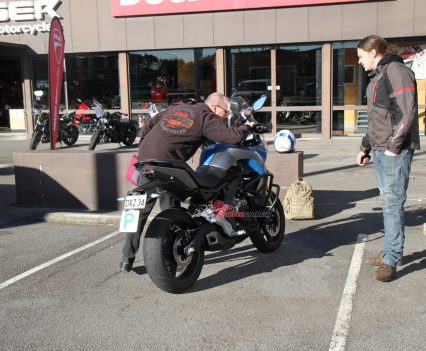 Josh taking the bike to the workshop. 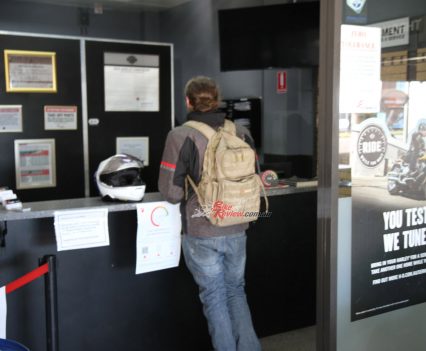 Booking in at service reception. 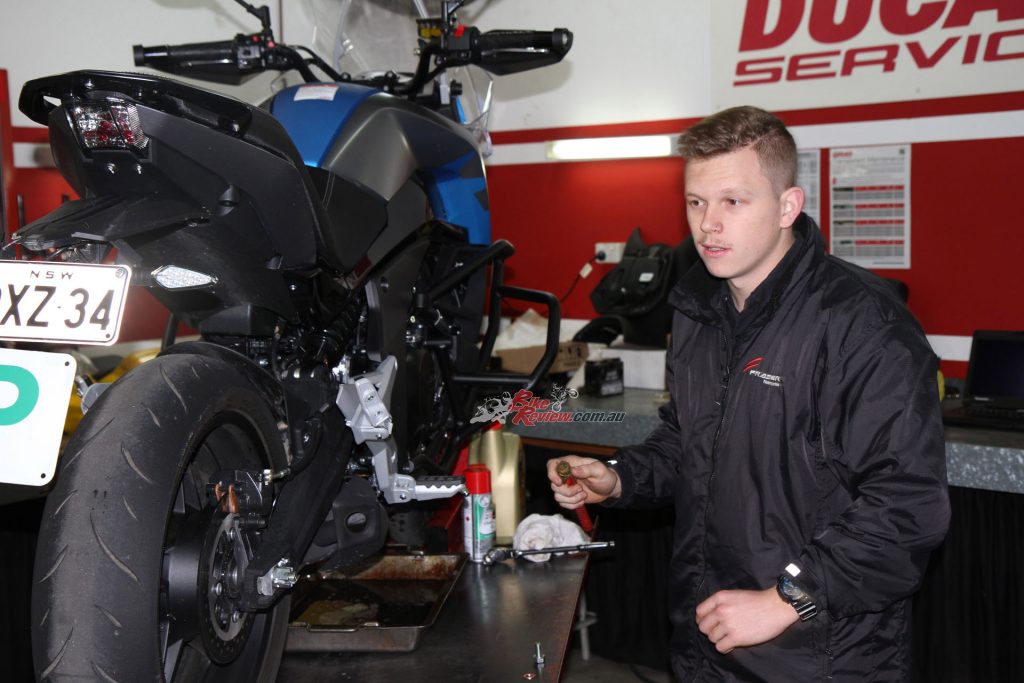 Dylan, a fully qualified Motorcycle Tech, is a switched on spanner twirler and enthusiastic about bikes.

All in all, it took about two hours. This would be quicker if Jeff and I weren’t there taking photos and chatting away. Our Technician, Dylan, was thorough and enthusiastic, he was super knowledgable and did an awesome job for us with the service as well as sorting a few small issues with the handlebars and throttle. Service Advisor Josh looked after us well and made sure everything was as easy as possible. Contact the Fraser CFMOTO workshop on (02) 4935 9800 to make a booking or email the friendly team at servnewcastle@frasermc.com.au 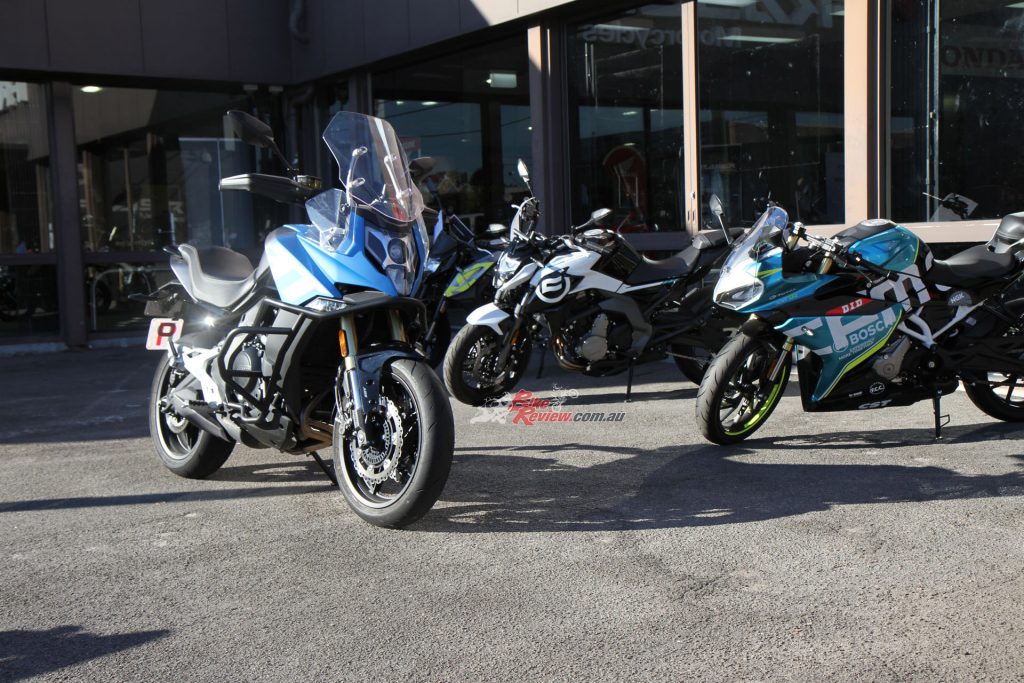 So far, I could not be more stoked with the value for money this bike provides. As we’ve got the street tyres on it, I haven’t had much of a chance to get it off the tarmac, however, we’ve got some goodies in store for it. I’ve already worn out the back tyre and we have a set of Avon TrailRider tyres on the way. 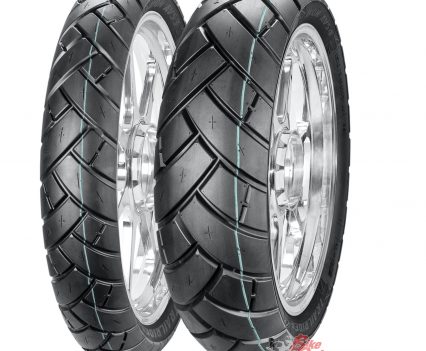 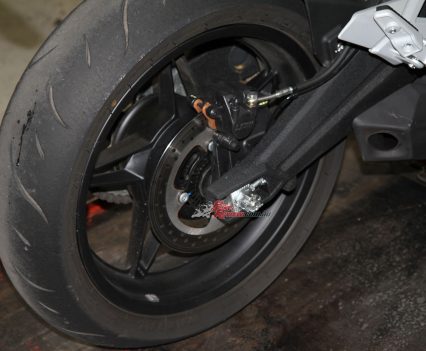 On the way for our long termer:
Some solid adventure tyres from Avon and some SHAD hard panniers and mounting kit and a washable performance Unifilter airfilter from the Genuine Accessories list for the CFMOTO 650MT. 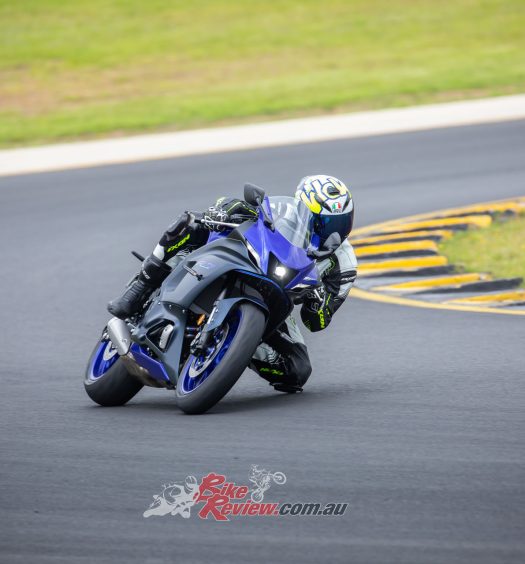 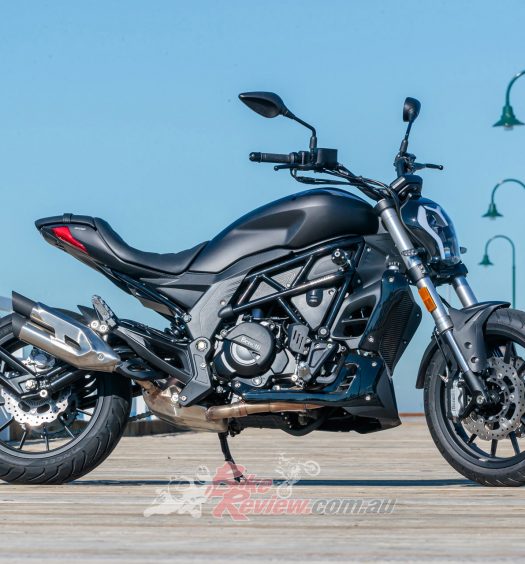